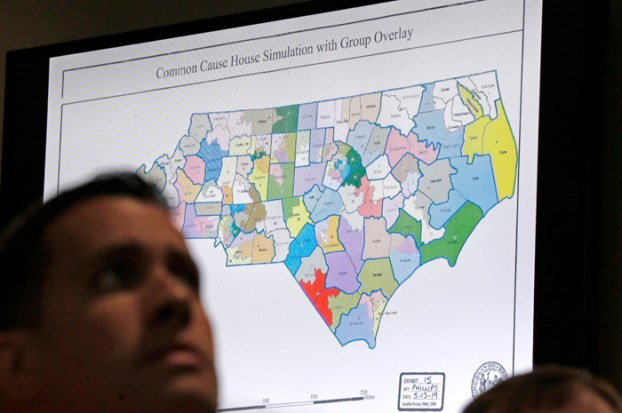 A districts map is shown as a three-judge panel of the Wake County Superior Court presides over the trial of Common Cause, et al. v. Lewis, et al at the Campbell University School of Law in Raleigh. Gerry Broome/Associated Press

NC trial looks at partisan bias after US justices won’t

RALEIGH — A partisan gerrymandering trial began Monday in which election advocacy groups and Democrats hope state courts will favor them in the kind of political mapmaking dispute that the U.S. Supreme Court just declared is not the business of the federal courts.

Lawyers for Common Cause, the state Democratic Party and more than 30 registered Democratic voters who sued contend Republican lawmakers so etched politics into the state House and Senate district lines that the constitutional rights of Democratic voters were violated. Republicans counter that the Democrats are simply asking courts to use “raw political power” to take redistricting responsibilities from the legislature.

The trial is expected to last as long as two weeks.

It commenced less than three weeks after the U.S. Supreme Court ruled in a separate case involving North Carolina’s congressional map that it’s not the job of federal courts to decide if boundaries are politically unfair. But Chief Justice John Roberts also wrote in the majority opinion that state courts could have a role to play in applying standards set in state laws and constitutions.

The plaintiffs in the case are seeking just that, saying 95 out of the 170 House and Senate districts drawn in 2017 violate the state constitution’s free-speech and association protections for them. They also say the boundaries violate a constitutional provision stating “all elections shall be free” because the maps are rigged to predetermine electoral outcomes and guarantee Republican control of the legislature.

A partisan gerrymandering lawsuit in Pennsylvania citing a similar provision in that state’s constitution was successful.

“State courts do not need to sit idly by while people’s constitutional rights are being violated just because the U.S. Supreme Court refused to act,” plaintiffs’ attorney Stanton Jones told a three-judge panel in Raleigh. His clients want new maps drawn for the 2020 elections.

Despite a large party fundraising advantage during the 2018 cycle and candidates in nearly every legislative race, Democrats could not win a majority in either the House or Senate — a failure Jones attributes to the skewed boundaries.

But the Republicans’ chief attorney, Phil Strach, said in his opening statement that the Democratic Party’s own scoring system shows the party could win majorities under the challenged plans — a contention that one Democratic lawmaker rejected in testimony later Monday. Democrats currently hold every House seat in Wake and Mecklenburg counties — the state’s two largest counties by population — but they are still challenging every district in those counties.

Democrats did pick up state legislative seats in 2018 under House and Senate maps that had been slightly adjusted compared to the 2017 plans. Republicans lost their veto-proof control last year but still hold majorities. Democratic Gov. Roy Cooper now has more leverage at the General Assembly, but by law he cannot veto redistricting plans.

Strach says state courts and the constitution already have put limits on redistricting that discourage egregious partisanship, while allowing for some consideration of partisan advantage and protecting incumbents.

“There is no way to know what a fair map looks like,” Strach said. “That would require the court to decide essentially how many Republicans and Democrats should be in the legislature.”

Jones said his clients plan to use files from Tom Hofeller, a now-deceased GOP redistricting consultant who helped draw the 2017 maps, to “prove beyond a doubt that partisan gain was his singular objective.”

Hofeller’s estranged daughter alerted Common Cause to the existence of his computer files, which were later subpoenaed. Stephanie Hofeller was deposed before the trial to describe how she discovered the files. The Republicans’ lawyers said the Hofeller files the plaintiffs want to use don’t prove the GOP legislators who ultimately approved the maps were led by excessive partisanship.

Some of Hofeller’s files ended up being used in separate litigation in other states challenging a plan by President Donald Trump’s administration to include a citizenship question on the 2020 U.S. census.

One of the Democratic plaintiffs, voter Derrick Miller of Wilmington, testified Monday that the lawsuit is “trying to unrig a rigged process and present a fair playing field for all.” Even if Republicans still won a majority under a fair plan, “it would burn a lot less,” Miller said.

The case marks at least the eighth lawsuit challenging North Carolina maps since the current round of redistricting began in 2011. The lawsuits resulted in redrawing congressional lines in 2016 and legislative districts in 2017 — both to address racial bias.

By Shavonne Walker shavonne.walker@salisburypost.com A Salisbury man was killed in a single-vehicle crash after his pickup left the road and... read more