Ask Us: When was the first Farmers Day? 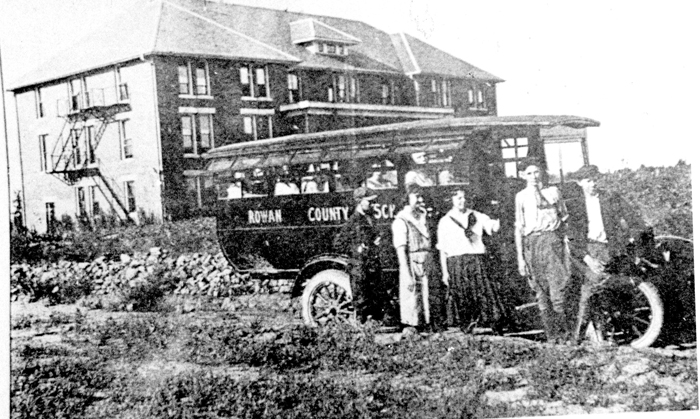 In 1921, students of the Farm Life High School in China Grove stand in front of one of the first public school buses in North Carolina. As part of Farmers Day this coming Saturday, the China Grove Roller Mill will feature a new exhbit, 'Farming in Yesteryears,' from 10 a.m.-4 p.m. Photo courtesy of Rowan Museum

Many might know that Farmers Day is held annually on the third Saturday in July in China Grove. But everyone might not know its origin.

A Post reader asked when the event started. According to Judy Haire, the first official Farmers Day was on July 17, 1982. However, Farmers Day had been held 79 years before, in 1903, according to a Salisbury Post report in 1982.

The modern version began as a street festival to honor local farmers and organize a farmers market. It has offered the public a chance to have fun.

Barbary Doby was involved in the beginnings of Farmers Day as chairwoman of the promotions committee of the China Grove Board of Trade, which sponsored the event.

“We just wanted to bring something to town for everyone,” Doby said, noting that many people were involved in beginning the tradition. As for how it has grown over time, “one farmer just told another,” she said.

Even the first Farmers Day included many of the traditions that are commonplace now.

Along with a farmers market, there was an entertainment stage and street dance and the Little Mr. and Mrs. Farmer contests.  Salisbury Post reports noted that a dunking booth was popular among younger attendees and an antique steam tractor sounded its whistle as it ran throughout the day.

This year’s Farmers Day will be Saturday. It will feature arts, agriculture, food and craft vendors. Keeping with its roots, it will also have an antique tractor display, along with local products for sale.