Off to the races: Local businesses get ready for Dragon Boat Festival 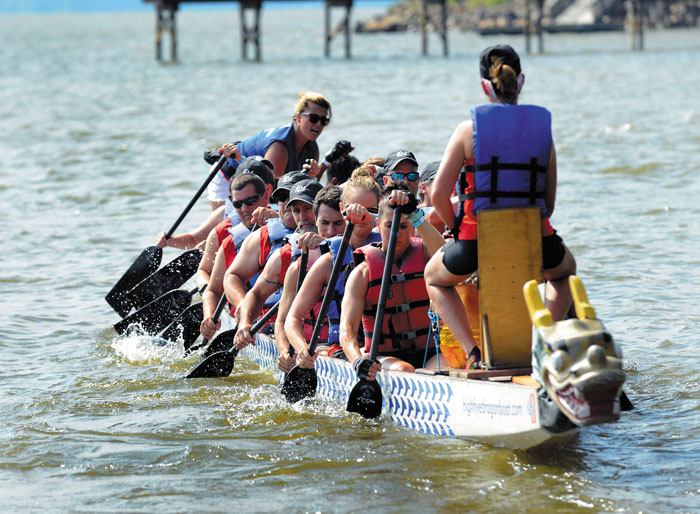 SALISBURY — The Rowan County Chamber of Commerce’s Dragon Boat Festival is a day of friendly competition, when co-workers try to work in unison to win the race, said Lori Jordan, an electronic service retail specialist with F&M Bank.

The sixth annual festival is set for July 27. The largest annual event on High Rock Lake, the festival is free to spectators.

Dragon boat teams will compete in a 300-meter course. This year, there are roughly 30 teams, said Rowan County Chamber of Commerce President Elaine Spalding. This is marked growth from the first year, Spalding said, when the race had 16 teams.

Once people see how fun the festival is, they want to compete in the race the next year, said Jordan, who has been on the F&M dragon boat team for all six years.

The race is inspired by a 2,300-year-old tradition in ancient China, where people dressed in dragon heads, tails and scales raced in 45-foot sleek boats. Drummers traditionally accompanied the paddlers sitting at the rear of the boat.

The idea to use dragon boats in Rowan County came after chamber members looked at ideas from chambers across the country, Spalding said.

Originally, the chamber considered a golf tournament, Spalding said, but with so many golf tournaments in the area already and with dragon boat racing being one of the fastest-growing activities in the country, creating the Rowan Chamber Dragon Boat Festival was the ideal choice. It is a way to highlight High Rock Lake, the eastern part of Rowan County and local businesses, she said.

The festival is more casual than a business lunch or networking event, but in a lot of ways, it has the same benefits, she added.

The festival also offers a taste of downtown Salisbury and its businesses, said Joyce Caron-Mercier, who is helping organize the festival. It is a way to showcase all the unique things Rowan County has to offer and for people to find out what Salisbury has to offer, she said.

With only two weeks until the race is underway, employees at local businesses are looking forward to the race.

The chamber does a great job of involving local businesses, including new one, said Blabon, who is vice chairman of the Chamber of Commerce. The festival brings a lot of visibility to Rowan County and local businesses, he said.

Blabon said Novant Health is lucky to be a sponsor and participates every year. Blabon himself participates in the race.

First, the race is a physical activity. As such, it’s a way to promote wellness and bring awareness to a healthy lifestyle throughout the Rowan County community.

Second, the festival fosters teamwork among employees, Blabon said. The boat doesn’t go forward if you cannot get everyone on the lake to participate in the race.

Other participants agreed with Blabon.

“For Trinity Oaks and Lutheran Services, it is all about team-building and supporting our community and the Rowan Chamber,” said Teresa Dakins, community outreach coordinator for Trinity at Home. The festival is a great way for employees to get to know each other, she said.

“One year on our team, we had a young certified nursing assistant that did not know how to swim, had never been to the lake, (who) decided she would join the team and row,” Dakins said.

Dakins asked the CNA why she participated if she didn’t know how to swim. The CNA replied that it was because she trusted her teammates and knew that they would “protect her if anything happened,” Dakins said.

“This is what true teamwork is all about: Trust and believing in each other,” Dakins said.

Some Trinity residents will volunteer to be on the dragon boat team, she said.

Dakins said this is her third year as chairman of the festival and the sixth year that Trinity Oaks and Lutheran Services will participate.

“It is a wonderful fun-filled day on the lake and brings together a lot of different people from all over Rowan County,” she said.

Katelin Rice is the community development manager for Hotwire, a sponsor of the festival. Hotwire is able to support the chamber as well as “engage with local community members and businesses,” Rice said.

This is Hotwire’s second year participating and the staff loves it, Rice said.

Jeff Moose, the owner of Backcountry and Beyond, said this will be Backcountry’s first year as a festival vendor but the second year participating.

Moose said it is exciting to participate in the festival.