A journey of self-discovery: DaQuan Coleman talks path to college 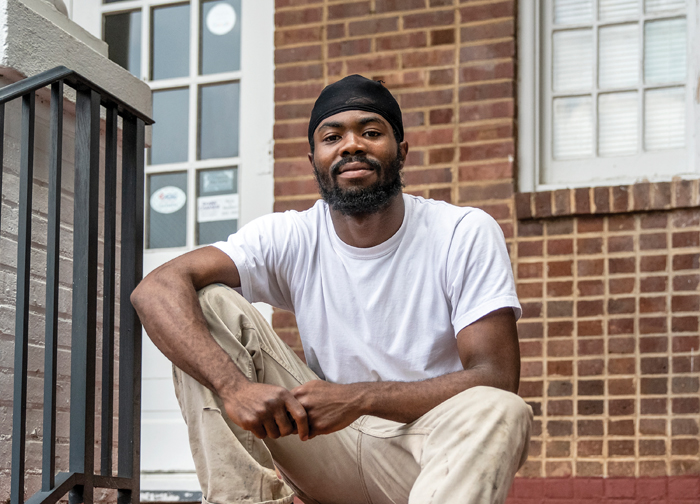 As 21-year-old DaQuan Coleman reflected on the path leading to his upcoming matriculation to Livingstone College, he sat, arm hooked over the back of his seat and eyes narrowed in recollection.

Point A on the path, it seemed, was hard to pinpoint: Coleman’s journey has navigated family struggles, domestic violence, his own experience within North Carolina’s prison system and more, he said. All have led to his recent attainment of a GED through Rowan-Cabarrus Community College and, soon, his studies at Livingstone.

But one constant and early cultivated passion has served as guiding light along the path: “I’ve always loved the mythology of a hero: the journey a hero takes when he starts from rock bottom, learns and trains himself and gets to the point where he actually becomes a hero,” said Coleman.

Coleman said his venture toward his own rock bottom began early in life, first with the incarceration of his mother and, later, as she struggled within an abusive relationship.

“After a while, you start to internalize those things,” said Coleman. “You start to believe that those things are normal because it’s happening every day, you see it every day.”

So he began lashing out, with struggles inside of school eventually extending outward. Coleman said he was incarcerated first in high school following a retaliative theft.

When he was released, he said his focus shifted to providing for his younger brother, “so he could go to school and be all right,” he said.

His methods of provision — once more through theft — ended with his return to the prison system. This time, he said, he was behind bars for two years.

“In the midst of this, I really did a whole lot of transformation,” he said. “I started being around male figures who really had a type of militancy to them and they started pointing out things in myself that I need to change.”

His biggest change would come 23 months into his incarceration, he said, when he received word that his brother had passed away just days before his junior year of high school.

“When my little brother died, my whole world did a 180. I’ll never forget when they told me,” said Coleman. “… I was devastated.”

He took a plea deal in order to be able to come home and be with his family but said he struggled with the sudden freedom following months of time behind bars.

“I couldn’t look anybody in the eyes. I always thought people were thinking about me in a judgmental, negative way,” he said. “I was far removed from the reality of what life really was.”

Directionless and impulsive, he said he once more found himself behind bars in 2017, missing the birth of his son during the nine-month stint.

To do so, he began his effort to earn his GED through a Rowan-Cabarrus satellite program at the Salisbury-Rowan Community Action Agency. There, he met coordinator Shanikka Gadson-Harris, who had also gone through the program, moving on to earn her associates, bachelor’s and masters degrees.

“It was really like an eye-opener,” said Coleman. “Like, ‘yeah, I’ve actually got the potential to be somebody.'”

He completed the program this year, walking across the stage during Rowan-Cabarrus’ graduation ceremony this May.

But through it all, his 2017 charges for robbery with a firearm loomed — along with the potential of a 23-year sentence: “It hindered me from having foresight because I thought there was a possibility I wasn’t going to be here for too much longer,” said Coleman.

Then he remembered his last words to his younger brother, when he had visited him in prison: “Bro, we’re going to change the world.”

Step No. 1 in changing the world, he said, would start with impacting the community around him, the struggling neighborhoods of Salisbury-Rowan.

“I realized that’s the biggest thing that strikes my community is that people let their surroundings define them,” said Coleman. “We’re not building upon ourselves, we’re not building a future for ourselves or our kids. We allow society to deem that this is hell and somewhere else is heaven.”

And with that mentality, potential for forward momentum was leaving the area: every person left represented one less hand building the community, Coleman said.

“So I realized my life is for service,” he said. “I had to significantly change myself in order for others to see that they could change themselves.”

Shortly following this realization, Coleman’s charges were reduced and he was given probation and, as he calls it, a new lease on life.

“I stopped living for myself and started living for a higher purpose,” he said. “I believe because of that, a higher entity is looking out for me.”

And his work in the community is only just beginning. Together with donations from his community church, Providence AME Zion, he’ll begin an effort to distribute meals to and engage with his local community. He’ll also study sociology at Livingstone in the fall.

All was an effort to build a foundation for growth, Coleman said.

“My life has been a journey of self-discovery, a journey of finding all the resources that lie within my own interbeing, … and allowing them to resonate through my day-to-day interactions,” he said. “The more we relate to each other in a positive, united way, the more we reach and aim higher as a whole.”