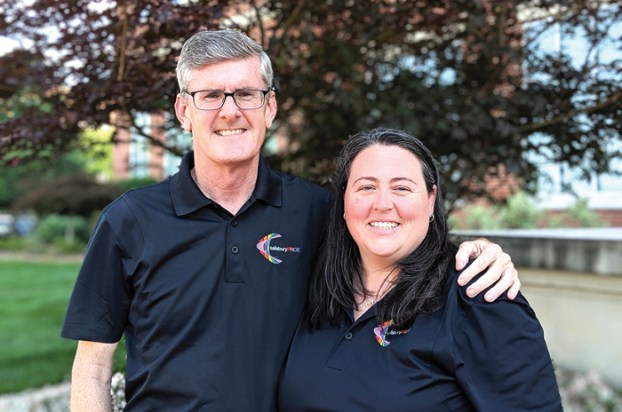 Submitted photo Tim Coffey and Becky Lane, the new president and vice president of the Salisbury Pride board of directors.

The board of Salisbury Pride has elected new officers.

Tim Coffey is the new president, and Becky Lane is the new vice president. They were elected last year by the board and assumed their duties on July 1. Coffey joined the board in 2016, and Lane joined in 2017.

“I’ve been so impressed by all that Salisbury Pride has done and the tremendous impact we’ve had on the community,” said Coffey. “The visibility Pride brings to LGBTQ+ issues is vital. Our Pride festival is the most visible event we stage, but there’s so much more that we do throughout the year. As a gay man, I know how important Pride organizations are.”

“Salisbury Pride has the opportunity to play a pivotal role in the lives of members of the LGBTQ+ community in Rowan County,” said Lane. “We hope to change hearts and open minds through our presence in Salisbury and our efforts to educate people on the ongoing struggle for equality.”

Coffey is a professional photographer. He moved to Salisbury five years ago from Connecticut. While a member of the board, he has worked on fundraising, festival logistics and marketing.

Lane, a native of Greenville, South Carolina, works in visual communications for N.C. State Extension at the N.C. Research Campus. She’s been a member of the Pride marketing and community awareness committees.

“We’ll forever be thankful for Beth and Maryja’s tireless efforts to make Salisbury Pride a reality,” Coffey said. “Their leadership over the last couple of years has been tremendous.”

Associated Press RALEIGH — An attorney for the state school superintendent has been named the state Republican Party’s next executive... read more