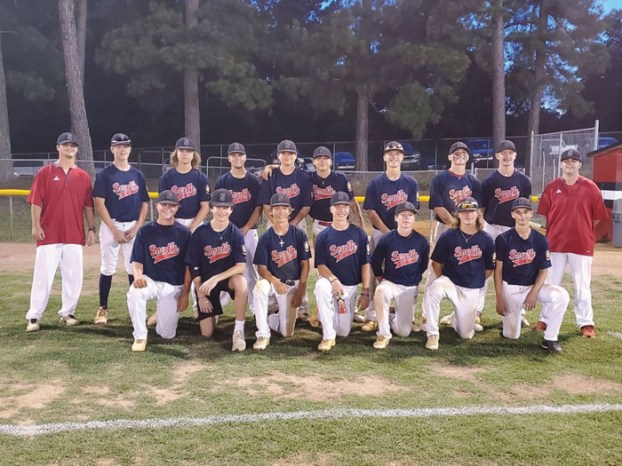 Twitter photo ... The South Rowan Junior American Legion team, 22-4 on the season, has earned a berth in the state tournament, July 18-23, in Thomasville.

LANDIS — The American Legion baseball summer continues in Rowan County this week, although the players will be a little younger than the ones fans have been watching at Newman Park.

South Rowan will be competing in the Junior Legion State Tournament from Thursday, July 18, through Tuesday, July 23. That double-elimination event will be played at historic Finch Field, which is technically in Thomasville, but is located only 3.2 miles from downtown High Point. The Post 87 Hi-Toms will serve as the host team.

“It’s just our second year as a Junior Legion program, so making the state tournament is a big deal for everyone,” said South Rowan High head coach Thad Chrismon, the manager of  Junior Legion team. “Rowan County had five Junior Legion programs this year (South, East, West, Carson and Salisbury/North) and all of them were pretty strong. That says a lot about the talent pool in Rowan. All those Junior Legion players mean a bright future for the high schools in the county and a lot of them also will help the Rowan County Senior team.”

The head coach for South’s Juniors is Grayson Miller, South Rowan High’s jayvee coach. The pitching coach is left-hander Brandon White, who was a standout at North Rowan High and pitched on state-championship Rowan County Legion teams. In 2016, White pitched for the Rowan squad that was runner-up in the World Series.

Miller played strong safety for Northwest Cabarrus football teams not long ago, but his main sport was baseball. He was the catcher for the Trojans in the days when they had players such as Corey Seager, Tanner Bigham, Jarrin Hogue and Weston Smith.

Miller and White were both on the team at Belmont Abbey College. That’s where he and White made a connection. Both had a love for baseball. Both wanted to get into coaching.

“When I got out of school, I wanted to stay around the game,” Miller said. “I was hoping to go back to Northwest Cabarrus to start my career, but they didn’t have any openings. But Joe Hubbard (Northwest’s long-time head coach) told me they were looking for a coach at China Grove Middle School.”

Miller was hired to coach at China Grove at an opportune time. In 2018, he coached a strong group of eighth-graders that included Ty Hubbard, Joe’s son, and Nathan Chrismon, Thad Chrismon’s son.

Coach Chrismon was impressed with what he saw from Miller. That led to Miller serving as South’s head jayvee coach for the 2019 season and also working with varsity catchers Jarrid Nelson and Drew Watkins.

Now Miller has guided South to a 22-4 Junior Legion summer that included  a conference championship and hard-fought, best-of-three playoff sweeps against West Rowan and Randolph Red. South came from behind in all four playoff games, winning 8-5 and 6-5 against West and 5-4 and 6-5 against Randolph.

“I’m a little surprised at how good our record is, but we do have a really resilient team,” Miller said. “We won a lot of games on nights when we didn’t play our best. We just found a way to win. We gutted out a bunch of games, showed a lot of grit and determination.”

Miller gave White all the credit for the success of South’s hurlers.

“Brandon’s got that part of it down, and I didn’t have to worry about it,” Miller said. “We’re lucky to have him. When it was time for me to fill out the lineup card, I’d ask Brandon who was throwing for us.”

All the players on the team will be at South Rowan High next school year.

South’s players range in experience from right fielder Drew Huffman, an-all-county and all-conference rising senior who also is the starting QB for South’s football team, to  a pair of rising freshmen — Cayden Moore and Haiden Leffew.

The core of South’s team consists of rising sophomores and juniors.

The pitching staff has relied mostly on the arms of Huffman, Luke Hiskey and Jackson Deal. Chandler Oddie has closed quite a few games. Leffew, Carson Crainshaw and Colton Fisher are among the pitchers who have contributed valuable innings.

Miller said Jacob Ritchie has been “a rock” as the team’s starting catcher.

South’s home field has unusual dimensions, with a short left-field porch and a right-field fence that is 390 feet from the plate. Right-center at South is vast. Basically, you need two center fielders to cover all that outfield territory at South, and Miller said South benefited from stellar defense from Huffman in right and Kane Kepley in center field.

“Kepley and Huffman got to balls I didn’t think they had any chance to get,” Miller said. “You’d think it was over their head, but you’d look up, and they were camped under it.”

Hubbard, who started at second base for the high school team as a freshman, anchored the Junior Legion infield at shortstop. Jack Weaver, who made the all-county and all-conference teams as a sophomore for South, played third base, with Joseph James at first base and Patrick Holden at second base. Deal and Hiskey often played in the infield when they didn’t pitch in order to keep their bats in the lineup.

“We played a lot of close games and we had some tough weeks,” Miller said. “When you play teams like East Rowan and Carson in the same week, that’s a tough week, but it’s also a fun week for our players and fans. Rowan is a baseball-rich county. You have to bring it every night or get left behind.”

Chrismon explained that no Area III championship series will be played. The Oak Grove/North Davidson team that eliminated East Rowan from the playoffs in the semifinals, will go to the state tournament as Area III’s No. 1 seed, while South will be the No. 2 seed. South’s players and their families had postponed vacation trips since school let out. They’re going to take that break prior to the state tournament.

“We’ll have everyone back for the state,” Miller said. “We’ve got a number of football guys who have been putting in very full days with two sports, and they do need a break.”

South’s schedule for the state tournament will be announced in the next couple of days.