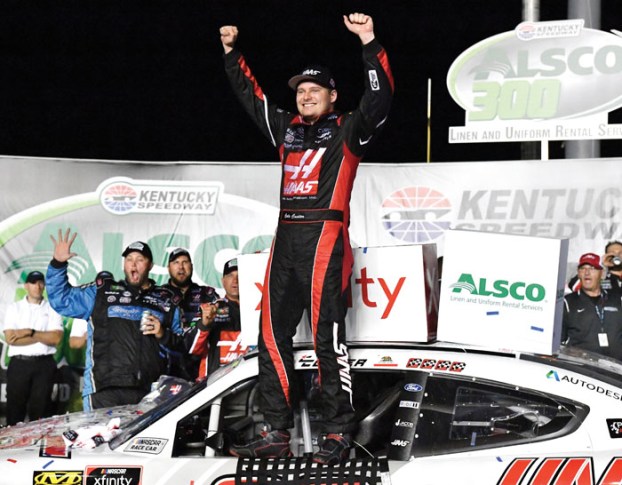 SPARTA, Ky. (AP) — Cole Custer was never really challenged down the stretch. He just acted like Christopher Bell was in his rear-view mirror, an approach that motivated him to keep a safe distance.

Custer grabbed an Xfinity Series-high fifth victory of the season Friday night with a win over Bell at Kentucky Speedway.

“He got a little close and I was definitely sweating a little bit,” said Custer, who fell backward off his car during the victory lane celebration. “He was definitely our competition there at the end, but we had the better car. I was sweating after that green flag pit stop because he closed in on me and I had trouble with lappers, but we had a good enough car to pull away.”

Custer, Bell and reigning series champion Tyler Reddick have dominated the series all year and finished 1-2-3 at Kentucky. Bell, who has four wins this season, won the first two stages and led 72 laps. Reddick, the series points leader and a three-time winner this season, didn’t lead a lap.

“We were able to win the two stages, so we got a couple more playoff points,” Bell said. “Just got to work on a couple more things and we’ll be good.”

It was Custer who dominated by leading 88 of the 200 laps in a Ford for Stewart-Haas Racing. He took the lead for the final time on lap 155 and beat Bell by 1.651 seconds.

Michael Annett and Chase Briscoe completed the top five. Only the top five cars finished on the lead lap.

Custer has now won consecutive races on 1.5-mile tracks following his win at Chicago two weeks ago. He’s won three of the last six races and has seven career wins in 88 Xfinity starts.

Reddick leads the point standings by 67 over Bell.