Cokie and Steven V. Roberts: The only certainty is uncertainty 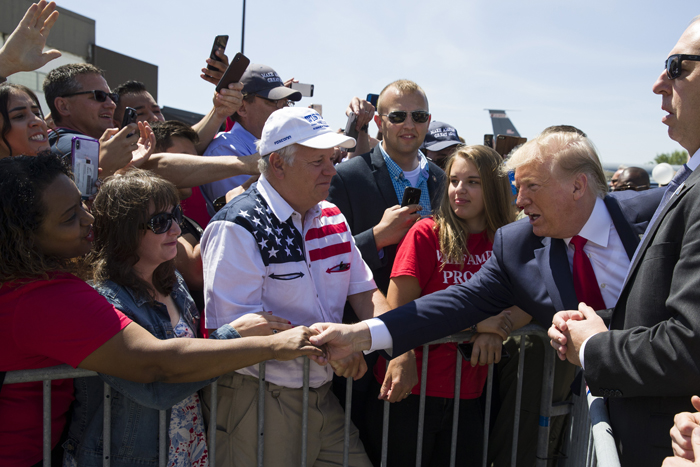 There is no clarity in the presidential race at this point, no obvious favorite, no predictable outcome. Every factor that favors President Donald Trump or the Democrats is balanced out by a negative trend. A victory — or a defeat — for either party is totally plausible.

Start with some good news for the president. In the latest Washington Post/ABC News poll, Trump’s favorable rating climbs to 44% among all Americans and 47% among registered voters. That’s the highest mark of his presidency in that survey and close to Trump’s average positive rating in all national polls: 45% of registered voters.

But look at the negatives: 53% disapprove of the president’s performance in office. As ABC pollster Gary Langer points out, Trump has never commanded a favorable rating from a majority of Americans, and that’s “a record for any president in modern polling” after 2 1/2 years in office.

Trump’s bump in popularity is clearly related to a strong economy, which has added jobs for 105 straight months. For the first time in the ABC/Post survey, a majority, 51%, approved of Trump’s handling of economic matters.

Then there’s the downside. Only 38% give Trump credit for good economic news, while half say the Obama administration is really responsible. And trade tensions with China and slow growth in Europe could undermine voter optimism before the election.

Moreover, a majority gave the president negative marks on eight other issues tested by the pollsters. For example, only 2 out of 5 applaud his record on immigration and foreign policy, and that drops to 29% on climate change.

A recent Monmouth poll asked whether the president “was giving enough attention to issues that are important to their families.” Only 41% said yes, and 55% said no. Men were evenly split on the question, but by almost 2-to-1, women objected to the president’s priorities.

Trump’s personal qualities influence voter preferences even more strongly than his detailed policies, and 65% told the ABC/Post survey that he acts in an “unpresidential” manner, while only 28% found his behavior “fitting and proper.” Yet 1 in 5 voters who view him as “unpresidential” like his overall performance, a strong sign that his brutishly unconventional approach to the office is actually a good thing to many of his core supporters.

Another positive for the president: For all the talk about impeachment generated by Democratic liberals, the idea of overturning the last election falls flat with the general public. Only 37% favor removing Trump from office, with 59% against.

But denying Trump a second term through the ballot box is a very different question. A Monmouth poll reports only 37%, Trump’s hardcore base, favors his re-election, with 59% opposed. The anti-Trump feelings are concentrated among women (68%), whites with college degrees (63%), voters under 35 (64%) and nonwhites (78%).

As always, however, their animosity is balanced out by groups that like the president. Men and whites are evenly split, and whites without college degrees favor a second term for Trump by 31 points.

On the Democratic side, their best news is contained in an ABC/Post question about the “intensity gap.” Of voters who oppose Trump, 73% say it’s “extremely important” to deny the president a second term, while only 52% of Trump backers feel that strongly about re-electing him.

All votes are not equal in politics; intensity matters enormously, and the party that can capture that emotional edge has a huge advantage. The only nonincumbent Democrats to win the presidency since World War II — Kennedy, Carter, Clinton and Obama — all benefitted from an intensity bonus.

At least for now, however, the intensity gap favoring Democrats is based largely on anti-Trump feelings, not enthusiasm for any of his possible opponents. Joe Biden remains the favorite among Democratic voters, but his margin is fueled mainly by the feeling that he can beat Trump, not by any real excitement about the kind of president he would be.

His advantage is rooted in practicality, not passion, which raises the issue: Can he take full advantage of the intensity gap? Would voters be for Biden and not just against Trump?

That’s one of many unanswered questions 16 months before the election. Everybody’s crystal ball is clouded and cracked — including ours. The only certainty is uncertainty.