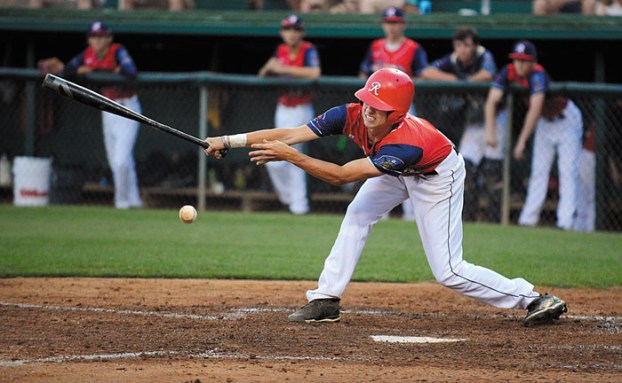 SALISBURY  — Throwing a fastball to Rowan County American Legion masher Luke Barringer is like waving a meaty bone in front of a hungry pit bull, but Jake Brown’s 2-and-2 pitch caught a decent chunk of the plate, about belt high, and it surprised Barringer, who couldn’t pull the trigger.

As the plate umpire raised his right arm without hesitation to acknowledge a called strike three, both of Brown’s arms went in the air in celebration. Rowan fans started drifting toward a packed parking lot in stunned silence.

That pitch by Brown, Davidson County Post 8’s gutty catcher/closer, finished off a 7-4 victory on Friday night and finished a remarkable series. Davidson County took the best-of-five series three games to one, even though a lot of people assumed right down to the final pitch that Rowan would come back — because Rowan almost always comes back, especially at Newman Park.

Rowan, one of the Area III representatives in the last four straight state tournaments and back-to-back state champions in 2015 and 2016, saw its season crash to an abrupt end in the second round of the playoffs for the first time since 2006 when a Kyle Seager-led Kannapolis team edged Rowan in a wild, decisive game at A.L. Brown High with the aid of a bad hop and a controversial HBP.

“Davidson got the two-out hits and they got the two-strike hits,” Gantt said. “They were the better team in this series and the team that deserved to win. It was their game and their series. For us, it just wasn’t meant to be this time.”

Davidson county acting head coach Keaton Hawks used to play the outfield for Gantt’s Catawba Indians at Newman Park, so it couldn’t have been much more emotional for him.  But he stayed low-key. He praised Rowan, hailed its rich history, lauded its avid fan base.

“Timely hits are the key to winning, and we were fortunate enough to get them the whole series,” Hawks said. “Our guys did a great job and we beat a great team. This is so big for our program and our community.”

Davidson hadn’t beaten Rowan in a playoff series in this century, not that they’ve played all that often. Since Davidson shifted to the Northern Division of Area III, its primary roadblocks have become the Northern Division bullies Randolph County and High Point. Both of those programs are still alive in the playoffs, along with upstart Mocksville, which put away Concord on Friday.

Davidson County will host Mocksville in Game 1 of a best-of-five Area III semifinal series on July 15.

Davidson starting pitcher Drew Wright got roughed up in an inning of work against Rowan in a Game 3 loss on Thursday, but he was equal to the challenge in Game 4. He carried the game to the seventh inning for the WartHawgs (17-8) with a poised effort.

“Rowan obviously has a great-hitting team,” Wright said. “But I felt like I had this game under control. I was able to mix in some soft stuff and locate my fastball away. I just threw the best I could. I have a lot of faith on our offense, and I knew if I could hold Rowan down a little bit we had a great chance.”

Rowan (23-13) struck first against Wright when Barringer demolished a pitch leading off the second. It was his 10th homer of the summer, a rocket headed in the general direction of Mars.

Rowan made it 2-0 later in the inning. Bo Rusher thumped a loud double off the right-field wall. He got to third on Zeb Burns’ bunt single and scored on Jordan Goodine’s groundout.

But after that speed bump, Wright, a West Davidson graduate who will be a regular student at Charlotte this fall, found a groove.

“There’s a lot of grass out there, but we kept hitting fly balls,” Gantt said. “Their outfielders were playing deep, and they kept running those fly balls down.”

Rowan failed to score in the third, fourth, fifth and sixth. Wright’s precision enabled his teammates to take control in a hostile environment.

“Drew competed and he located,” Hawks said. “He stayed calm no matter what happened. He pitched his butt off.”

Rusher, a Salisbury High grad who competed against Wright frequently in the Central Carolina Conference, knew the opponent better than anyone.

“I probably played against Wright 10 or 12 games in high school,” Rusher said. “He’s a good pitcher, and on nights like tonight when he’s throwing three pitches for strikes, he’s a really good pitcher. He mixed in a curve and changeup just enough to keep us off-balance.”

Rowan’s strike-throwing lefty Daniel Durham had been the winning pitcher in relief on Thursday, and he took the ball to start this one. For three innings, all went well. The balls Davidson hit hard early were at defenders. Wayne Mize made a diving catcher in center. Barringer made a running snag in right.

“Daniel came out strong and was hitting spots,”  said Rusher, Rowan’s catcher. “He gave us everything he had, but then he started getting a little tired and he got some pitches elevated a little bit, and that’s a team with a lot of good hitters.”

The best hitter on a team full of them, Wingate rising sophomore Carson Simpson smashed a triple off the right-field wall to start the fourth for the WarHawgs. That sudden blow was the trigger for Davidson’s comeback.

“I was sitting on a fastball and got a great pitch to hit,” Simpson said.

“Our top of the lineup guys — Landon Hilbourn and Simpson — did a great job of getting on base and getting innings started for us in this series,” Hawks said. “The other guys just fell into line behind them.”

The top of the fifth inning was more of the same. Hilbourn lashed a single to start it. Durham made a good pitch to Simpson and got a ground ball that  would’ve been a double play if it had been another foot toward Rowan shortstop Burns. Instead it skittered through the hole into left field, Durham’s night was over, and Davidson had another inning rolling.

Brown hammered a two-run double down the left-field line off reliever Scout Nichols for a 5-2 advantage. Stewart’s RBI single made it 6-2.

In the top of the seventh, Rowan turned a double play to empty the bases with two men out, but Davidson was undaunted and still tacked on an insurance run when Zack Cates doubled and Stewart, who had three RBIs, singled.

Rowan was down 7-2 heading to the bottom of the seventh, but the seats were still full. Fans clapped. Fans stomped. Fans still believed.

Wright was tiring. He got ahead of No. 9 batter Steven Smith 1-and-2, but then walked him. The clapping got louder. Jordan Goodine smoked a liner to center. Jackson McAllister dove for it and almost caught it, but then it was by him. Smith scored. Goodine wheeled into second base. It was 7-3, and the crowd was buzzing.

“I’d told our guys their crowd was going to be into it, that there was going to be a lot of energy here that was really going to help Rowan,” Hawks said. “I thought we did a good job of not getting rattled.”

Cole Hales hit the ball hard, but on the ground, and second baseman Hilbourn handled it cleanly for the first out.

Then Mize whacked a ball up the middle that is normally a hit at the Legion level, but Simpson, the Davidson shortstop, got to it with a headlong dive and smothered it. Then he got up quickly and made an accurate throw. Mize was out on a bang-bang play. If Simpson doesn’t make that play, everything changes.

“I saw it off the bat and got a good jump,” Simpson said. “After that, it was just reaction.”

Goodine scored on that play, but now there were two men out. Wright went right after Rowan slugger Chandler Lippard, who limped through the series on a balky hamstring. Down 0-and-2, Lippard still wouldn’t go quietly. He crushed one toward left-center and beat the throw to second base with a painful, hobbled sprint, and then a slide.

Barringer was next, and there’s always a hush whenever the 6-foot-4 tower of strength strides to the plate. But Brown relieved Wright, who had thrown 96 pitches, and Brown won the battle with Barringer on his fifth pitch. Brown, who is headed to Pfeiffer, earned a save in all three Davidson wins in the series.

“These were stressful games, but they were really fun games to play,” Hawks said. “Coming here and competing against Coach Gantt and his program, it just felt right.”

Gantt was disappointed, but there was some pride in Hawks that seeped through his disappointment.

“Our guys competed, gave everything they had, and this was an enjoyable team to coach,” he said. “It’s not easy to lose and it always hurts to lose, but it’s a little easier when you lose to a good team and to good people. Davidson played a great series, and Keaton coached a great series.”

NOTES: Hawks coached this series, due to Post 8 head coach Dan Tricarico making frequent trips to Wilmington to visit his ailing father. … Simpson and Rowan pitcher Daniel Sell are first cousins and faced each other in the top of the seventh inning. Simpson walked. “We’re pretty close,” Simpson said. “So it was hard to keep a straight face.”