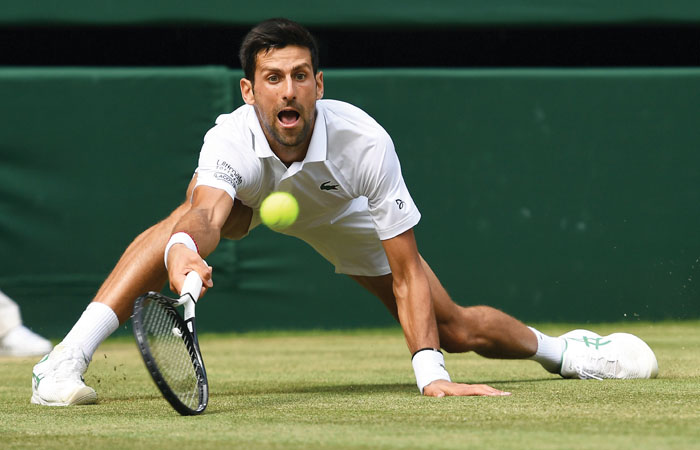 By MATTIAS KAREN Associated Press
WIMBLEDON, England (AP) — Going by the number of strokes, it was the longest point ever recorded at Wimbledon.
And for Novak Djokovic, it went a long way toward putting him into another final at the All England Club.
After exchanging dozens of strokes during the third set of his semifinal match against Roberto Bautista Agut on Friday, Djokovic finally smacked a backhand down the line with the 45th shot of the rally to save a break point. The defending champion held serve to make it 5-2 and went on to win the match 6-2, 4-6, 6-3, 6-2.
According to official statistics, the 45-stroke rally was the longest at Wimbledon since they started tracking point lengths in 2005. But for Djokovic, the important part was the impact it had on what was a very closely-fought duel up until that stage.
“At one stage of the match, it could have gone (a) different way. Was very close in the third set,” said Djokovic, who faces Roger Federer in Sunday’s final as he goes for a fifth Wimbledon title. “Couple of very long games when I broke his serve and he had some break points, a very long rally. I managed to make a winner down the line with a backhand. Obviously winning that game was crucial for me. It gave me more confidence and relief so I could swing more freely in the next games.”
Aside from the number of strokes, the point itself was perhaps not that memorable. For much of it, both players seemed content with just hitting the ball back over the net and waiting for the other to make a mistake. The last 18 strokes were all crosscourt backhands, with the players remaining in more or less the same position until Djokovic finally switched it up with his shot straight down the line.
That was at 30-40, and Bautista Agut had missed a previous break point as well at 15-40, which he said made him a bit more cautious on his second opportunity.
“I had an easy forehand (on the first break point). I went too much for it,” the Spaniard said. “Then the next point I wanted to play — I didn’t want to take a risk on the point, to play long, to play a good rally. Was maybe one of the best points of the match.”
The previous Wimbledon record was 42 strokes, set in a 2006 match between Jarkko Nieminen and Dmitry Tursunov. The women’s record is 39, set in a 2007 match between Nathalie Dechy and Elena Dementieva. Rallies on grass are usually shorter than on clay or hard courts.
SECOND CHANCE
Barbora Strycova made a Wimbledon final after all — in women’s doubles.
A day after losing to Serena Williams in the singles semifinals, Strycova teamed up with Hsieh Su-wei to beat top-seeded Timea Bagos and Kristina Mladenovic 7-6 (5), 6-4 and reach her first Grand Slam final.
Strycova has 26 doubles titles in her career but lost in the semifinals twice at both the Australian Open and U.S. Open and once at the French Open. Hsieh won the 2013 Wimbledon and 2014 French Open doubles titles.
The third-seeded pair will play No. 4 Yifan Xu and Gabriela Dabrowski, who beat Barbora Krejcikova and Katerina Siniakova 6-1, 3-6, 6-3.
JUNIOR FINALS
Shintaro Mochizuki became the first Japanese player to reach a junior boys’ Grand Slam singles final after outlasting fourth-seeded American Martin Damm 6-1, 0-6, 10-8.
The eighth-seeded Mochizuki will play Carlos Gimeno Valero of Spain, who beat Harold Mayot of France 7-6 (5), 6-4. Gimeno Valero will also be playing his first Grand Slam final.
In the junior girls’ final, Alexa Noel of the United States will face Daria Snigur of Ukraine.
Noel beat Diane Parry of France 6-2, 6-1, and Snigur defeated Emma Navarro of the United States 6-3, 6-0.
___
More AP tennis coverage: https://www.apnews.com/apf-Tennis and https://twitter.com/AP_Sports