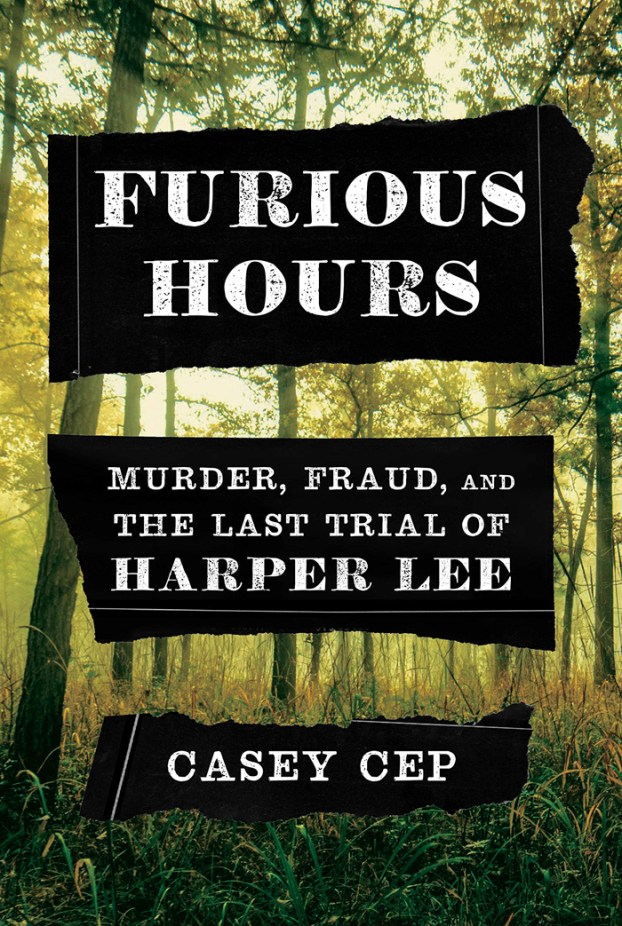 The true crime that could have been Lee’s next book

“Furious Hours” is a compelling piece of reporting on a series of murders in Alabama, the elusive Harper Lee and her attempts to write a true crime book, much as her dear friend Truman Capote did with “In Cold Blood.”

But the book was never written, given the information author Casey Cep was able to unearth from the highly private writer’s life.

The first part of Cep’s book is a whodunit true crime that had a a whole town in Alabama believing in voodoo. The middle describes the career of lawyer Tom Radney, a Democrat in the Deep South and the man who defended the suspected killer and his murderer.

The final part explores Lee’s reporting, information gathering, research and struggle to find the protagonist that would take her through the story.

Her problem — she had reams of rumors, speculation and theories. Facts were few. She had helped Capote research his book, and knew he had taken great liberties — making things up when the facts were not so interesting. She will not take that approach.

Cep opens the book with the damming of the Tallapoosa River. The Rev. Willie Maxwell, a black preacher in Alexander City, Ala., is born in the midst of that project. In 1943, at 18, he is drafted into the Army, but never leaves the United States.

He marries young, and he and his wife work as sharecroppers at first. He then works at a mill and in the pulpwood industry, preaching here and there on Sundays. He’s known for having a short fuse, but a powerful interest in evangelism.

It is after he stays late at a revival in Auburn, Ala., that his first wife, Mary Lou, is found dead in her car just down the road from their home. Before calling police, he calls her mother, her sister and his neighbor. Mary Lou is found strangled, bruises and cuts all over her body, bloodstains on her dress. The autopsy determines she was beaten to death after a failed attempt to strangle her.

The Maxwells’ neighbor, Dorcas Anderson, had damning testimony that called into question Maxwell’s alibi. The investigation finds he is in debt and has a number of “lady friends” in the area, as well as numerous insurance policies on his late wife. His trial ends in acquittal after Dorcas changes her testimony.

Dorcas Anderson’s husband dies not long after Mary Lou Maxwell. The reverend marries Dorcas, and she, too, dies in her car on a road near the house. People who are counting are up to three suspicious deaths linked to Maxwell.

Next, his brother and his nephew die along the road near Maxwell’s house. His brother, an alcoholic, is said to have died of natural causes. His nephew is found dead in his car, no cause of death ever determined.

Amazingly, Maxwell marries a third time, and welcomes his wife’s stepdaughter into their home.

By now, stories are swirling around the reverend. He can no longer preach anywhere in the county. People are afraid he’ll look at them and they’ll die. Tales of Maxwell studying voodoo in New Orleans make the rounds, and rumors of voodoo rituals at his home circulate.

Maxwell claims his first wife was murdered in his stead — that he was the intended victim, but could never describe who wanted him dead. Cep writes: “As for the other deaths, he felt he was being tested by some terrible force, perhaps human, perhaps not: ‘some enemy or another sticking around to hinder me, slipping around somewhere I haven’t seen him, but I’m asking the Lord to see and he will see.”

What Maxwell sees are continued payouts for the insurance policies he had taken out on every one of his family members who died suspiciously. A few of the companies balked, but Radney, Maxwell’s lawyer, fights back. The reverend continues to earn money from death.

When his third wife’s stepdaughter, Shirley Ann, is found dead under the reverend’s car in a field not a mile from the house that local law enforcement, the Alabama Bureau of Investigation, even Maxwell’s long-time lawyer, are certain the reverend is on a killing spree with rewards.

At Shirley Ann’s funeral, a man named Robert Burns takes care of the problem, shooting the reverend in the head three times in front of 300 witnesses.

Radney loses one client and gains another, with a trial that claims Burns was temporarily insane when he pulled the trigger.

Cep then explores the life of southern Democrat Radney, his defense of black clients, his runs for political office and his big personality. Radney was trying to turn the state blue, at a time when the red was spreading like blood over Alabama. Wallace was governor, spewing segregationist talk.

It’s into this atmosphere that Nelle Harper Lee, who grew up in Monroeville, Ala., steps, after spending a great deal of time avoiding publicity and not writing a second book.

The trail of lost lives, voodoo claims and the acquittal of Maxwell’s murderer is truth stranger than fiction.

But Lee knows the people of Alabama. Soft-spoken and careful, she begins research for what will be her own true crime book.

Radney opens his home and his files to her. A judge grants interviews. Law enforcement officers, especially the ABI agent who was sure Maxwell was behind the deaths in his family, talk to her.

Lee convinces members of Maxwell’s surviving family and neighbors to talk to her. They trusted her. Her Alabama drawl, her plain clothes and steadiness win them over.

She couldn’t pinpoint what made Maxwell the man he was, and felt she was missing an important piece of the story.

Lee found few hard facts she could rely on. She realized she couldn’t make her protagonist a man who may have killed five members of his family. Robert Burns  is also a killer.

She contemplated telling the story with Tom Radney as the protagonist, but hesitated to use his perspective as a white man and the defender of not one, but likely two, murderers.

She worked in fits and starts, if she could work at all. She drank too much, rarely left her New York apartment or ate much, sinking into a depression exacerbated by the deaths of her own family members and of Capote, her childhood friend.

Always adamant about avoiding publicity, she refused to make any appearance or talk to any journalist. She maintained correspondence with friends, including Gregory Peck, and that correspondence, now destroyed at Lee’s request, was clever, entertaining and arch.

Her trusted agent and the editor who polished the rough “Go Set a Watchman” into the gem “To Kill a Mockingbird,” died.

In the decades after the sensational Maxwell case, other authors wanted to interview her about what she had learned. More than one author wanted to write Lee’s biography.

Finally, she told one reporter he could write whatever he wanted about Maxwell. She was never going to write a book. She was relieved to have it over.

A stroke slowed Lee in March 2007; her older sister, Alice, now over 100, died. Lee’s eyesight was destroyed by macular degeneration, and she had difficulty hearing. A new literary agent took over. It was that agent who promised a new book, which was actually the old “Go Set a Watchman” from 1958, before it was ever edited and made into the book that millions of people all over the world had loved.

When Lee died, the new agent insisted there were no files from the late Tom Radney in Lee’s possession, although Big Tom had given Lee a thick briefcase full of notes about Maxwell and Burns. A year later, Lee’s estate turned over Tom Radney’s briefcase to his family, with Cep in attendance.

But the rest of Lee’s writings, if there is anything else, remains sealed in her estate.

Cep includes extensive notes and bibliography for this work of non-fiction. She’s done honest reporting, and a lot of leg work.

“Furious Hours” looks at an iconic writer, a strange series of deaths and the writing climate of the South and the era. Cep brings Lee to life with all her personality, her brilliance, her fears, her demons. But there’s no judgment, and no conclusion, much like the end of Lee’s life.

Baseball fan? The library has some new books for you

By Paul Birkhead Rowan Public Library Have you attended a baseball game lately? Now that college ball has wrapped up,... read more