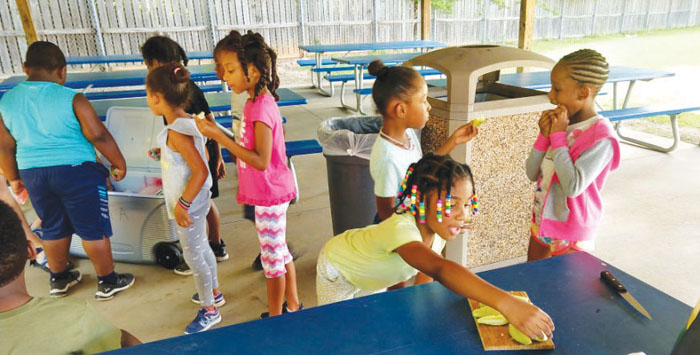 SALISBURY — Hurley Elementary School’s new garden is providing fresh veggies for students who might otherwise not have access through the Rowan County Summer Meals Program.

On Wednesday at J.F. Hurley Family YMCA, members of the Hurley staff teamed up with the Rowan County part of the meals program to provide vegetables grown in Hurley’s new school garden. The YMCA is one of 130 Summer Meals Program sites across the county, 49 of which — including J.F. Hurley’s — are open to any child under age 18. The meals program is funded through grants from the U.S. Department of Agriculture.

The idea to offer fresh produce to the Summer Meals Program came after Hurley Elementary had a surplus of vegetables from its new garden, with no students in classes to enjoy them during the summer harvest season.

Before sharing the food with the Summer Meals Program, Emily Rider, an English as a Second Language teacher at Hurley, said the school wasn’t sure what to do with the fresh produce.

Teachers thought about canning the produce for use when students come back in the fall, but Assistant Principal Tiffany Eudy suggested that children should reap the benefits of the fresh produce in season, Rider said.

So Eudy proposed that some school staff members start bringing fresh vegetables to students who need access to fresh foods the most — those in the Summer Meals Program.

Rider, who helped facilitate the garden, said the school grows a wide selection of vegetables, including tomatoes and cucumbers.

The garden also has a variety of herbs and flowers, she said. Plants were donated through a grant from Blooms of Blessings.

Rider helped create the garden with Hurley’s fifth-grade “green team,” made up of about six students.

Hurley Principal Ryan Disseler said the garden is part of the school’s broader program of becoming a green school. Hurley was recognized as a North Carolina Green School of Promise.

The goal is to try to supply the Summer Meals Program with produce on a weekly basis.

Rider said there are a lot of food deserts in Rowan County that affect Hurley students. Giving fresh vegetables to the Summer Meals Program is one way to help close the gap.

“There’s a lot of Hurley kids here,” Disseler said, adding the number appears to be increasing.