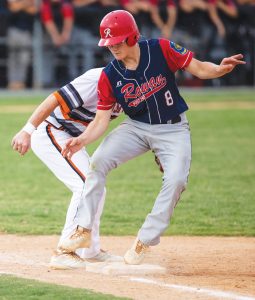 By Darrick Ignasiak
Lexington Dispatch
LEXINGTON — Davidson County Post 8 will be looking to advance to the third round of the American Legion Area III playoffs tonight, after losing in extra innings to Rowan County, 8-3, Thursday night at Holt-Moffitt Field.
Rowan had a five-run inning in the top of the ninth, snapping a 3-3 deadlock. The victory forces Game 4 tonight (7:00) at Newman Park. Post 8 leads the best-of-five series 2-1.
“I thought we swung it well,” said WarHawgs acting coach Keaton Hawks. “(Rowan County) had some opportunities and executed. It’s a great ball team over there. We have to refocus, come out again (Friday) and  be ready to play.”
Davidson catcher Jake Brown made a nice play behind the plate for the game’s first out. As Rowan’s Jordan Goodine tried to steal second base, Brown threw out the runner. WarHawg pitcher Brannon Williamson followed the first out with a strikeout of his own.
Post 8’s Carson Simpson tripled in the bottom of the first inning. An RBI-double from Zack Cates scored Simpson, giving the WarHawgs an early 1-0 lead.
In the second inning, Nathan Burton made a nice diving catch  in right field and Williamson also got his second strikeout during the frame.
In the third inning, Rowan scored two runs to take a 2-1 lead on a two-run double from Cole Hales. Williamson struggled as he hit two batters and walked another. However, the Post 8 pitcher was able to finish out the inning with a pop fly going into the bottom of the inning.
An RBI-single from Cates tied the game at 2-2 in the bottom of the third inning and Davidson regained the lead in the fourth inning. Burton reached home plate off of a throwing error from Rowan third baseman Bryson Wagner. Post 8 led, 3-2, going into the fifth inning.
A Rowan home run from Luke Barringer, his ninth of the season, tied the game again — at 3-3 — in the sixth inning.
In the seventh, Williamson struggled again, hitting two batters. However, he managed to get out of the seventh inning with a pop fly and no runs scoring.
Williamson exited the game in the top of the eighth. Drew Wright, who is the prospective starter for Friday, came on in relief. Wright was replaced by Andrew Cook on the mound in the top of the ninth.
Rowan loaded the bases the ninth, and Hales’ two-run single put the visitors on top, 5-3. Barringer walked with the bases loaded for another run and then, Bo Rusher finished off the big rally with a two-run hit, making it 8-3.
Hales had the game’s two big hits, good for four RBI. Obviously, Barringer’s homer was huge as well.
“We just got to come out swinging again (Friday),” said Simpson, who ended his night Thursday with three hits.
The WarHawgs overall record now stands at 16-8. Rowan improves to 23-12.