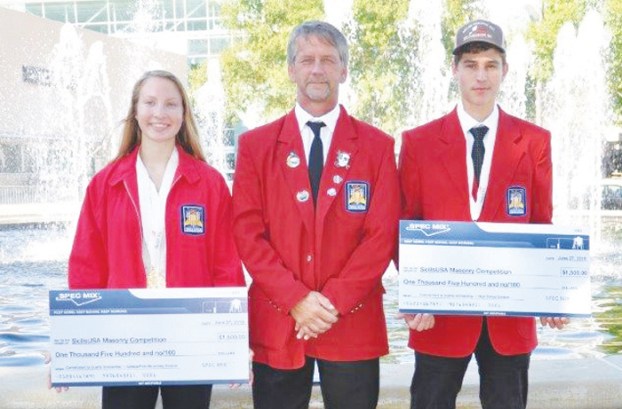 A recent trip to Louisville, Kentucky, alongside two students is fresh on the mind of West Rowan High School masonry teacher Rodney Harrington.

Their destination? The SkillsUSA Championships, a national competition for career and technical education students.

With Harrington were rising senior Grant Helms, Rowan-Cabarrus Community College student Ashton White and their families. The pair competed in secondary and postsecondary masonry, respectively, and each claimed first place.

“To be able to take two students and both reach the top level, the gold level at a national competition, that was pretty breathtaking,” Harrington said. “It will bring a tear to your eye, that’s for certain.”

For Helms, the win is No. 4 out of five state and national competitions in which he has participated. In October, he claimed the top slot among a crop of adult apprentices at the North Carolina State Fair’s 65th annual Apprentice Masonry Contest. In April, he placed first at the SkillsUSA North Carolina competition with a perfect score.

The perfect score — earned through a timed bricklaying project scored on appearance, measurements, level, plumb, square and straight-edge — was also a first in the competition’s history, Harrington said.

As reasons for their history-making, Harrington pointed to Helms’ and White’s love and enjoyment of masonry.

“In this particular case, I think they’re both super-competitive,” said Harrington, “They’re both going to be in this field. This is what they want to do, and I just think that it’s the drive behind both of these students that has helped them know hard work will result in something like this.”

Helms also credited the hard work — along with family mentors such as his father and uncle and teacher Harrington — as the largest contributors to his win.

Harrington was there along the way, helping him practice for the competition’s written skills portion — a test of knowledge of masonry concepts, terms and tools, Helms said.

And Harrington also helped both contestants prepare for the hands-on construction test that followed. Masonry students were given six working hours to complete a structure, with a chance to preview and plan for the effort a day before.

“Usually when we do projects, they’re things that have already been drawn, that we’ve done before at competitions years prior,” Harrington explained. “This was a brand-new project, a challenging project.”

So challenging, Harrington said, that only two college-level competitors completed their structures, and roughly 10 of 30 high school students finished theirs.

Harrington said he has attended masonry competitions so often that he’s fairly confident in his ability to identify winning projects. Seeing White and Helms at work, he saw great things ahead.

But, he said, “there’s always that question.”

That question would be answered positively the following day, as the winners were named at an awards ceremony.

“They called out the top three in each contest, and when they got to second place, I was just worried sick,” said Helms.

Then he heard his name.

“I was just pretty excited,” Helms said. “There’s no other feeling like that, being called out on stage.”

So many things were happening Tuesday morning (July 2). I needed to check my messages and also needed to submit... read more