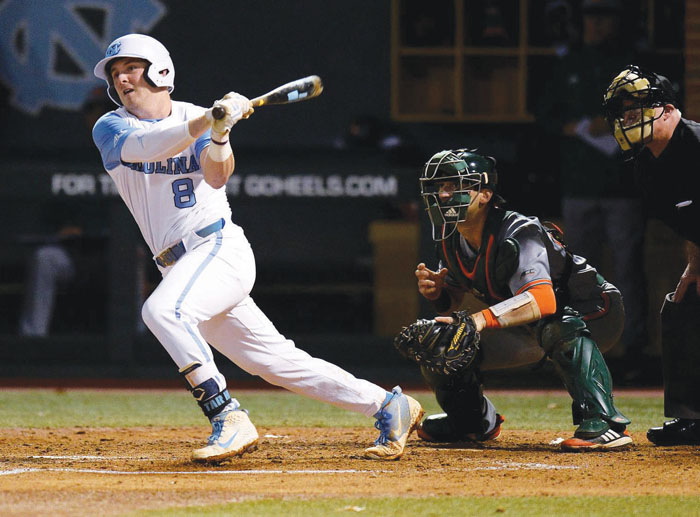 But Isaac Dale “Ike” Freeman, regular third baseman for the Cleveland Indians Blue team in the Arizona Rookie League, isn’t one to complain about the weather.

“Sure, it’s hot, but my job is baseball and I’m getting to play baseball for a living,” the former East Rowan High and UNC star said, in a phone interview. “Really, that’s about all you can ask for. I don’t care what the temperature is.  I love going to the park every day.”

Freeman’s love affair with baseball will be tested, at times. Baseball is a game of failure. Those who can go 3-for-10 at the plate become household names and earn millions.

Every pitcher Freeman faces now is someone who was signed to a contract and is getting paid to throw baseballs. There aren’t many hurlers who fling fastballs slower than 90 mph. The breaking balls break sharper and break later. The changes of speed are more deceptive.

Monday was an humbling experience, a harsh lesson in mental toughness for Freeman. He was 0-for-4, with three strikeouts.

“The pitching is tough here, although it’s not that much tougher than what I’ve seen in the ACC,” Freeman said. “The huge adjustment is swinging a wood bat. After 15 years of metal bats, it takes some getting used to wood. Wood still doesn’t feel quite right in my hands. Not yet.”

Freeman was a terrific high school player for East coach Brian Hightower from 2013-16. An injury cut Freeman’s freshman year short, but in his three healthy seasons, he batted .330, .372 and .518, while amassing 120 career hits and driving in 74 runs. As a senior, he was the Mark Norris Memorial Award winner as Rowan County’s Player of the Year. He was the South Piedmont Conference Player of the Year and All-State. He was the first East player to bat .500 since 1999.

Freeman shined for a stellar South Charlotte Panthers showcase team as well as East. Numerous colleges recruited him. He signed with UNC, his dream school and his No. 1 choice all along.

When Freeman headed to Chapel Hill, there were few questions about his bat, but there was some concern about his defensive consistency.

What occurred in 2017 was the opposite of what was anticipated. As a UNC freshman, Freeman’s glove work proved exceptional, mostly at second base, but he struggled at the plate, batting .174.

He wasn’t considered a serious contender for a regular job as a sophomore, but he waded through a deep pool of candidates to become the starting shortstop. He took opportunity and ran with it. He produced a breakout season, starting 63 of 64 games and batting .305 with 51 RBIs. He was voted third team All-ACC and was voted to UNC’s Most Valuable Position Player award.

He batted .457 in the 2018 postseason, including a 3-for-4 effort against Oregon State in the College World Series. That postseason success stamped him as a potential future draft pick and he didn’t hurt himself with a competent showing against elite competition in the summer of 2018 in the Cape Cod Baseball League. Swinging wood, he belted three homers in the CCBL.

As a junior, the stocky, 5-foot-10 Freeman turned in a season similar to his sophomore numbers. He batted .293 with six homers and 52 RBIs. Fifty-one walks (with only 32 strikeouts) and a team-high 11 HBPs gave him a lofty on-base percentage of .436. The biggest change for Freeman as a junior was defensively. With the emergence of freshman Danny Serretti at shortstop, Freeman became UNC’s third baseman.

“I’d never really played third, but I got used to it,” Freeman said. “I like it. I could still move over to shortstop or to second base if needed, but third base is a position that suits me well.”

The 2019 MLB draft began on June 3, one day after UNC beat Tennessee to win a regional.

Freeman was drafted by the Indians on Day 3, June 5, in the 14th round, player No. 430.  That was three days before the Tar Heels started Super Regional play in Chapel Hill against Auburn.

So there was a lot going on.

“Well, the draft was a nerve-wracking three days,” Freeman said. “I was just glad when that call came. It doesn’t even matter what team it is. When that call comes, it’s one of the best feelings you can ever have.”

UNC’s season ended with a loss to Auburn on June 10, and Freeman, who turned 21 years old a week after that loss, turned his attention to getting signed and getting his pro career started.

He was one of the last Cleveland draft picks to sign, but he says that wasn’t by design.

“After we lost in the Super Regional, I packed everything up and went home for a little bit,” Freeman said. “Then I had to re-pack everything before I flew back out. I never had any intention of not signing with Cleveland, but it just took some time to get everything done.”

He received a substantial signing bonus for a 14th-rounder — $125,000. Juniors have some negotiating power because they can go back to school. A senior picked on the 14th round might be lucky to get $10,000. For drafted seniors, it’s play ball or find a job. That’s why the overwhelming majority of juniors who are drafted choose to sign.

Freeman has taken a conservative approach to his bonus. He has no plans for major purchases.

“I’ll put most of it in the bank, maybe invest in stocks,” Freeman said.

Freeman made his professional debut for Cleveland Blue — there’s also a Cleveland Red — on June 20. He struck out swinging on his first at-bat, but on his third trip to the plate in the fifth inning, he socked a run-scoring double.

He’s had three multiple hits game so far, including a 3-for-3 effort on June 27. He was batting .280 heading into Monday’s game, but that rough outing dropped him to .259.

“One of the differences with a wood bat is that you don’t get those jam-shot hits that fall over the infield,” Freeman said. “When you get jammed swinging wood, it’s just a broken bat.”

There are a lot of reasons why it’s tougher to get hits in pro ball. It’s not just the pitching and the wood bats. The defenders are pros for a reason. They have plenty of range and strong arms.

Cleveland doesn’t have an advanced rookie club, so the next step up the minor league ladder for Freeman would be the short-season Class A team, the Ohio-based Mahoning Valley Scrappers.

The Scrappers play an hour or so away from Cleveland and in temperatures 20 degrees cooler than Arizona.

“The goal is always to move up, but the Indians have kept the college guys they drafted here together in Arizona,” Freeman said. “If I’m here all summer, that will be fine.”

Freeman plays home games at 8,000-seat Goodyear Ballpark. The fast-growing city of Goodyear, located in the Phoenix area, is the shared base for both of the MLB Ohio teams, the Indians and the Cincinnati Reds. The city of Goodyear is named for the Ohio-based Goodyear Tire and Rubber Company, so it all makes sense.

Freeman, who has three doubles and nine RBIs in 58 at-bats, struggled Monday, but the great thing about baseball is you play almost every day. Each day brings new hope and new possibilities. Today might be the day Freeman  hits his first pro home run.

“I’m loving every day of baseball,” Freeman said. “Every day is fun.”