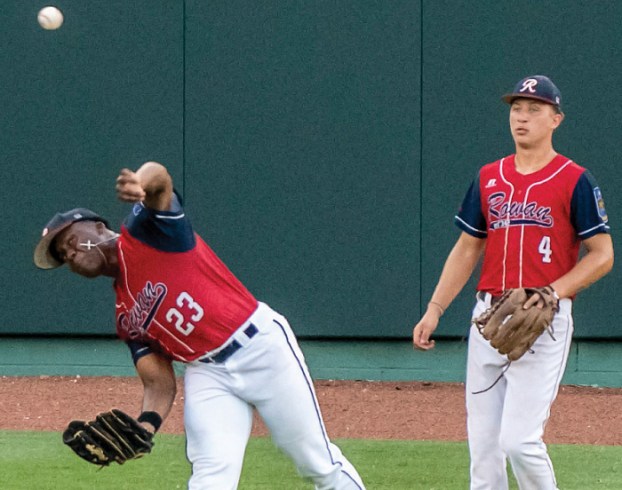 BERNADINE HERNANDEZ/SALISBURY POST ... Rowan County's Jordan Goodine (left) throws the ball in from the outfield as Wayne Mize looks on during the game with Davidson County at Newman Park in Salisbury, N.C. 7/10/19 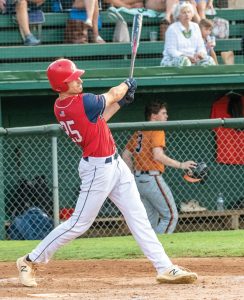 SALISBURY — Nothing quite says “mediocre” like the Rowan County pitching staff.

More evidence was submitted Wednesday night at Newman Park, where Davidson County put 20 runners on base against seven Rowan hurlers in a 9-6 victory, helping Post 8 take a two-games-to-none lead in this best-of-five Area III quarterfinal series. Game 3 is scheduled for 7 p.m. today at Lexington’s Holt-Moffett Field.

Rowan (22-12) collected eight extra-base hits against three Davidson (16-7) pitchers — including towering home runs by Luke Barringer and Chandler Lippard. But the guests rallied from a 6-4 deficit and held Rowan scoreless over the game’s final four innings to move to within one victory of advancing.

Right-hander Deacon Wike started on the mound for Rowan, but didn’t survive the third inning. He was charged with four runs allowed — only one was earned — and walked three in 2 2/3 innings. Losing pitcher Bryson Wagner relieved in the fourth and yielded Carson Simpson’s two-run homer that tied the score at 6-6. Jake Brown put Davidson ahead when he grounded a single into left field, advanced to second on a groundout and crossed on successive wild pitches.

Facing Scout Nichols an inning later, Davidson padded its lead to 8-6 when Nathan Burton scored on Landon Hillburn’s two-out single up the middle. No. 9 hitter Drew Wright scored Post 8’s final run in the seventh frame against lefty Jordan Goodine — on Brown’s two-out, Baltimore-chop infield hit to the left side.

Goodine had a pair of doubles and Barringer contributed his eighth home run of the season and a seventh-inning double off the wall in left field. But he and teammate Bo Rusher were stranded in scoring position when Brown — Davidson’s third pitcher —  fanned Steven Smith and induced Zeb Burns into a game-ending groundout.

So now, it’s third-and-long for Rowan, a team that won 12 of its first 15 games and seemed destined for a deep post-season-run. Instead, it’s season is circling the drain, thanks to a pitching staff that issued eight walks, surrendered 11 hits, uncorked four wild pitches and even balked in a run, losing for the fifth time in the last eight games.

NOTES: Rowan is likely to start southpaw Daniel Durham (3-0) tonight. Game 4, if necessary, will be played Friday night at Newman Park. … The game took three hours and two minutes to complete. … Rowan had seven extra-base hits in the first three innings, then only a fourth-inning single by Hales and Barringer’s seventh-inning double the rest of the way.

By Ben Walker AP Baseball Writer CLEVELAND (AP) — The only errors on the scoreboard at the All-Star Game were... read more