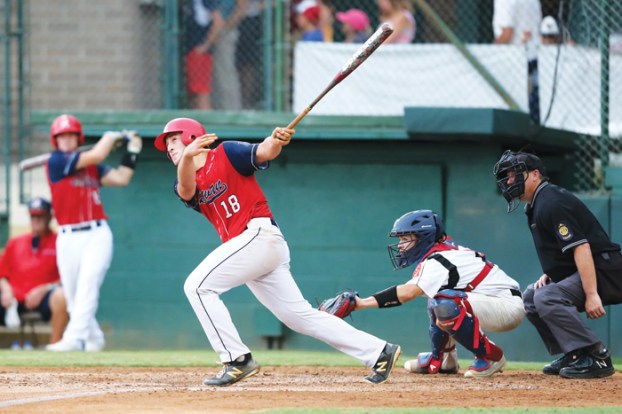 JAMES SIPES file photo/for the Salisbury Post ... Rowan’s Chandler Lippard, shown during a game last year, had a bases-loaded walk to drive in a run on Tuesday night against Davidson County in Lexington. Davidson won, 5-4, but Rowan can even the American Legion playoff series at home tonight.

LEXINGTON — With an electric crowd hanging on every pitch, Davidson County got every pitch it needed.

Post 8 jumped out to a 5-1 lead, then held off three major scares to notch a 5-4 victory over Rowan County Post 342 in Game 1 of the American Legion Area III quarterfinal matchup at Holt-Moffitt Field on Tuesday night.

Game 2 will be at Newman Park tonight at 7 o’clock.

With runners on second and third and two out, pinch runner C.P. Pyle tried to steal third. But Noah Coleman – who moved to catcher when Jake Brown came to the mound to close things out – fired to Drew Wright at third base, nailing Pyle and end the game.

Davidson coach Keaton Hawks was thrilled to survive a Game 1 that was in doubt until the final out. “That’s how it’s been the last couple games for us,” Hawks said. “They were right there in it. Their guys competed the whole game.

“But things just turned our way,” continued Hawks. “(We) had great pitching on the mound, great defense. It all worked out.”

Rowan, the No. 3 seed from the Area III South Division, looked to establish itself in the early going. Cole Hales led off the game with a single, moved to third on Wayne Mize’s double and scored when Luke Barringer lifted a sacrifice fly to center.

But Post 8 responded in a big way in the bottom of the second. Taylor Stewart led off the inning with a booming double off the fence in center field. Coleman reached on a bunt single, then Nathan Burton stayed red hot with an RBI-single to left. Wright’s sacrifice bunt put runners on second and third, and Jackson McAllister delivered a sacrifice fly to center to give Post 8 a 2-1 edge. Landon Hilbourn followed with a crisp opposite-field single to score another run and, following Carson Simpson’s walk, Brown dumped a flare into shallow right field to drive in Hilbourn. Zack Cates’ single off Rowan pitcher Michael Molenda’s glove allowed Simpson to race home, making it 5-1.

It was about as much of a nightmare scenario as Rowan coach Jim Gantt could have dreamed up. “Crazy thing, we had one batter 0-2 and gave up a sac fly,” Gantt recalled. “Then we had a play up the middle that our pitcher knocked down. If he had known where the shortstop was playing, the inning was over. You’re trying to make a play, I get it. But that was crucial.”

WarHawgs starter Jonathan Conway set the cruise control over the next two innings, but hit a major detour in the fifth. Conway walked the bases loaded with one out, then walked Chandler Lippard to force in a run. He bore down to catch Barringer looking on a full-count fastball on the outside corner for the second out, then induced a fly ball from Durham to work his way out of the jam.

That missed opportunity was the subject of a long lecture from Gantt in the visitors’ dugout after the game. “One base hit,” Gantt lamented. “The guy had walked four in a row, walked in a run. It’s hard to start swinging, because sometimes that’s all you have to do is put a ball in play.

“You know, you can chart BP and you’re gonna hit .500,” Gantt continued. “In a tight situation, in a game, runners on, you’re wanting to do well. But they made enough pitches and enough plays to keep them out of that big inning.”

Davidson’s best threat to add to the lead came in the bottom of the fifth, when Burton and Jackson McAllister singled to put runners on the corners with one out. Burton broke for home on Landon Hilbourn’s squeeze attempt, but Hilbourn couldn’t get a bat on the outside pitch and Burton was tagged out.

Brown got out of the jam in the seventh, thanks to Coleman gunning down Pyle for the game-ender.

Burton finished with three hits for Post 8, the No. 2 seed from the Area III North Division. Hales had two hits for Rowan.

By Mike London mike.london@salisburypost.com SALISBURY — Healthier and more confident than it was a week ago, Rowan County’s American Legion... read more