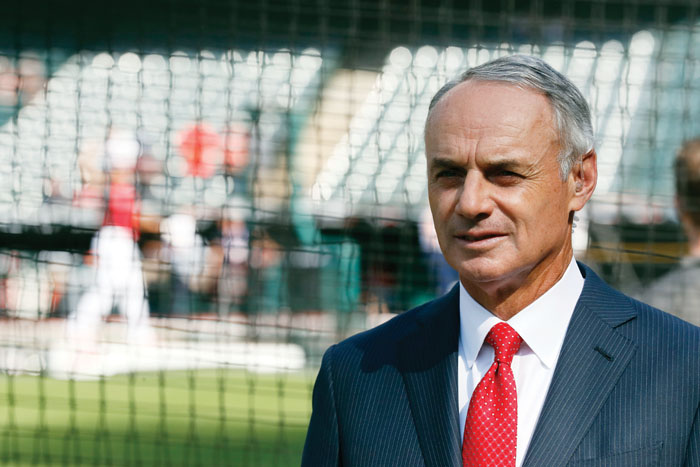 CLEVELAND (AP) — Faced with a record onslaught of home runs that has convinced many pitchers that baseballs are juiced, Commissioner Rob Manfred says the sport has been unable to find any changes in the manufacturing process.

A May 2018 report to Major League Baseball by professors specializing in physics, mechanical engineering, statistics and mathematics concluded there was less drag on the ball, causing more home runs. MLB still has not figured out why, and Manfred denied accusations by AL All-Star starter Justin Verlander and other pitchers that baseballs deliberately had been altered.

“Baseball has done nothing, given no direction for an alteration in the baseball,” Manfred told the Baseball Writers’ Association of America on Tuesday. “The biggest flaw in that logic is that baseball somehow wants more home runs. If you sat in an owner’s meeting and listened to people talk about the way our game is being played, that is not the sentiment among the owners for whom I work. There is no desire on the part of ownership to increase the number of home runs in the game. To the contrary, they’re concerned about how many we have.”

“Pitchers have raised issues about particularly the tackiness and the seams on the baseball, and we do believe that those could be issues that are related to the performance of the ball and we’re trying to get our hands around,” Manfred said.

He firmly rejected claims that MLB changed the ball to spark offense.

“Manipulation of the baseball is a great conspiracy theory,” Manfred said. “How you manipulate a human-dominated handmade manufacturing process in any consistent way, it’s a smarter human being than I.”

Union head Tony Clark, a former All-Star first baseman, said some of his members have sent balls to the players’ association office.

“The ball suddenly changed and I don’t know why,” Clark said. “With something that seems to have changed as dramatically as it has, where does that put guys? How were those statistics represented? How did they manifest themselves in an overarching conversation so that you can compare yourself with somebody?”

The balls have become baseball’s hot topic, especially among players who handle them the most.

“I had a game recently where I threw a ball out, it didn’t feel right,” he said. “The umpire threw me a new one, I threw that out. We went through several of them. And it wasn’t like the umpire was rushing me. We were on the same page. He was like, ‘Yeah, I know these feel weird.’”

Clark and Verlander have questioned whether MLB has more input into the ball since Rawlings Sporting Goods Co. Inc., its manufacturer, was purchased last year by Seidler Equity Partners. Peter Seidler, the San Diego Padres general partner, has chief oversight of all activities of Seidler Equity Partners. In addition, Manfred said MLB acquired a minority stake in Rawlings as part of the purchase.

“That dynamic changes the perception and it changes the direct input that can be offered with respect to that piece of equipment, and it just happens to be one of the most important,” Clark said.

Manfred said the optics were not an issue because MLB had been transparent in hiring outside scientists to investigate.

“I see that as a positive,” he said of the purchase. “If we didn’t have some control over the company that produces our baseballs and something happens to that company, we would be in a very difficult position.”

Rawlings manufactures major league baseballs in Costa Rica, and then stores them in Washington, Missouri, at 70 degrees and 50 percent humidity. All teams store their balls at about 70 degrees, and Arizona and Colorado use humidors that maintain humidity at 50 percent.

MLB has commissioned laser tests to measure seam width and height. Manfred said that if causes of the decreased drag are found, it is possible the ball’s specifications could be changed to decrease homers.

“We just haven’t made a decision on that,” he said. “Changing the baseball is a mechanism by which you could manage the way the game is being played. We haven’t missed that idea. But if we were going to do it, we would do it in a way that was transparent to the media and the fans in advance.”