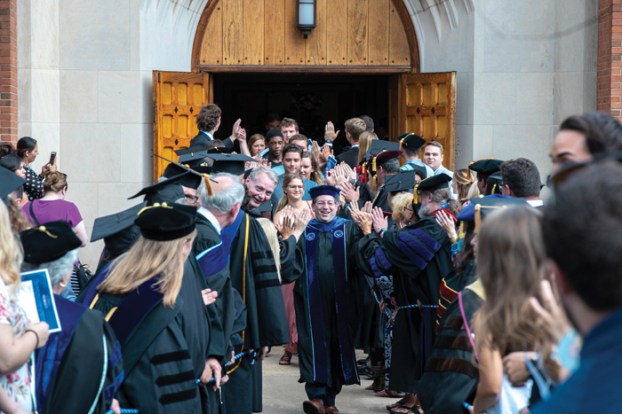 SALISBURY — Catawba College President Brien Lewis on Monday had time for but a few words about the morning announcement that he would leave Catawba at the close of the 2019-20 school year.

The decision to not seek a renewal in his 2020-expiring contract was entirely his own, Lewis said.

“The decision was not related to recent budget adjustments,” he said.

In an announcement to the campus community Monday, Lewis said he advised the board of trustees he would not seek a renewal of his contract. His announcement follows recent community concern about cuts to the college’s personnel and budget that eliminated positions across some administrative and academic departments.

Bill Graham, chairman of Catawba’s board of trustees, said, “There seems to be some conflation of the cuts that have occurred.”

Graham reiterated an explanation given by Lewis in late June in an interview with the Salisbury Post: the personnel reductions are not the result of compounding debt. Instead, they were decisions to fine-tune or redirect the school’s focus toward areas of growing student interest, including the nursing program and upcoming online-oriented programs.

The school’s nursing board was already seeing 100% passage rates, and 96 percent of Catawba graduates were either employed or in graduate school, Graham said.

“There’s been a lot of positive things happening,” he said. “Any increase of the school’s debt is nonexistent.”

Graham said Lewis’ decision not to seek a contract renewal was unrelated to the shift in focus, adding that the restructuring had been mandated by the board of trustees.

“We’re the ones that told him to reposition and begin about it in an expeditious way,” he said, repeating accolades contained in a news release about Lewis’ decision. During Lewis’ tenure, the college has reduced its debt and reliance on annual unrestricted gifts and “substantially upped fundraising,” Graham said.

A news release sent Monday said that in the past seven years, the school had received $73 million through “The Forward Path” fundraising campaign and $28 million through its ongoing “Mind Body Soul” campaign. The release also said the school’s endowment had grown from from $39.5 million to $68.3 million during that time.

“Brien is going to have a successful career in his next endeavor,” said Graham.

What this endeavor will be remains to be seen, as Lewis said Monday afternoon he is exploring other opportunities. In his morning announcement, Lewis said his early word to the board of trustees was offered in an effort to provide sufficient time for a full national search for a successor for the 2020-21 academic year.

“We have enjoyed our time here tremendously and feel that the college has made a lot of progress,” Lewis said. “Our children are now both in college, so we would not be uprooting them, also making it a good time to consider a move.”

Graham said the college is in a good position to surmount the shift in leadership.

The ideal candidate, he said, will be someone with the energy and experience to continue the school on its same trajectory in — once more — “an expeditious manner.”

In his message to the Catawba community, Lewis offered his thanks for what he called its “warm encouragement, advice and collaboration.”

“You have made it possible for us to help move Catawba forward and to tell the college’s story,” Lewis said. “The college’s leadership team, together with outstanding and deeply committed faculty and staff, will continue to provide great progress into the future.”

BEAR POPLAR — When you think about it, the Community Barn Quilt Mural is just what a quilt should be... read more