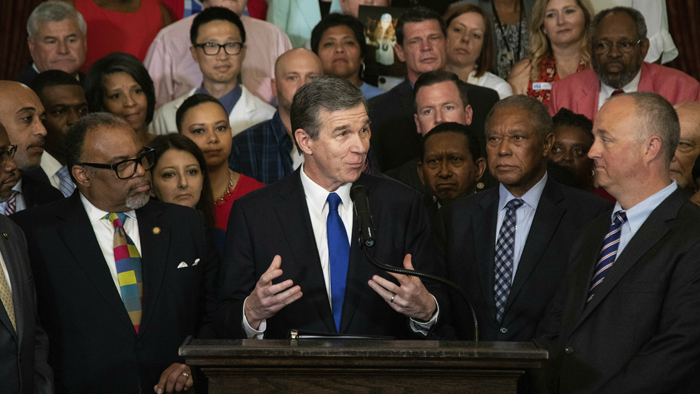 Since Gov. Roy Cooper vetoed the state budget on June 28, there has been little progress made between the hime and the Republican-led General Assembly on their differences in spending priorities.

On Monday, the budget was reintroduced in the House and scheduled for a vote, but that was put off. The Associated Press reported Tuesday that Cooper has asked House and Senate leaders to meet with him today to discuss a counteroffer. Democrats were expected to have enough votes to uphold Cooper’s veto.

Local legislators voted in favor of the original budget as Rowan County was included for multiple project funding, including $2.25 million for the N.C. Transportation Museum, $50,000 for downtown Salisbury’s Bell Tower Green park and $300,000 for Rowan-Salisbury Schools renewal initiative.

Rep. Harry Warren, R-76, said the county lucked out with the budget. Sen. Carl Ford, R-33, said he doesn’t expect the projects to be affected by the negotiations.

Cooper’s reason for vetoing the budget was that it did not expand Medicaid and that there should be more investment in public schools, teacher pay and health care, not more tax breaks for corporations.

Warren says Medicaid should be discussed outside the budget.

“When Thom was speaker of the House, we worked together to pass a transformative conservative agenda in the General Assembly, including historic tax and regulatory reform,” Berger said. “As North Carolina’s senator, Thom has been instrumental in providing more tax relief for hardworking North Carolinians and confirming well-qualified judges who follow the Constitution. Thom has a proven record of achieving results, which is why I’m happily supporting his re-election.”

N.C. Sen. Jim Perry, R-7, was the primary sponsor and received almost unanimous support in the House and Senate.

“The surcharge was really impacting nontraditional students who were making attempts to improve their personal productivity,” Perry said. “We don’t need to place additional barriers in front of people who are working to better their lives.”

“I was a community college transfer student and the first in my family to graduate from college,” Perry said. “My mother did not have the money to help pay my tuition, much less a 50% increase. My grants, loans and GI Bill were all stretched thin.

“If I had faced a 50% surcharge, I would never have earned degrees from NCSU and UNC.  There are a lot of folks in North Carolina with similar stories.”

The bill will apply beginning with the 2019-20 academic year.

Other bills that were recently signed into law include:

• Teacher contract changes: House Bill 924 clarifies the length a teacher has to work for a local board of education to be eligible for an extended-employment contract. To be considered employed for a year, a teacher must work a minimum of 120 workdays as a full-time, permanent teacher. The bill also sets up a full-credit course focused on economics and personal finance, which students have to take to graduate. The requirements begins for students entering ninth grade in 2020-21 school year.

“I commend the North Carolina General Assembly for passing legislation and the governor for signing into law standards and policies that will ensure future students, prior to graduating high school, will be more financially literate and economically sound in their decision making as adults,” Lt. Gov. Dan Forest said.