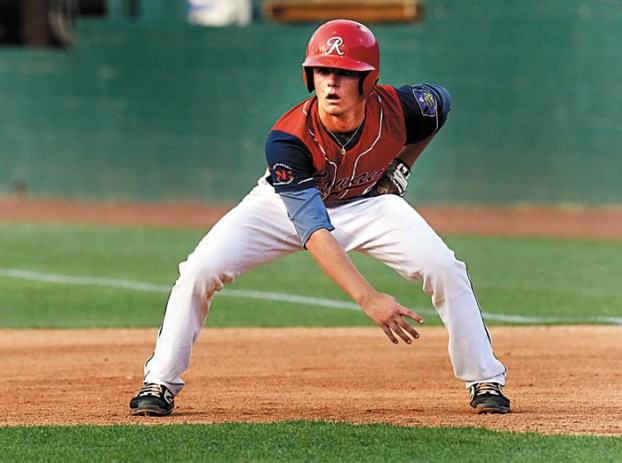 Wayne HInshaw file photo/for the Salisbury Post ... Rowan American Legion team’s JT Fecteau is shown leading off first base, during an earlier game this season. Fecteau and his teammates begin a playoff series tonight in Lexington, against Davidson County.

SALISBURY — Healthier and more confident than it was a week ago, Rowan County’s American Legion baseball team opens a second-round series tonight at 7 o’clock, on the road at Holt-Moffitt Field in Lexington.

Rowan (22-10) is on the road for Game 1 because it finished third in the Southern Division of Area III. Davidson County (14-7) placed second behind Randolph County in the Northern Division.

Game 2 of the best-of-five series is scheduled for Wednesday at 7 p.m. at Newman Park.

Holt-Moffitt Field is an old minor league ballpark, although not as old as Newman Park. It sits a block off South Main Street in Lexington. Construction on Holt-Moffitt was completed in 1938. The distinguishing characteristic of the field is a daunting, sloping bank that rises in front of the left-field fence.

Post 8 coach Dan Tricarico hasn’t been around as long as Holt-Moffitt Field, but he’s seasoned. Tricarico was East Davidson High’s coach for 31 seasons and 497 victories before retiring from that job five years ago. He piloted a lot of tough East Davidson squads against North Rowan and Salisbury in Central Carolina Conference games, with the most memorable matchups being North Rowan-East Davidson struggles in 1999-2000 when both were among the state’s best 2A teams. In 1999, North Rowan (with Daniel Moore) won the CCC, but East Davidson won the 2A state title.

Davidson County has benefited from experienced players who graduated from high school in 2018. The top-of-the-lineup guys — East Davidson’s Landon Hilbourn and North Davidson’s Carson Simpson  — are 2018 grads. Simpson was good enough to start 12 games for Wingate in the spring as a freshman. Zack Cates, another 2018 graduate from North Davidson, usually swings in the middle of the Post 8 batting order.

Davidson County suffered a three-game losing streak in late June, but turned things around and finished the regular season with three straight wins, including victories over third-place High Point and first-place Randolph County. That win over Randolph in the finale was equivalent to winning a series because it gave Davidson County a first-round bye.

Post 8 has swatted only a handful of homers this season, but it has a solid lineup that produces plenty of doubles and triples.

Tricarico has a sturdy pitching staff led by Jonathan Conway.  Conway (5-1) is a 2019 North Davidson graduate who signed with Pfeiffer. Tyler Smith, who was stuck behind big-time arms at Ledford, is getting a chance this summer and is 3-0. Drew Wright (3-2) was the ace for several years for West Davidson.

Other hurlers who have had their moments for Post 8 are Brandon Warlick (2-3), Andruw Cook (1-0) and Jake Brown (3 saves). Brown, a recent North Davidson graduate, handles the unique role of catcher/closer for the Warhawgs.

Davidson County was idle from June 4-15, which explains why it only has played 21 games. Even with a flurry of rainouts, Rowan has played 32.

Rowan got strong starts in that series from right-hander Deacon Wike (4-1) and left-hander Daniel Durham (3-0). Both are Catawba signees and both have dependable. They’ve been a steady 1-2 punch because they don’t walk people. Wike has 35 strikeouts and seven walks. Durham has 27 strikeouts and four walks. Wike’s ERA is 2.65, while Durham checks in at 3.23. It will be a surprise if they don’t start the first two games of the series.

Scout Nichols (3-1) and Michael Molenda (2-2) have been effective out of the bullpen.

The plan all along has been for Hales, the Rowan County Pitcher of the Year, to get an extended break from pitching after a heavy high school workload for Carson. He’s obviously Rowan’s best closing option, but it’s likely he’ll start on the mound for the first time this summer in this series. If the Greensboro series had gone to a third game, Hales was penciled in to start it.

Rowan’s lineup got a boost in the Greensboro series from the return of slugger Chandler Lippard (hamstring) and shortstop Zeb Burns (hand). Lippard has hit .379 in limited at-bats and gives Rowan another power threat in the middle of the lineup. Burns is only batting .260, but he puts the ball in play. He’s a good No. 8 or No. 9 hitter.

Young catcher JT Fecteau will get some work in this series when Rowan rests Rusher as the DH or third baseman. Besides his mound duties, Wagner is likely to see some infield action.

While Rowan lost 10 regular-season games and tied for third place in a six-team division, it’s probably a better team than people realize.

Rowan didn’t have the Carson players — Hales, Barringer, Wike, Burns and Pyle — until the ninth game of the season, so it’s taken a little time for this team to get to where it wants to be.

Rowan’s most recent playoff meeting with Davidson County was in 2016 when Rowan swept a best-of-five, second-round series with 6-4, 5-1 and 11-8 victories.

High school: Male athletes of the year Burton and Bennett