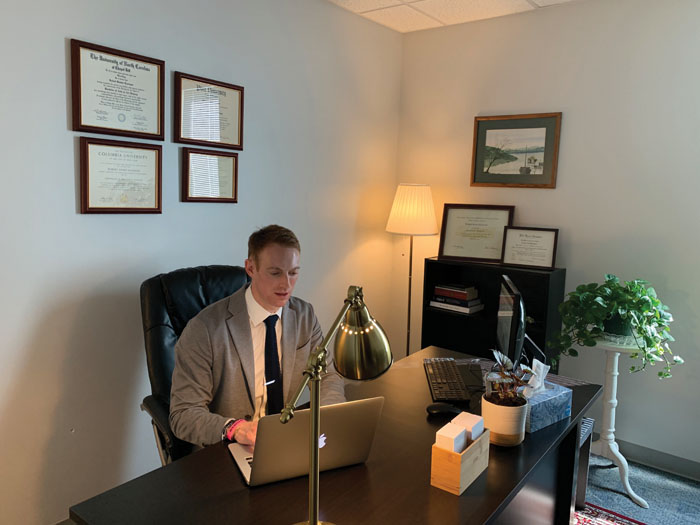 Basinger prepares for his first patient of the day

After 14 years of living in New York City, Robert Basinger found himself longing for home.

In February, in the midst of a deep depression, he came home to visit his parents, Dale and Margaret Basinger of Rockwell.

“We are ready for you to come home,” they told him.

It was a huge relief for Basinger, who has grappled with depression at various times over the last 13 years.

“It is perfect,” he says of his new role.

In 2007, Dr. Jonathan Stoudemire founded the Center for Emotional Health because he felt there was a lack of mental health care providers in the area.

The Salisbury office is one of 15 area locations. A location in Statesville is opening soon. Altogether, Stoudemire says, the Center for Emotional Health serves 45,000 patients.

“I want to make it as convenient as possible for our patients,” he says. “We even offer telemedicine in which patients can have appointments from home.”

“He’s a good fit,” Stoudemire says. “He’s very pleasant and very intelligent. He has excellent communications skills. He is very knowledgeable. What he doesn’t know, he’ll find out. He’s been a great addition to the team.”

In Salisbury, Basinger works with a team of three therapists. He assesses and evaluates patients, and when appropriate, prescribes medication. Stoudemire is his supervising physician.

“Based on my life experiences and family experiences, it’s a natural fit,” Basinger says. “I care deeply about patients. I want to provide the mental health care they need, and I will do whatever it takes to facilitate that.”

Basinger’s path back to Salisbury began in 2004, when he started work at the Metropolitan Museum of Art. The museum had recently completed a multimillion renovation. “I came on board in the events department when it was exploding.”

As a Morehead Scholar, Basinger was an art major at the University of North Carolina, where he was also named a member of Phi Beta Kappa. He served as assistant to the director of special events for one years, and as an event coordinator for a year.

But being an event planner, he says, wasn’t really his mission in life, and there were no other openings at the museum which interested him. So he thought about what he might want to do next. Since his parents had been teachers, he decided to apply to the New York City Teaching Fellows Program, a program that’s similar to Teach for America.

He was accepted into special education in an elementary school, and taught adaptive PE and yoga at PS 369 in downtown Brooklyn for the next four years, earning a master’s from Pace University as one of the perks of the program.

At 29, he found himself wanting to return to school. He chose dermatology because he wanted a more sustainable income in the outrageously expensive city in which he lived.

He was accepted to Columbia University’s pre-med program, a two-year certification he calls “the most rigorous program I’ve ever done. It was an ultra-competitive, cutthroat program.”

He did not get into medical school, but had spent a year working at a dermatologist’s office. After discussions with his co-workers, the physicians in the practice, and his parents, he realized that a physician assistant program would be a much better fit for him.

He entered physician assistant school in 2015 and graduated three years later, returning to work for the same dermatology practice.

But in December 2018, a dear friend of his mother’s died. He had taken a second job, and suddenly realized he just wasn’t happy in New York. And he realized he wasn’t able to make himself happy, a red flag of depression.

“I was starting to fray,” he admits.

He ended up resigning both jobs and moved home. And that smile is back on his face.

He’s living at home for now, helping with yard work, and taking care of the cats and the pool. He’s spending time with his brother, John, a Salisbury attorney. The longtime renter says he might like to buy a small house in the Historic District eventually.

“I’m surprised at the new vitality of downtown,” he says. “There’s a lot of young energy I sense with the new shops here.”

Basinger has joined St. John’s Lutheran Church, where his parents are members, and volunteered at the Pride Festival in June.

“I love it,” Basinger says of his work. “That’s been the biggest surprise since moving home. I figured I’d just find a job to get by, but I’ve found a niche in mental health.”