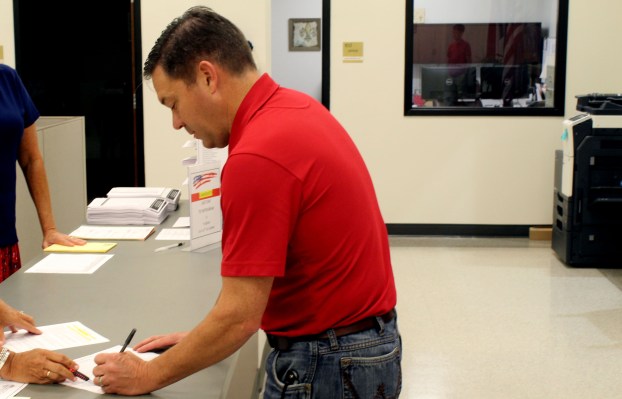 SALISBURY — Starting at noon Friday, candidates for municipal office began trickling into the Rowan County Board of Elections Office to file for the November elections.

Eleven candidates filed in races from East Spencer to Kannapolis, which drew three candidates, the most in any municipality. Filing continues until noon July 19.

The first to officially file was China Grove Mayor Lee Withers, who will be running for his second term.

Withers said he always planned to run for two terms. He said he is doing so for his son, Carson, and his son’s generation.

Withers said he is going to focus on infrastructure growth, recruiting industry jobs and “growth of events in this creation.”

Withers spoke to specific projects in the China Grove area, saying the Interstate 85-Old Beatty Ford Road corridor is primed for growth. There are “big projects” in the future, and the town has a “sense of community” unrivaled by any other municipality in the county

Withers’ experience in public office includes two terms on the China Grove Town Council and one term as mayor.

The second candidate to file was Cleveland Town Commissioner Travis Summitt, who will be running for re-election.

Summitt said his election goals include keeping taxes and fees low while focusing on growth.

Summitt said Cleveland is “poised for growth.” This is in part because of the town’s location, he said, noting there are three interstates nearby — Interstates 40, 77 and 85.

Still, Summitt said, the town needs to make sure that growth benefits everyone affected. Summitt said he would like to see the community come together and for progress on infrastructure to be made, that the town should continue to promote itself through its website and pamphlets.

“Spencer is starting to grow, and I want to be involved,” Doby said when asked why he wants to be mayor.

Doby said he would like to see more industry come to Spencer and that Fourth Street needs to be paved.

Asked about the fallout from the resignation of former Town Manager Terrance Arrington, Doby said the situation wasn’t handled appropriately. Doby said he would have dealt with it in a “more dignified way.”

Darrell Overcash filed Friday for the Landis Board of Aldermen.

“Landis is sitting on a gold mine,” Overcash said, noting expected residential growth. The town just needs the proper people to tap into the potential, he said.

He said the addition of the I-85-Old Beatty Ford Road interchange will help the town grow.

In an email to the Post, she noted a recent online reader poll in which a number of respondents said the council is doing a below-average job. She said the poll question was “reckless journalism” because the council had recently dealt with a divisive issue.

She said progress takes time and that she decided to run for re-election to serve her community.

“The responsibility of these elected officials is vital to all citizens,” Sheffield wrote. “This is not a position to be taken lightly nor should it be one taken without due diligence. … I believe the hard work and planning that is in place by the city manager and team needs continued support and a level-headed approach as well as detailed inquiries.”

Other people who filed Friday include:

• Ryan Carter, who filed for the East Spencer Board of Aldermen.

• Darrell Jackson, who filed for the Kannpolis City Council. Jackson previously served on the council and chose not to run in 2017.

• Samuel Morgan, for Spencer Board of Aldermen.

To file for a municipal offices in Rowan County, candidates must visit the Rowan County Board of Elections Office at West End Plaza. It’s open from 8 a.m. to 5 p.m. Monday through Friday.

The deadline for candidates to withdraw from a race is 5 p.m. July 16.