The debut: Zion Williamson arrives, amid much fanfare 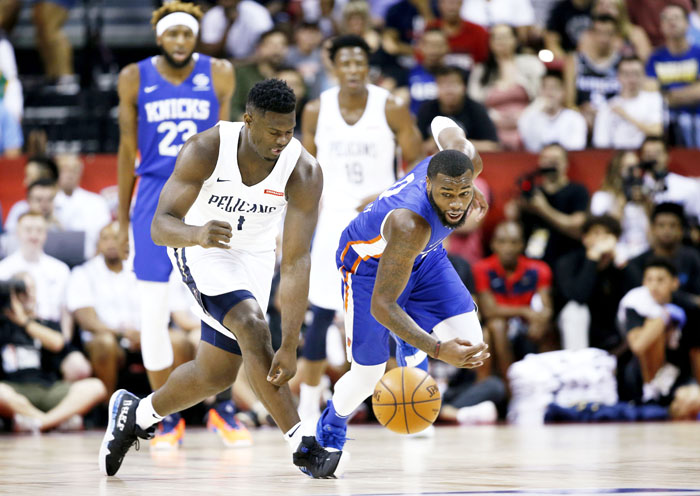 LAS VEGAS (AP) — Zion Williamson’s first NBA show was a sellout.
And it ended earlier than the fans wanted.
The No. 1 overall draft pick by the New Orleans Pelicans didn’t keep his adoring new public waiting for his display of dunks and power. With tickets commanding more than $500 on the resale markets throughout the day from those desperate to be part of the crowd — one that included LeBron James and Floyd Mayweather — Williamson took the floor as a pro for the first time Friday night at the NBA Summer League, scoring 11 points in nine first-half minutes against the New York Knicks and fellow former Duke star RJ Barrett.
But Williamson didn’t play in the second half because of a knee-to-knee hit, and fans who were chanting “We want Zion! We want Zion!” weren’t going to get any more than those first nine minutes.
So the event — maybe the hottest ticket in Vegas on a night when Reba McEntire and Brooks and Dunn were doing their thing at Caesars Palace, Gwen Stefani was at Planet Hollywood and Wiz Khalifa was playing a late show at a nightclub — ended earlier than anyone anticipated.
“Obviously, the guy we drafted put a buzz in the air for everybody in here,” Pelicans coach Alvin Gentry said.
That he did.
It would be inaccurate to say the whole NBA was watching. It only seemed that way.
James was in a baseline seat, a few spots to the right of San Antonio’s DeMar DeRozan. Mayweather arrived a few minutes before game time. Trae Young of the Atlanta Hawks was there and so was Lonzo Ball — James’ teammate with the Lakers, until the trade that sends him to New Orleans as part of the Anthony Davis swap happens on Saturday. Davis arrived in the middle of the first quarter, sitting for a few minutes with James and agent Rich Paul, watching the Pelicans on what will be his last night as a Pelican.
James arrived for the Lakers-Bulls game that preceded the Pelicans-Knicks matchup, and gave his soon-to-be-former teammate Ball a big hug between games. It made sense that he was there for the Lakers. And it was no surprise that he stayed to see Williamson.
“I’ve never met him,” James said.
Asked if he’d be willing to offer Williamson counsel, since he might be one of the few people in NBA history to enter the pro ranks amid such fanfare, James said he’d happily offer whatever he could.
“My line is open,” said James, the No. 1 pick 16 years earlier.
The Pelicans tried a lob to Williamson on the first play after the tap, and he got cheered for getting fouled. Then again, he also got cheered for coming onto the floor for warmups, for dunks in the layup line and when his name got introduced as the fifth and final starter for the Pelicans in the pregame introductions. They even cheered when he would get off the bench to go back into the game.
“We’re not going to do anything crazy with him,” Gentry said. “This gives you an opportunity to test out the speed of the game and things like that. That’s really all you learn from this.”
There had been two sellouts in NBA Summer League history in Vegas before Friday.
Then Friday sold out.
And Saturday has as well.
Sunday hasn’t yet. Reason? Williamson isn’t playing that day. The Pelicans play again Saturday night against Rui Hachimura and Washington. Summer League has gotten bigger and bigger each year, but The Zion Factor is very real — and a league that set an attendance record in Vegas last summer is well on its way already to smashing that mark this year.
“People want to be part of something big and special,” said Warren LeGarie, the summer league’s executive director. “And Zion loves the game. My partner Albert Hall, the brains of this operation, he ran Adidas Nations and Zion was with him since he was 14 years old. He has a picture of Zion in a tub of ice because he’s overheating because he loved to play so much.”
And on Friday, at long last, he was in the NBA.
___
More AP NBA: https://apnews.com/NBA and https://twitter.com/AP_Sports