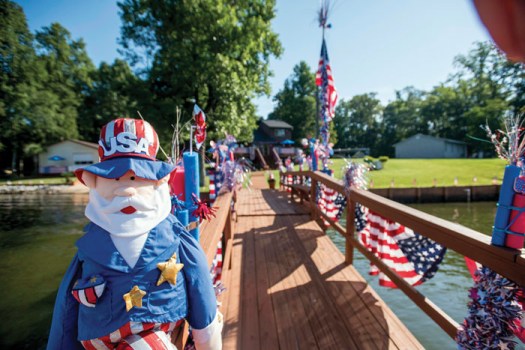 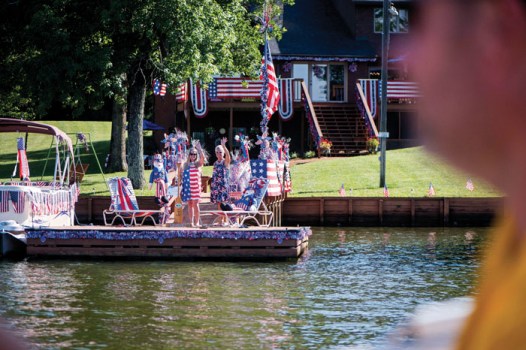 HIGH ROCK LAKE — Kim Hardiman helps her sister, Kris Hall, decorate her house and dock for every holiday, but this year their Fourth of July decorations earned them a trophy.

One sister was watching the windows in the front of the house and the other, those at the back, on Wednesday morning as they waited for representatives of the High Rock Lake Association to bring them their trophy and a $500 gift card to Rock Outdoors.

Kris and Randy Hall’s dock, in the neighborhood of Crane Cove and the Crane Creek section of the lake, is the winner of the association’s first July 4th dock decorating contest.

“Uncle Sam has gotten a lot of attention this week,” Kris said, referring to the two stuffed Uncle Sam figures on her dock.

Earlier this week, people on a passing pontoon boat saw the elaborate dock and honked at her husband, Randy, while he was grilling outside.

“He pushed it over the top,” said Bobby Childers, vice president of the High Rock Lake Association, who helped judge the decorations.

The dock was a firework of stars and stripes, with flags and ribbons adorning most surfaces. A red, white and blue garland hung off the edge of the dock, and small American flags lined the yard and the side of the boat.

Although they say they would’ve decorated the dock anyway, the sisters decided to enter the competition after hearing about it from High Rock Lake Association President Lee Snow.

The contest was Joyce Caron-Mercier’s idea. She is the secretary of the association. When she moved to the area three years ago, she noticed a sort of divide of lake-goers into two separate communities associated with the two regions of the lake.

“This was a great way of pulling both communities together,” Caron-Mercier said. “Kind of like its own little stationary parade.”

The High Rock Lake Association has about 800 members and an 18-member board. Dock owners did not have to be a member to participate in the contest.

The judging was on Monday and Tuesday, taking up much of the judges’ time as they searched for dock entries across the lake. Caron-Mercier said there were 29 entries, above the goal of 25.

Although Hall and Hardiman’s teamwork earned the first prize, the contest awarded honorary mentions in both Rowan and Davidson counties.

At Hall’s house, Snow presented the trophy and Childers, the official certificate. Lake association members Ron Gibson and Ann Marie Clark also attended, in addition to Clark’s younger relative Ally Veloce, who is visiting from New Jersey and accompanied the judges as they visited all the dock entries.

The sisters’ outfits matched their dock’s patriotic theme, right down to their painted red toenails. Self-proclaimed “river rats,” they grew up on the lake.

Their parents will be surprised to see the trophy for the first time today. They also have a long history at High Rock Lake, where they were involved in building Tamarac Restaurant and Marina.

Decorating is something Hardiman and Hall have done together for years with or without competitions to motivate them. Hall said Hardiman, who lives nearby, is the creative force at the lake house. Randy Hall is the official supervisor.

“It’s part of our family time together,” Hall said.

For a year, the sisters can add an oar-shaped trophy to their dock. Clark found the oar at an antiques store in Lexington, and its base is made of lake driftwood. As the competition goes on in future years, winners’ names will be added to the back of the oar.

“We need to put our dalmatians on it to guard it,” Hall said jokingly.

Luckily, Caron-Mercier was there to point out that the trophy is complete with suction cups on the bottom so that it can be safely displayed for lake visitors to see.

Hall and Hardiman will have to decorate their dock again next year if they hope to keep the trophy, but that doesn’t seem to be an issue. The sisters are already planning for that.