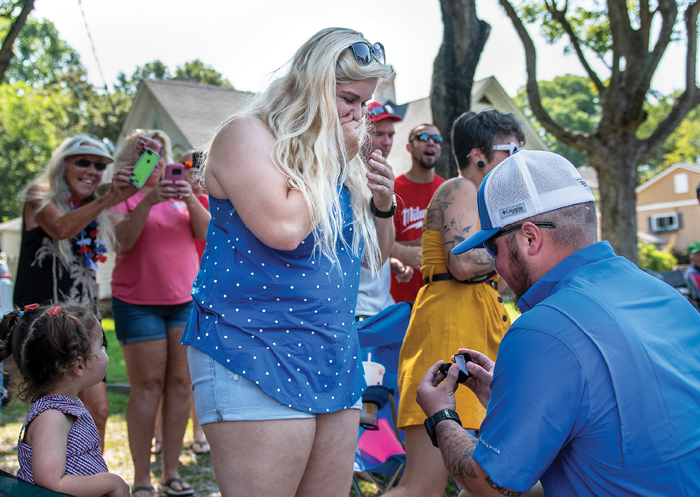 FAITH — In a surprise proposal at the Faith Fourth of July parade, Mason Morrison asked his college sweetheart, Stephanie Sides, to join him in marriage.

Morrison, who is 23, and Stephanie Sides, who is 24, have known each other since they studied at Guilford College together. It has been five years since then, Morrison said.

Thursday’s proposal came as a surprise to Stephanie Sides amid the roughly two-hour, mile-and-half long Faith Independence Day Parade. The parade has a special meaning for the couple, who have attended the parade together for the past four years, Morrison said.

Minutes after the proposal, Stephanie Sides, who said yes, said she “had no idea it was going to happen.”

Stephanie Sides was accompanied at the parade by Morrison’s family, but she didn’t know that Morrison would be able to come to parade. She thought he was at work, she said. But Morrison was participating in the parade, without Stephanie Sides knowing, as part of the Carolina Pickers trucks entry.

As the Carolina Pickers entry was passing Stephanie Sides, Morrison popped away from the trucks with a poster in hand, saying, “Will you marry me?”

Stephanie Sides smiled and answered “yes,” as the two hugged, gazed into one another’s eyes and kissed.

Stephanie Sides said she “had no idea this was the way he was going to do it.” She felt pleasantly “shocked and surprised.”

Asked why he chose to propose on the Fourth of July in the town of Faith, Morrison said it “seemed right.”

Morrison’s family greeted the news with warm remarks and smiles.

Payton Morrison said she knew the proposal was coming and had been waiting on it “for a long time.”

“I’m glad (Stephanie Sides) is my family now,” Payton Morrison said. It’s like getting another sister, she said.

The proposal is “something to remember for the rest of my life,” said Randy Morrison, Mason Morrison’s father.

He added he is happy to have a new addition to the family.

“Love it,” said Andrea Morrison, Mason Morrison’s mom. “I knew it was going to happen this year.”

The parents of Stephanie Sides welcomed the news as well.

“I am very happy to have Mason as a part of the family… Welcome to the family Son!” said Mike Sides, Stephanie Sides’ father.

“My heart was so full to see her happy,” said Carol Sides, Stephanie Sides’ mother. “Can’t wait for all the exciting plans to come for the wedding,” she said.