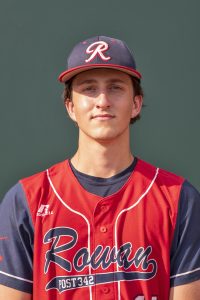 SALISBURY —  Scout Nichols — it’s Scout, not Scott — owned an extraordinary first name, but he was basically an ordinary pitcher for several years.

Now he’s better than ordinary. After dropping down from a three-quarters arm slot to a sidearm delivery, he developed into a key member of the bullpen for West Rowan High.

“Scout was a guy who was throwing three-quarters, but he wasn’t having as much success as he wanted or as much as we wanted him to have,” said Seth Graham, who coached Nichols at West Rowan and also serves as a Rowan County Legion assistant coach. “Throwing three-quarters, he had a tendency to drop his elbow and the ball was running inside on him too much. He was hitting some people and he wasn’t throwing enough strikes. I approached him about trying sidearm, and he was open-minded about it. I helped him get started, but he’s the one who took it and ran with it. He was the one who made it work.”

The transition and transformation to sidearm for Nichols began during his junior season at West in the spring of 2018.

“It was April, the middle of the season, when Coach Graham approached me about making a change,” Nichols said. “I threw a few bullpens with the lower arm slot, and then I went out and tried it in a game, and the surprise to me was that it wasn’t a shock. It didn’t feel awkward. It actually felt comfortable and natural. I saw it as an opportunity to be a better pitcher and to help my team more.”

Nichols, a right-hander, pitched only nine innings in seven appearances for West as a junior and had a 1-2 record, but his progress continued with the Rowan Legion team in the summer of 2018. He was a surprise. He made the team and went 1-0.

Nichols continued to make strides last fall in the league that East Rowan puts on for the local schools.

“I was pitching really well back in the fall, and one of my teammates suggested I go to a camp down in South Carolina because there were going to be 50-some college coaches there, and someone might see me and give me a chance to pitch for them,” Nichols said. “I did very well in the scrimmages there.”

That Impact Baseball camp in North Myrtle Beach opened doors for Nichols. That was where Erskine College coaches saw him for the first time.

That led to Nichols being invited to tour the campus and attending a camp for potential recruits. Not long after that, Nichols got a phone call from Erskine that included an offer with baseball scholarship money, and he signed with Erskine, a Division II school that competes in Conference Carolinas with schools such as Belmont Abbey, Barton, Mount Olive, North Greenville and Limestone. Erskine is located in Due West, S.C., about three hours from Salisbury. Anderson and Greenwood are the closest cities.

“Every baseball team, high school, Legion or college wants a guy in their bullpen who can throw drop down and throw sidearm,” Graham said. “Everywhere I coached, we always wanted one of those guys. A pitcher like Scout, he can be tough on the right-handed hitters. You get to a place in the lineup with three or four right-handed batters in a row, and he can be really effective.”

For a sidearmer such as Nichols, velocity is almost irrelevant. His game is all about movement and deception. He’s coming at hitters from an angle they don’t face very often. Maybe you could adjust to him the second time through the lineup, but his job is short relief. Unless a game goes into extra innings, it’s unlikely any hitter is going to see Nichols more than once.

“It’s not easy for a hitter to adjust to a pitcher like Scout because it’s such a different look,” Graham said. “And Scout does a good job of keeping the ball in on the hands of right-handed hitters. The next evolution for him is going to be finding more ways to get those lefty hitters out, but he’s smart about it. Usually, he can pitch around a good lefty hitter to get to some more right-handers.”

Nichols’ bread-and-butter pitch is a four-seam fastball that looks hittable when it starts out, but usually it rides up and in to right-handed swingers. He also has a changeup, a split-finger and a slider that he’ll mix in. He’s working on a sinker to fool more of the lefties. They’ve got a really good, long look at the ball from Nichols’ release point.

“Definitely the lefties are the toughest outs for me,” Nichols said.

There’s still spirited debate on whether sidearm pitching is easier — or harder — on arms, elbows and shoulders, but Nichols has embraced his unorthodox style. He has no plans to go back to being a “normal” hurler.

Nichols turned in a strong senior season at West. Graham used him in 14 of West’s 25 games, and he was 2-0. He threw two scoreless innings against hard-hitting Central Cabarrus and Davie County squads.

Nichols said the most memorable game from his senior season was West’s victory against East Rowan at Staton Field.

“I’d come in for the seventh inning in relief of Daniel (Durham) and I walked two guys,” Nichols said. “Coach Graham came out to the mound and asked me if I could do it, and I told him I really wanted to finish it for the guys. He left me in, and I was able to finish off that win. That was a game that stands out for me, but I had a pretty consistent senior season.”

For Rowan County, as this summer has ridden a roller coaster of ups and downs, Nichols has become an increasingly important arm out of the bullpen.

Rowan called on Nichols a critical juncture in Sunday’s tense victory against Stanly County at Newman Park that closed the regular season. Nichols pitched the sixth when the game was 2-all and was able to work out of a bases-loaded jam. He earned the win when Rowan’s offense exploded for seven runs in the bottom of the sixth.

Nichols won the 11-inning game at Greensboro with three scoreless innings. He secured the last five outs against Eastern Randolph in a 4-3 victory. He pitched the seventh to save a 7-4 win at High Point. He also came in and got two big outs in Rowan’s 10-inning win against Mooresville.

For the summer, Nichols is 3-1 with a 1.56 ERA. He’s earned the trust of the coaching staff. In the playoffs, which get started at home for Rowan on Friday, he’ll be counted on for key outs in the fifth and sixth innings.

“I’m still learning every game and still improving my control,” Nichols said. “Legion baseball has been a very good experience and it’s done a lot for my confidence.”