Families found a place to play Tuesday at RiverPark at Cooleemee Falls, also known as “The Bullhole,” on the South Yadkin River. 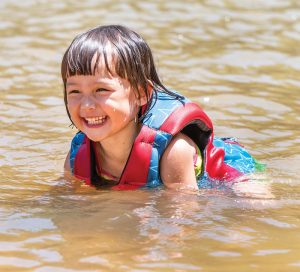 The nature park at an old dam offers hiking trails, swimming, picnicking, fishing and a shelter that can be rented.

The dam was built in connection with the old Erwin Cotton Mill.

The Bullhole name, one story goes, dates to when the Erwin Mill was being built at the turn of the 20th century. Oxen and mule teams were hauling timbers across the river, and an elderly man’s favorite bull ox was knocked off its feet in the churning water. The frantic owner watched his bull ox slip away and disappear into the river.