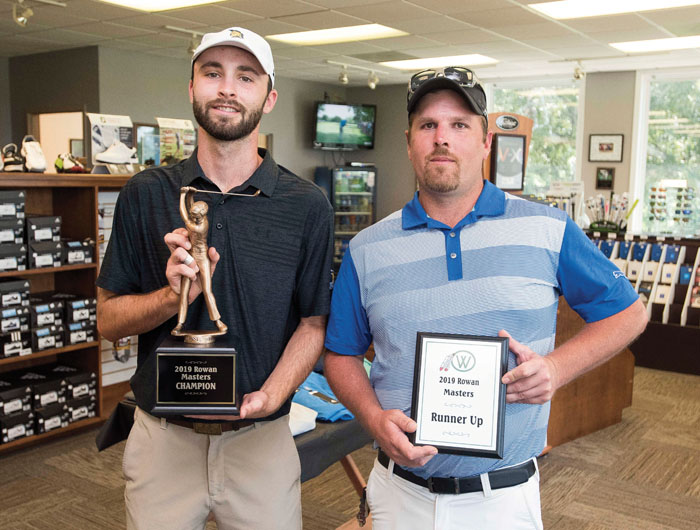 JON C. LAKEY/SALISBURY POST Nick Lyerly (left) finished as the 2019 champion of the Rowan Masters golf tournament on Sunday afternoon. Lyerly finished 8 and 7 in a two hour match play round to runner-up Kyle Wright (right) at the Warrior Golf Club. Warrior's golf pro Brian Lee awarded the pair the trophies in the pro shop after the match. China Grove, NC 6/30/19

CHINA GROVE — As dominant as Nick Lyerly has been in local golf competition the past five years, even he had to be surprised with the manner in which he claimed his first-ever Rowan Masters tournament championship Sunday afternoon at the Warrior Golf Club.

Lyerly, 20, a rising junior at UNC-Greensboro, didn’t dazzle in the championship match as he shot even par with one birdie and one bogey. But he was always one step ahead of runner-up Kyle Wright from the beginning and cruised to an 8 and 7 win.

“I was just trying to hit the middle of the green and just not mess up,” said Lyerly. “But it is always good to win a tournament, no matter what tournament it is or how big it is.” As for Wright, 34, of Salisbury, this was his first Masters tournament as well and he made his presence felt immediately with four impressive match wins to reach the finals. But then the wheels came off when the trophy was on the line.

“Yeah, everything just fell apart,” he said. “I got gassed and I ran out of energy. I just didn’t feel comfortable with the golf club in my hand this afternoon —  just felt like it was going to fly out of my hand.”

The championship match at the par 71 Warrior course took just over two hours with Lyerly closing it out on the 11th hole with a par. After the two halved the opening hole, Lyerly won the next four holes to build a big lead. Wright rallied to win the par 3 sixth hole to cut the margin to 3-up, but Lyerly rattled off wins on the next five holes with steady pars to close out the match. At the same time, Wright was having trouble off the tee and missed a couple of critical putts in the final three holes.

It had not been a winning summer so far for Lyerly as he missed the cut in two major events, including the North-South event in Pinehurst this past week. So winning the Rowan Masters might be a turning point for him.

“I hope it kick-starts my game in terms of wins and how I am playing,” he said. “This is my first time to play in this event because I am usually playing in other tournaments this time of the summer. So this one really means a lot to me.”

The 15th annual Masters returned from a one year hiatus as the Warrior Course underwent a major makeover last summer. Match play began on Friday with 28 golfers in the field including defending champion Keith Dorsett, an 8-time winner of the event. Lyerly led qualifying for the tournament with a one-under 70 a week earlier to claim the second seed while Wright was seeded ninth with a qualifying round of 75.

Lyerly advanced with wins over Owen Swavely 2 and 1, Patrick Gregg (injury default), then a semi-final win Sunday morning over rising East Rowan senior (and former Mustang teammate) Austin Miller 4 and 3. Wright, a 2004 East Rowan graduate, cruised over Jarrett Freeze 6 and 5 then beat Scott Fagg 4 and 3 to set up a quarterfinal match with defending champion Dorsett. Wright made the rest of the field stand up and take notice when he outlasted Dorsett Saturday afternoon 1-up in 21 holes.

Wright then reached the finals by rallying past Brandon Phillips in Sunday morning’s semi-finals 1-up. He was one down after 12 but won 13 and 14 with a birdie and a par to take the one hole lead that held up through the final four holes. There was reason for optimism heading into the championship match.

“I just let it get away from me,” Wright said. “I wish I could have played a lot better than I did but Nick is just a phenomenal player. I can’t give him enough credit. He played his butt off that’s for sure and that was a well-deserved win for him.”

Both finalists indicate they have plenty more golf competition planned for this summer. Wright said he would definitely be in this year’s Labor Day golf tournament and others prior to that. Lyerly will be back in action July 11-14 in the prestigious Player’s Amateur at Berkeley Hall Club in Bluffton, S.C. After that, later in July, he will return to defend his Horace Billings Rowan Amateur championship at Corbin Hills Golf Club.