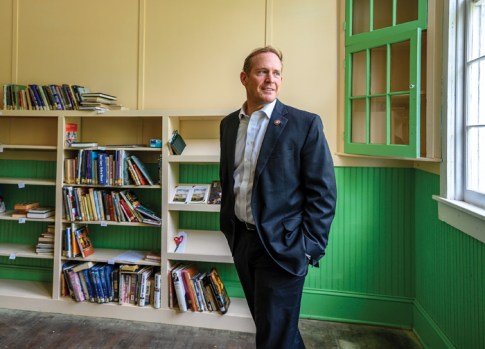 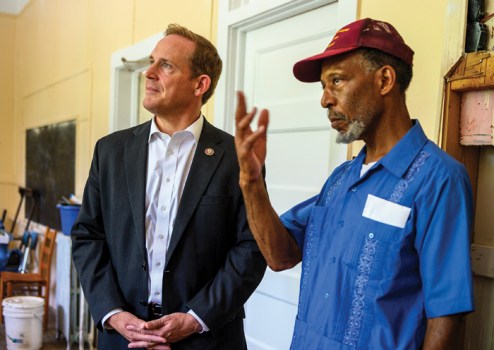 Leonard Hall, right, shows U.S. Rep. Ted Budd out some of the things that need to be fixed in the 1928 R.A. Clement School on Friday in Cleveland. Bernadine Hernandez/Salisbury Post 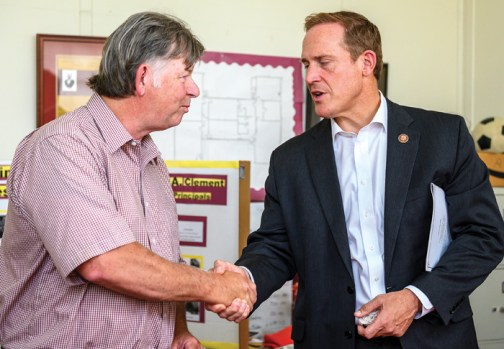 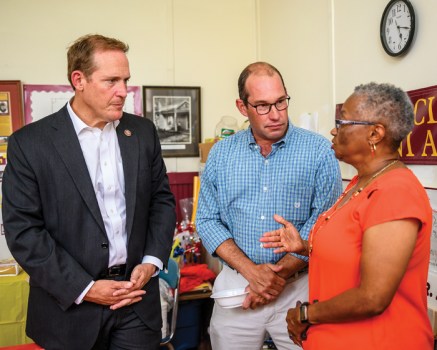 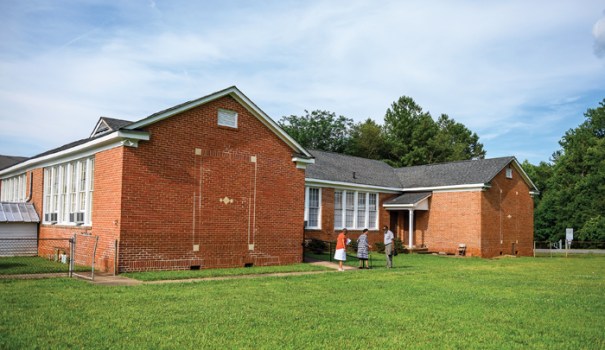 he 1928 R.A. Clement School building has been placed on the National Register of Historic Places. Bernadine Hernandez/Salisbury Post

On Friday afternoon, alumni returned once again to unveil a plaque designation its inclusion on the National Register of Historic Places with the help of U.S. Rep. Ted Budd, R-13.

R.A. Clement School opened in 1878 as a one-room school and expanded over the years. The school served African-American students in western Rowan County starting in 1948. Its last graduating class was in 1968 as West Rowan High School became fully racially integrated for the class of 1969.

Carolyn Steele Snipes, president of the R.A. Clement Association, attended the school until her senior year. She decided to attend West Rowan High when freedom of choice was in effect and graduated from there.

What she learned at Clement School shaped her as an educator of 48 years and counting, she said. She recalls the teachers going above and beyond to help students with resources and field trips.

“Somehow, they provided for us,” Steele Snipes said.

Claude Hosch spoke fondly of the teachers who not only taught the students but also mentored and cultivated them. The teachers would explain anything from personal hygiene to how to speak on the phone, he said. They prepared the youths for college even if they were not planning to go.

Hosch still values the discipline he learned. His younger siblings did not attend R.A. Clement, and he said there are differences between them and him and his older siblings.

“I don’t think I would be the person I am today if I didn’t go to R.A. Clement,” Hosch said.

Hosch had the option to leave R.A. Clement but decided to stay despite pressure to attend West Rowan.

“I started here,” Hosch said. “I should stay here at R.A Clement.”

Budd commended the community’s loyalty to the school.

“It was loving and fierce loyalty that they had toward the school,” Budd said. “They felt pride that they had been there, even though that school from beginning to end was about 20 years from the mid-’40s to the mid-’60s before they went to West Rowan. They felt tremendous loyalty to it.”

The listing for the National Register of Historic Places takes note of the hard work the alumni has done over the years.

“We have worked so hard to restore this building,” Steele Snipes said. “It’s hard to express the feeling of finally being on the list.”

The building needs some work, and organizers have a deadline: A reunion is planned in July 2020.

Steele Snipes asked Budd how he and the U.S. Department of the Interior can help guide them to funding to complete three phases, including adding heating and air conditioning and restoring the kitchen and classrooms.

“We’ve been on a long journey, which you probably have read our history in trying to complete this project,” she said.

Budd said Friday was his first visit to R.A. Clement and his office will help with resources.

“I appreciate all that you’ve done here, and I encourage any remaining work that you have to do,” Budd said. “I look forward to coming back and again it’s not a far drive for me to come down to Cleveland, so please keep me posted when you have things that come up or you got events or when you run into challenges or when you want to talk grants, our office is open for you.”

Patricia Rice Moriniere, a member of the advisory board and alumni association, asked Budd about how the school can become a community partner and bridge gaps.

He recommended one-on-one conversations in the community.

She said Clement alumni want to share the wealth and offer the building as a place to host community activities.

Steele Snipes said she is unsure where the plaque will hang, but she is excited to display it.