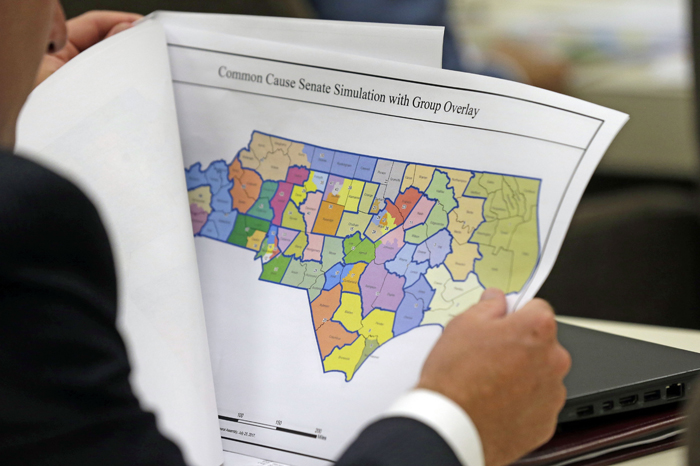 A lawmaker studies a district map during a joint select committee meeting on redistricting in July 2017 in Raleigh. Gerry Broome/Associated Press

An election reform group, the state Democratic Party and voters will go to court in two weeks to try to convince state judges that Republican-drawn General Assembly districts discriminate against Democrats based on their political beliefs and voting history.

What’s different in this case is that the plaintiffs — some of whom sued in federal court over the state’s congressional map, which ended with Thursday’s 5-4 Supreme Court decision against them — argue the House and Senate boundaries violate the state constitution, not the U.S. Constitution.

“We are confident that justice will prevail in the North Carolina courts,” said Bob Phillips of the North Carolina office of Common Cause, which is a plaintiff in both matters. “And we will continue to work with state lawmakers to reform our broken redistricting system that has left far too many without a voice in Raleigh.”

Voting-rights advocates across the country have vowed to turn to state litigation after Chief Justice John Roberts wrote in the opinion addressing North Carolina and Maryland cases that federal courts have no authority to determine whether partisan gerrymandering is unconstitutional.

Addressing complaints of partisan gerrymandering in state courts has already succeeded in Pennsylvania, where last year the state Supreme Court struck down congressional districts based on language in the Pennsylvania constitution that is similar to North Carolina’s. That ruling led to the court redrawing congressional lines. Democrats picked up four additional seats in 2018.

The pending partisan gerrymandering case filed in Wake County court marks at least the eighth lawsuit challenging North Carolina maps on the basis of racial and partisan bias since the current round of redistricting began in 2011. The lawsuits resulted in redrawing congressional lines in 2016 and legislative districts in 2017 — both to address racial bias. The state has spent millions of taxpayer dollars defending the maps.

Unlike the conservative majority on the U.S. Supreme Court, the state Supreme Court that would hear the appeal of the trial court’s decision has six registered Democrats and one Republican.

“My guess is that the North Carolina court — given its composition — will think differently than the U.S. Supreme Court,” said Guy-Uriel Charles, a Duke University redistricting expert and co-director of the Duke Law Center on Law, Race and Politics.

In previous decades, the state’s Democrats drew maps favoring their candidates that also ended up in court. U.S. Supreme Court rulings in the 1980s, 1990s and 2000s plowed ground on the limits of shaping boundaries to achieve more representation by candidates supported by black voters.

But litigation by political rivals and civil rights groups went into high gear against Republicans who controlled the mapmaking after winning legislative majorities in 2010. There was a national effort by the GOP to win statehouses and set the course for district lines.

North Carolina maps drawn in 2011 helped legislators create veto-proof majorities at the General Assembly, allowing them to advance their agenda on taxes, abortion and the environment. Republicans ultimately held 10 of North Carolina’s 13 seats in Congress.

The state House’s chief mapmaker this decade has called on the plaintiffs in state court to withdraw their case because of Thursday’s ruling. Those suing have no plans to withdraw.

“The U.S. Supreme Court just reaffirmed that redistricting is an issue that should be worked on here by elected legislators, not decided in court,” state Rep. David Lewis said.

Roberts’ opinion, however, doesn’t say state judges are prevented from adjudicating these matters. “Provisions in state statutes and state constitutions can provide standards and guidance for state courts to apply,” he wrote.

Plaintiffs in the North Carolina case are equipped with what they allege is damming information from longtime GOP redistricting consultant Thomas Hofeller, who died last year. Their attorneys have said the records, subpoenaed from Hofeller’s estranged daughter, will show that Republican lawmakers misled judges about how and when legislative maps are drawn.

“When Americans hear what those motives are, we believe that the people will soundly reject partisan gerrymandering and replace it with much more transparent and community-driven processes,” said Kathay Feng, Common Cause’s national redistricting director.

Lawyers for GOP legislators said no one lied and suggest Hofeller’s documents may have been obtained in an unethical manner. The three-judge panel presiding over the July 15 trial scheduled a hearing next week to decide whether materials from Hofeller or his daughter can be used.

Should the state Supreme Court ultimately rule against Republicans, they could be forced to draw new maps and have them ready for the 2020 elections. Democrats already made electoral gains in 2018 that ended the GOP’s veto-proof majorities at the General Assembly.
They need to win only five additional seats in both the House and Senate next year to take back full control.

House Minority Leader Darren Jackson of Raleigh said he’s confident Democrats can win a majority in his chamber. But he insists that Democrats will resist the temptation of taking the reins of drawing maps for partisan advantage for the next 10 years.

Democrats and some Republicans have pitched the idea for years of giving the job of drawing districts to an outside group. Voters in five other states approved redistricting commissions in 2018 — another method reformers plan to keep pushing.