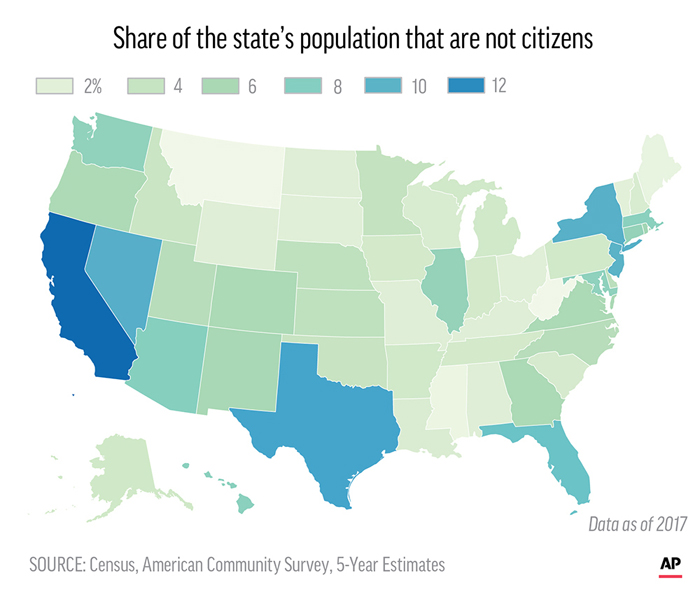 Percentage of the state's population that are not citizens. Associated Press

As he advised in a 2011 presentation about redistricting strategies: “Make sure your computer is in a PRIVATE location,” and, “Don’t walk away from it and leave your work exposed.”

But less than a year after his death, Hofeller’s own electronic records threatened to upend two major legal battles unfolding in the courts.

Opponents of the Trump administration’s plan to include a citizenship question on the 2020 U.S. census say records found on a hard drive in Hofeller’s Raleigh home unmask partisan intent, including language nearly identical to the Justice Department’s justification for the question: aiding enforcement of the Voting Rights Act. The U.S. Supreme Court ruled Thursday that the rationale seems contrived and sent the case back to a lower court in New York.

In Republican political circles, Hofeller earned near-legendary status as a behind-the-scenes numbers cruncher who used voter and election data to draw maps he believed would comply with ever-changing redistricting rules over the decades — and help his party.

Through the Republican National Committee, the National Republican Congressional Committee and later a consulting firm, Hofeller said he had analyzed and drafted district plans in more than half the states. His resume included a role in more than 30 redistricting lawsuits, where he was usually defending a map that favored Republicans or finding fault with one that boosted Democrats.

In the late 2000s, he was involved in the Redmap project, a full-throttled effort to win as many state legislative seats for the GOP in 2010 as possible. That class of lawmakers would control the new district boundaries for state and federal legislative seats, cementing GOP power for a decade.

The plan worked. As the tea party helped the GOP take control of the U.S. House of Representatives, the party also flipped control of 21 state legislative chambers. The resulting maps have helped keep the GOP in power even in some states where more votes are cast for Democrats.

“They were strategic in understanding the ramifications of redistricting. Tom understood that,” said Tim Storey, a redistricting expert at the National Conference of State Legislatures, who knew Hofeller for years. “There was no Tom Hofeller on the Democratic side.”

The strategy weakened the political power of African-Americans and Democrats, making Hofeller’s work reviled among opponents who claim it ran afoul of the Constitution.

The rancor stood in sharp contrast with the demeanor of Hofeller, a native Californian who sang for years in a church choir.

“He was a genial guy,” said Storey, now NSCL’s executive director. “He didn’t have blood dropping from his fangs.”

The self-effacing Hofeller downplayed his role in the redistricting process.

“What I’ve always said is that an architect draws or designs a building,” he said in a January 2017 deposition in a lawsuit challenging his North Carolina map, “according to the specifications by the person who wants the building built.” 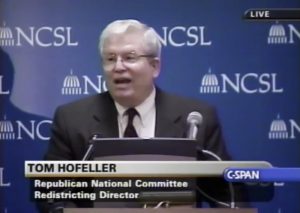 In this Aug. 13, 2001, file frame from video provided by C-SPAN, Tom Hofeller speaks during an event at the Republican National Committee in Washington. C-SPAN via AP

Hofeller died at 75 last year in Raleigh, where he and his wife, Kathleen, had moved in 2014 from Alexandria, Virginia.

After his death, his estranged daughter, Stephanie Hofeller, was visiting her mother when she found several of her father’s hard drives and thumb drives. She said in a deposition that she was looking for family photos. She found them — along with her father’s work.

She told Common Cause, an advocacy group then claiming that North Carolina’s congressional and state legislative maps were drawn unconstitutionally to favor Republicans, about the drives and eventually handed them over through a subpoena. Republicans have challenged how they were obtained, saying in court documents that Kathleen Hofeller has dementia and did not have the capacity to let her daughter take the files.

Some of the documents were filed in court in May, just as the U.S. Supreme Court deliberated on whether the Census Bureau should be allowed to ask everyone in the country the citizenship question. The Census Bureau says it wants to ask at the request of the Justice Department, which says knowing where noncitizens are can help it enforce the Voting Rights Act and protect the right of minorities to vote.

Many Democrats say the question will discourage participation in the census among minorities, a theory supported by independent studies and the bureau’s own experts.

Plaintiffs in the cases say a report from Hofeller’s files reveals the true motive. In a 2015 study on the potential impact of basing Texas legislative districts on the number of voting-age citizens rather than total population, Hofeller wrote: “A switch to the use of citizen voting age population as the redistricting population base for redistricting would be advantageous to Republicans and non-Hispanic whites.”

Those same plaintiffs also contend that Hofeller helped President Donald Trump’s administration push for the citizenship question to set up the possibility of using citizen counts for redistricting in Texas and other states. The Justice Department denies that.

In their opinions, justices did not mention the Hofeller material but did say that Secretary of Commerce Wilbur Ross, who oversees the Census Bureau, offered “contrived” reasons for including a question that he wanted to include all along.

At least for now, the citizenship question won’t be included on next year’s census. It’s not clear if the administration will try to offer a new explanation in the New York court that first blocked the question.

In the separate North Carolina redistricting case, plaintiffs’ attorneys allege that Hofeller’s files show Republican lawmakers misled judges about whether there was enough time to draw new maps in 2017 so special elections for General Assembly districts could be held before the November 2018 elections. Lawyers for the GOP deny that their clients lied.

Stephanie Hofeller, who couldn’t be reached for comment, was once charged with destroying George W. Bush campaign posters in a Maryland case that was later dropped. But she said in a May deposition for the North Carolina case that her father wasn’t worried about the distant future and thought his work would no longer be relevant after he died.

“He had a penchant for irony, and he would often say, ‘Well, it won’t matter once I’m dead, right?'” she said.