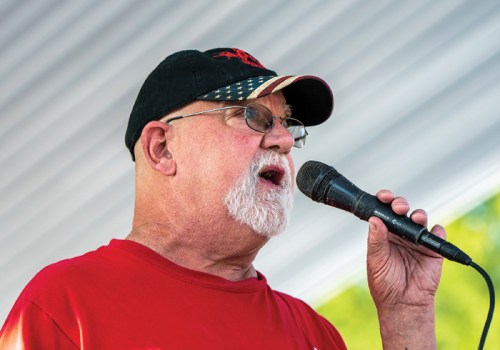 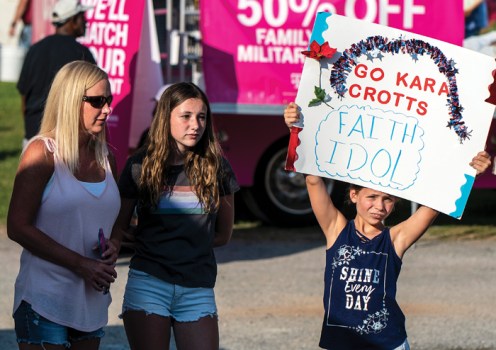 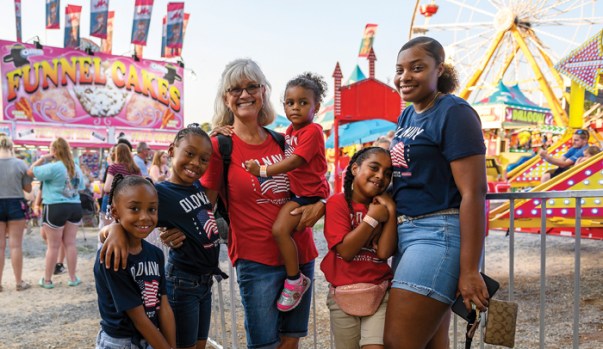 Becky Morris and her grandkids are all dressed in Old Navy shirts at the Faith Fourth of July on Saturday. Bernadine Hernandez/Salisbury Post

FAITH — Devon Blalock has attended the Faith Fourth of July festivities every year since he and his sister, Mackenzie Bezdziecki, were little. He wanted to continue the family tradition and bring his daughters, Lillyan, 5, and Ember, 3.

“Food is a big thing for us. The kids do the rides, and we do the food,” Blalock said Saturday as the celebration continued.

Blalock said he would likely be the one to ride all the rides with his girls.

Bezdziecki said even though it was hot Saturday, the family purposely arrived just as the amusement rides were gearing up to avoid the crowd expected later.

Faith’s celebration, which dates back to 1946, kicked off with a street dance last Saturday. It continues with concerts, rides, food and family activities daily through the Fourth of July, culminating with a parade at 10 a.m. Thursday, a hot dog eating contest at 9:30 p.m. and fireworks at 10:30 p.m.

Becky Morris has been attending the celebration since her children were little. On Saturday, she was with her granddaughters — Maleah, 7; Kimora, 10; Kadence, 7; Mariah, 3; and Izerica, 17.

Morris said she and her husband love the music and the food and the younger grandchildren love the rides. The family tries to attend every night.

“People don’t realize what a wonderful thing this is,” she said.

She said when she adopted a child from Romania 28 years ago and saw the poverty in that country, she returned home to Rowan County during the Faith Fourth of July celebration. Morris said it made her see life differently. 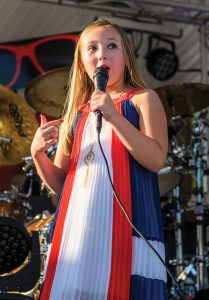 On Saturday, there were a number of performers on the first night of the “Faith Idol” competition. One performer, 9-year-old Kara Crotts, had never sung such a large crowd before.

She sang “Honey, I’m Home” by Shania Twain, a song she had practiced for weeks before the Saturday evening competition. The Faith Elementary School student was cheered on by her parents, Jody and Tracy Crotts, as well as her best friend, Taylor Vinson, 10.

“I came to support her,” Taylor said. “She’s probably going to win.”

Kara said she was more excited than nervous.

“I’ve always wanted to be a singer,” Kara said.

She is a fan of country music, especially artists Shania Twain and Dolly Parton, both of whom she drew inspiration from for her performance.

Jody Crotts said Kara prepared for the performance by working on her choreography and picking out her outfit. She wore a red, white and blue dress.

Evan Parton, who said he is a fifth cousin of singer Dolly Parton, also sang for the first time in the competition. He said he drew inspiration from the men and women who serve the country. The 62-year-old sang a veterans tribute song.

Parton said he performed “mainly because of what they did. I’m not a veteran, but because of veterans, they give me the opportunity to do this.”

Parton is vice president of Tribute to the Troops, an organization that honors fallen soldiers.

Lynn Moose has been a regular at the Faith Fourth for about 20 years. She attended with her grandchildren, sisters, nieces and nephews. Moose is a Novant Health employee, and Saturday was Novant Day at the celebration.

“We probably come out all seven days,” Moose said.

She said although they may not ride or take part in activities each time, they walk around or eat and listen to the music. Moose said for her, the best part is eating an elephant ear and drinking lemonade.

Hannah Hurlbut, 12, attended for the first time with her friend Destiny Milton, 12, whose family has been regulars since before she was born. The girls came out mostly to ride lots of rides and spend time with each other.

For more information on the Faith Fourth of July and a schedule of activities, visit http://www.faith4th.com/