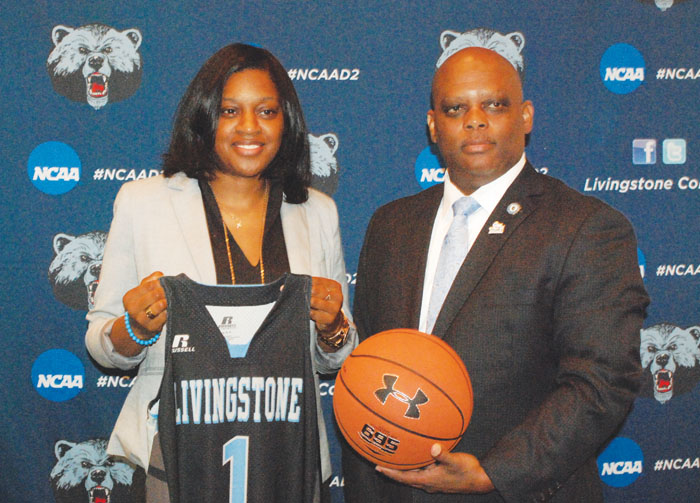 The position will be Wester’s first as a head coach, after serving 13 years as an assistant at Virginia State University. She was also a student athlete in the CIAA, having played at Shaw for two seasons, before graduating in 2003.

“This is a new day,” said Wester. “I am truly excited to be here and bring back a winning tradition to Blue Bear country. I strongly believe that a team is a reflection of its leadership. And under that leadership, this team will exemplify commitment and discipline.

“We will compete on the court, in the classroom, as well as in the community,” continued Wester. “There’s a lot of talent here and I plan to bring the best out of each member of this team.”

At VSU, Wester assisted head coach James Hill Jr., who was on the staff at Shaw during her playing days. Under Hill, the Trojans are 168-114 over the last 10 years — 56-30 during the last three seasons. Wester was actually at VSU prior to Hill’s arrival and was on staffs that enjoyed over 200 wins.

“Coach Wester has been an integral part of the success at Virginia State,” said Livingstone athletic director Lamonte Massie-Sampson. “Livingstone athletics is extremely proud and excited that she is joining our staff. We can’t wait to have her on campus and get things moving forward. She will be hitting the ground running on Monday.”

Also during her tenure at Virginia State, Wester was part of five regular-season CIAA division championships, four NCAA appearances and the 2015 CIAA championship. She also mentored several all-conference players, CIAA Players of the Year, the first ever VSU HBCU/CIAA Player of the Year and academic All-Americans.

Wester worked primarily with the guards at VSU and was heavily involved in recruiting. She acknowledged that her coaching style will most likely resemble what she learned under Hill and Shaw coach Jacques Curtis.

“My plan is for us to be up tempo on both ends of the court — offense and defense,” added Wester. “We want to push the ball and be able to defend in each and every game.”

Wester was born in Havana, Fla., and was an outstanding student athlete at Havana Northside High School. She played two seasons of basketball at North Florida, before transferring to Shaw.

At Shaw, Wester received several awards, including one for outstanding service and another for most improved basketball player. She was also an outstanding student honoree.

Wester opened the press conference by thanking Livingstone President Dr. Jimmy Jenkins, “for the faith in me to lead this program. And Mr. Massie-Sampson, for choosing and believing in me.  I want to also thank my Trojan family for their love, support and kind words throughout the process.”