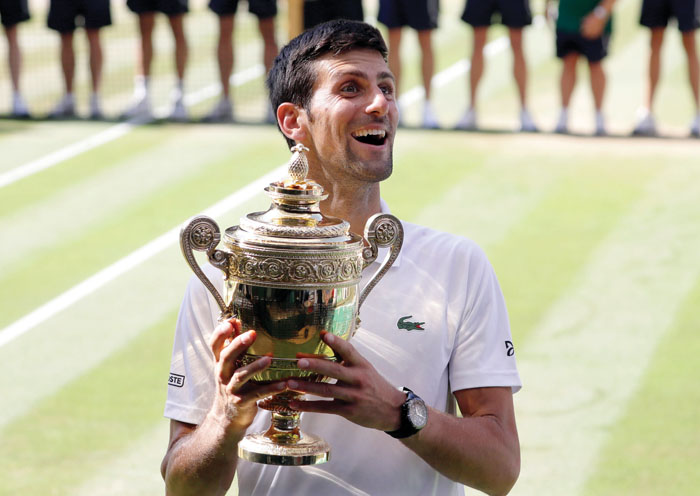 FILE - In this July 15, 2018, file photo, Serbia's Novak Djokovic holds the trophy after winning the men's singles final match against Kevin Anderson of South Africa, at the Wimbledon Tennis Championships, in London. As the start of play at the All England Club approaches, nothing captures the completely disparate states of men's and women's tennis at the moment than these two recent trends: The Big 3 of Roger Federer, Rafael Nadal and Djokovic have combined to win the past 10 Grand Slam tournaments, while nine women have collected major trophies in that span, including a half-dozen first-time champions. (AP Photo/Kirsty Wigglesworth, File)

WIMBLEDON, England (AP) — As the start of Wimbledon approaches, two recent trends capture the completely disparate states of men’s and women’s tennis at the moment.

Roger Federer, Rafael Nadal and Novak Djokovic have combined to win the past 10 Grand Slam tournaments, while nine women collected trophies in that span — including a half-dozen first-time major winners.

And consider this: There hasn’t been a first-time men’s champ at any Slam tournament since Marin Cilic at the 2014 U.S. Open.

At the All England Club, where play begins Monday, the superiority of that select group of men is particularly pronounced. One needs to go all the way back to 2002 to find a men’s champion outside of the quartet of Federer, Nadal, Djokovic and Andy Murray, who will be playing only doubles this time as he works his way back from hip surgery.

Since Federer claimed his initial Grand Slam title at Wimbledon in 2003, he has won the grass-court tournament a men’s-record eight times. Djokovic owns four trophies at Wimbledon; Nadal has two. They rank 1-3 in overall majors for men, with Federer atop the list at 20, Nadal next at 18 and Djokovic third at 15.

That same dynamic was in play for years in women’s tennis, but with just one player dominating: Serena Williams. She accumulated title after title, only occasionally facing much resistance while raising her count to 23 singles majors, more than anyone in the Open era, which dates to 1968.

That left her one short of equaling Margaret Court’s total of 24, accomplished against both amateurs and professionals.

Williams took a break from the tour after winning the 2017 Australian Open while pregnant and, not coincidentally, that was the start of the current anyone-can-win stretch, in which Ash Barty, Naomi Osaka, Simona Halep, Caroline Wozniacki, Sloane Stephens and Jelena Ostapenko each won her first major championship.

It’s not just about who is taking home the trophies. Take a look at the most recent major, the French Open.

Nadal, who won there for the 12th time, Federer and Djokovic were all in the men’s semifinals. The women’s final four, meanwhile, featured a pair of unseeded semifinalists for the first time in Paris since the introduction of 32 seeds in 2001; the champion, Barty, hadn’t even been to the fourth round at any Slam until last year’s U.S. Open.

Barty’s subsequent rise to No. 1 in the ranking highlighted another way in which men’s and women’s tennis have been different: She was the 17th player to sit atop the WTA since 2005; only four men — Federer, Nadal, Djokovic and Murray — have led the ATP in those years.

Despite a career record of 2-3 at Wimbledon, Barty is the bookmakers’ favorite. Djokovic, Federer and Nadal are, not surprisingly, the top choices among men.

Truth is, with the way things are, it would not be all that shocking to see just about anyone in the women’s draw hold the trophy at the end of the fortnight.

Any man outside of the Big Three would cause quite a stir.

“It would be highly surprising if it’s not one of those three guys at this stage,” McEnroe said. “I think a lot of us want to be surprised and see who could step up.”