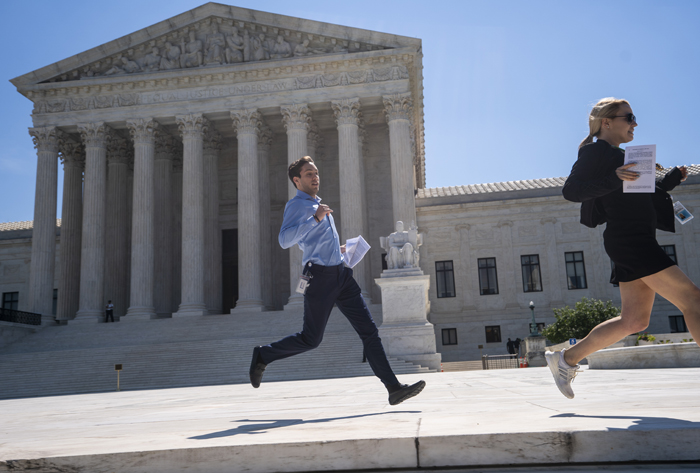 News agency interns sprint across the plaza at the Supreme Court with copies of the justices' final decisions of the term in Washington on Thursday. J. Scott Applewhite/Associated Press

RALEIGH — North Carolina Republicans were satisfied and election advocacy groups were disappointed by a key U.S. Supreme Court ruling Thursday in a case that says federal courts are not the proper venue to consider partisan gerrymandering claims.

The 5-4 decision reversed a lower-court ruling that voided state congressional districts because of excessive partisan bias. It means district lines drawn by the GOP-controlled General Assembly in 2016 for the state’s 13 congressional seats will remain in place for the 2020 elections.

“It is not the judicial branch’s responsibility to determine the (political) winners and losers,” GOP state Rep. David Lewis of Harnett County told reporters after the decision. “This is a complete vindication of our state and or the fair and open process that we ran.”

Lewis is one of the mapmakers who was sued in the case.

The lower court had agreed with Common Cause, the state Democratic Party and voters who sued. A three-judge panel declared in early 2018 that “invidious partisanship” in the plan violated the U.S. Constitution. Partisanship influenced the mapmaking so much that it took power away from voters to choose their favored candidate, the judges found.

The ruling is “a bitter disappointment,” state Common Cause Executive Director Bob Phillips said in a release. “And make no mistake about it, there are victims of this decision. The victims are those North Carolinians who do not have a voice in Washington because a narrow majority of the U.S. Supreme Court has condoned an abusive partisan gerrymander.”

But Phillips said he’s hopeful about other efforts to curb partisan gerrymandering, particularly with another pending lawsuit in state court. The case, filed by Common Cause, state Democrats and others, goes to trial in mid-July. It challenges state House and Senate legislative districts by alleging they violate the state constitution.

Phillips and others point out that Chief Justice John Roberts’ opinion don’t prevent gerrymandering concerns from being addressed by the states. Roberts wrote that other states have passed laws and constitutional amendments setting map standards or ordering maps be created by special commissions. Efforts to pass such commissions in North Carolina have made little headway over the past decade.

When the maps were drawn in February 2016, GOP mapmakers approved criteria that stated one of their goals was to retain their 10-3 advantage within the congressional delegation. At the time, Lewis told colleagues in public he proposed a 10-3 map “because I do not believe it’s possible to draw a map with 11 Republicans and two Democrats.”

Lewis said later he was joking. On Thursday, he said such comments were bracketed around other comments he made highlighting how well the map was made, with few voting precincts and counties split between districts.

The Supreme Court previously allowed the map to be used in the 2018 elections while the case was pending. Republicans currently hold eight of the 13 seats. Three are held by Democrats. Two vacancies will be filled in special elections later this year.

The court’s conservative majority, including the two justices appointed by President Donald Trump, prevailed in a decision delivered on the last day before the justices’ summer break

In the short term, Republicans are the prime beneficiaries of the ruling. They made dramatic political gains in the 2010 election just before the last round of redistricting, so they have controlled the process in many states. Democratic voters had persuaded lower courts to strike down districting plans in Michigan, North Carolina, Ohio and Wisconsin. The one Republican suit came in Maryland, against a single congressional district.

Redistricting will next take place in 2021, once 2020 census results are available.

Chief Justice John Roberts wrote the majority opinion in both cases, siding with the liberals on the census and the conservatives on redistricting. Although the chief justice often seeks broader coalitions for relatively narrow decisions, he ended up writing a sweeping redistricting opinion that drew an impassioned dissent from the liberal justices.

Voters and elected officials should be the arbiters of what is a political dispute, Roberts said in his opinion for the court. Federal courts are the wrong place to settle these disputes, he said.

“We have never struck down a partisan gerrymander as unconstitutional — despite various requests over the past 45 years. The expansion of judicial authority would not be into just any area of controversy but into one of the most intensely partisan aspects of American political life,” Roberts wrote.

“Our conclusion does not condone excessive partisan gerrymandering,” Roberts wrote, acknowledging that the North Carolina and Maryland maps are “highly partisan.”

In a dissent for the four liberals, Justice Elena Kagan wrote, “For the first time ever, this court refuses to remedy a constitutional violation because it thinks the task beyond judicial capabilities.” Kagan, in mournful tones, read a summary of her dissent in court to emphasize her disagreement.

Partisan gerrymandering at its most extreme “amounts to ‘rigging elections,'” Kagan wrote, quoting retired Justice Anthony Kennedy in a case from 2004.

The practice allows politicians to “cherry-pick voters to ensure their re-election,” she wrote.

Advances in technology have allowed mapmakers to draw districts with increasing precision, and advocates of limiting partisan districting have said the problem will grow even worse in the redistricting that follows the 2020 census.

One party can exaggerate and entrench its power, even in states that are otherwise closely divided between Republicans and Democrats.

Federal courts in five states had concluded that redistricting plans put in place under one party’s control could go too far and that there are ways to identify and manage excessively partisan districts. Those courts included 15 federal judges appointed by Republican and Democratic presidents reaching back to Jimmy Carter.

The decision effectively reverses the outcome of rulings in Maryland, Michigan, North Carolina and Ohio, where courts had ordered new maps drawn, and ends proceedings in Wisconsin, where a retrial was supposed to take place this summer after the Supreme Court last year threw out a decision on procedural grounds.