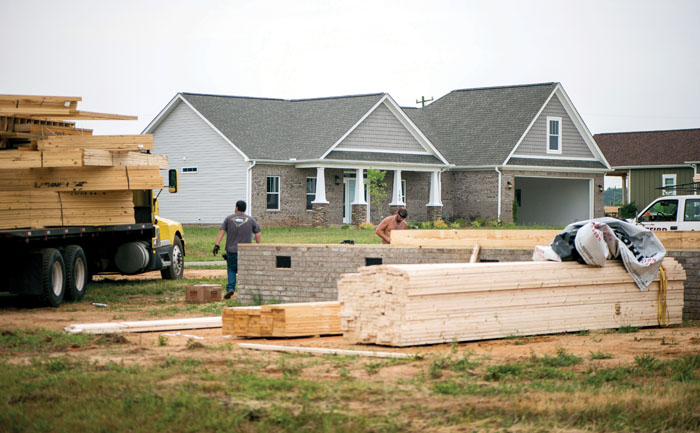 With finished homes as a backdrop, builders prepare to start on a foundation at Barnhardt Meadows, a new subdivision on Patterson Road near China Grove. Jon C. Lakey/Salisbury Post

I was inadvertently misquoted in that article and would like to make some clarifications and additions.

Prior to the new Land Development Ordinance, developers had the ability to design and lay out their developments according to the current standards. It was then approved by Planning Board. Final approval was by the City Council.

Under that ordinance, we were capable of developing subdivisions such as Woodfield, Hidden Creek and Spyglass Hill at Crescent. These neighborhoods do not have sidewalks, but they are extremely popular developments.

There are over 300 homes in these three developments, and there is a waiting list of people who want one when they come on the market. This just shows how great the demand is for these homes. Today we can’t duplicate these developments under the current LDO.

The changes that were made were quite restrictive. When the Land Development Ordinance Committee was formed, we had some builders and developers on the committee. The majority were people outside the development community. It seems that the whole process was a battle between builders and non-builders, who were unfamiliar with the building process.

It was a constant battle to try to keep our ordinance to allow affordable developments and housing. Everyone was willing to make changes to the way things were done, but the resulting rules were far too restrictive.

Since then, there have been no new developments in Salisbury.

You can go to Mooresville, Huntersville, Concord or many other cities where you can still build such developments as those I’ve listed. They are building homes there in the thousands and broadening their tax base.

For us to compete and keep our citizens from relocating to get new housing, we need to adjust our ordinance so local and outside developers can better expand our tax base by providing more new houses.

When revising the ordinance was discussed at a council meeting, Councilman Miller stated, according to the April 21 article, “It’s more logical to buy than to build a house.” Perhaps this is why folks are going to surrounding communities to buy more available new housing.

When the Chewy.com plant opens on Long Ferry Road, we would hope people will move here, but there will not be housing for them. There is already a shortage and no new developments in which to build.

It is time to adjust our ordinance to allow the same criteria that we recently approved for the True Homes development at Drummond Village. Those changes should be “by right” rather than by exception.

People of lower incomes have a better chance of buying a new house while interest rates are at an all time low. We must update our ordinance and we must do it now. It just seems to keep going and going. And it’s going no where.

We hear it mentioned at council meetings, but it never seems to be done. Many of us are prepared to serve on committees to improve our ordinance immediately.

Let’s do it and move our city forward.

Rodney Queen is a realtor in Salisbury.