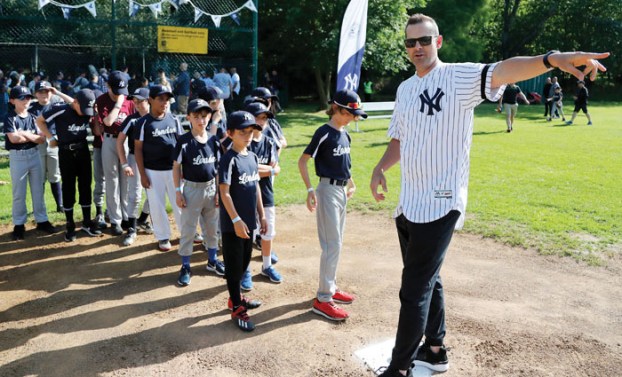 AP Photo/Frank Augstein ... Young fans watch as Yankee manager Aaron Boone instructs, during a private baseball clinic in London on Thursday. The Yankees hosted approximately 100 youth in the London community, in conjunction with the London Meteorites Baseball and Softball Club for the clinic. 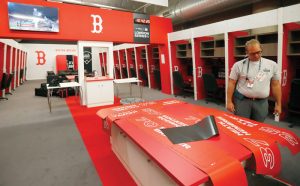 The Boston Red Sox changing Room is prepared during an unveiling of the London Stadium in London, Thursday, June 27, 2019. Major League Baseball (MLB) will make its mark its European debut with the New York Yankees versus Boston Red Sox game at London Stadium this weekend. (AP Photo/Frank Augstein)

No ducks on the pond quite yet — not so soon after flying across it. Having landed in London, the New York Yankees and Boston Red Sox relaxed, saw a few sights and tried to give Major League Baseball some buzz ahead of the first regular season games in Europe this weekend.

“More important than the two games is what continues to happen here in England after we’re gone,” baseball Commissioner Rob Manfred said Thursday at the clinic in north London’s Finchley Park, not far from Tottenham. “It’s programs like this that provide kids with playing opportunities that are so crucial to the growth of our game.”

Mariano Rivera, Reggie Jackson, Alex Rodriguez, Andy Pettitte, Hideki Matsui, Carlos Beltran, Nick Swisher and Aaron Boone worked with players ages 8-15 and then joined Yankees owner Hal Steinbrenner to present a truck of baseball equipment to the London Mets youth club. There was a cloudless sky and the temperature was in the mid-70s on a day when London had no resemblance to its Big Smoke nickname.

“I like the way that it’s different to other sports,” 8-year-old Milo Mandolini said. “I like batting, I find that quite fun.”

In a land dominated by Premier League football — soccer to novices back in the States — baseball wants to make inroads. Olympic Stadium, home of the West Ham soccer club, has been reconfigured for baseball, an artificial turf surface imported and foul poles installed. Red cards have been replaced by lineup cards, rituals on display for young fans to emulate.

“There’s no doubt this country’s about soccer,” Beltran said. “There’s some kids here that they hope and wish one day to become ballplayers.”

Fans will be asked to sing “Sweet Caroline,” just as they do at Fenway Park. A hawker was brought over to train British vendors the skills selling hot dogs and beer. Delaware North is even promoting 2,000-calorie-plus delicacies of Americana priced at 19-24 pounds ($24-$30), one involving 2-foot hot dogs, the other 2 feet of corn chips, and both with jalapenos.

And The Freeze is coming — not the typical British weather but instead the Atlanta Braves between-innings sprinter.

Major League Baseball is billing this as “Old rivalry. New ground.” Many of the regular fans are making the 3,500-mile or so journey. Red Sox season ticket holders purchased an average of 5,831 seats per game and Yankees buyers 4,752 during the presale, ready to mind the gap and take the Jubilee or Central line to the Queen Elizabeth Park rather than the No. 4 to the Bronx or the Green line to Kenmore Square.

Still, the majority of fans will be local. The baseball will vastly outdraw the Cricket World Cup, which includes Australia vs. New Zealand on Saturday at Lords and England vs India on Sunday at Edgbaston in Birmingham.

“We certainly hope to pick up some fans while we’re over there,” said Ron Bumgarner, Boston’s executive vice president of ticketing, events and concerts.

Both teams are taking advantage of British ties. Boston is hosting clients and sponsors of European champion Liverpool, which like the baseball team is owned by Fenway Sports Group. The Yankees learned about the youth baseball organization from Premier League champion Manchester City, the baseball team’s partner in Major League Soccer’s New York City team.

“You’re making this game grow,” Steinbrenner said at the clinic. “You’re getting people interested that maybe thought they wouldn’t be interested in baseball,”

Boone and Red Sox manager Alex Cora had never been to London before — the only European city Boone had visited was Barcelona, Spain. Players are creatures of routine, but Cora had no patience for gripes.

“Someone mentioned it’s a long trip, I said: ‘How about this one? You can be in Double-A right now on a bus ride, bad hotels and bad meals,’” he recalled. “Let’s put everything in perspective. It’s not that bad.”

Managers call the trip a distraction from the season’s monotony. Boone and Cora planned to visit Buckingham Palace before batting practice Friday to watch the changing of the guard. Both teams were due Friday night at the Tower of London — for a party, not imprisonment, though in the days of George Steinbrenner that latter likely would have been threatened for consecutive defeats.

Each player on the trip gets an extra $60,000, according to baseball’s labor contract. That more than covers the ticket cost of “The Making of Harry Potter,” the Yankees’ most-mentioned activity choice. Before he was sent to Triple-A in a roster crunch, Yankees outfielder Clint Frazier said some teammates envisioned a possible lengthier excursion: Paris.