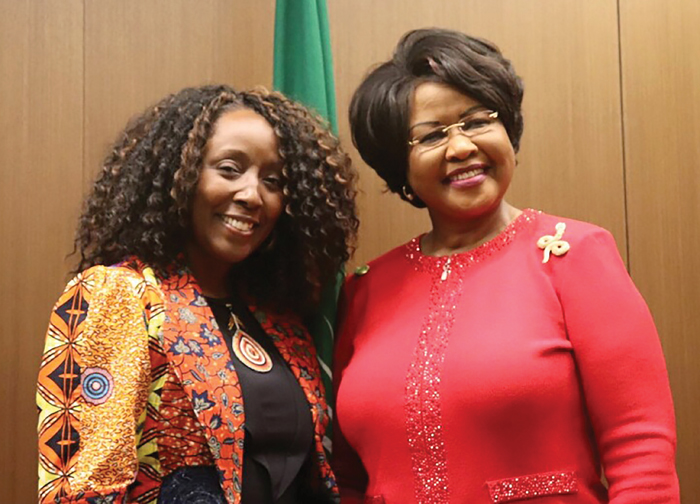 Developed by Kwabena Boateng, founder of the African Diaspora Nation, the HBCU African Homecoming Initiative is designed to be a one-stop clearinghouse to expand education and economic opportunity exchange between Africa and black America. It is providing the platform to connect HBCUs with African colleges and universities for collaboration and sustainability.

The initiative will convene Aug. 1-10 in Ghana, West Africa, during the “Year of Return, Ghana 2019,” which was announced by Ghana’s president last year to observe the 400th anniversary of the Atlantic slave tTrade. It is a call to Africans in the diaspora to unite with their African brothers and sisters.

“President Jenkins has a popular saying on campus: ‘Love is an action word,’” Harrington said in her remarks. “I stand before you today to announce that Livingstone College supports this HBCU Africa Homecoming Initiative and that this affirmation is not without action as our past behavior will serve as an indicator of our future intentions.”

Harrington recounted the efforts underway at Livingstone to strengthen its relationship with African countries. In April, she visited A.M.E. Zion University in Monrovia, Liberia, and met with its interim president, Peter Kamei, and the interim management committee. She toured Zion’s Po River campus, where a 24-classroom building is under construction. As a result of that visit, Livingstone is planning to collaborate with Zion University on a student-teacher exchange program.

Livingstone and Zion University were both founded by the African Methodist Episcopal Zion Church.

In May, Latim Da-Thong, deputy minister for administration for Liberia’s Ministry of Education, was among special guests at Livingstone’s commencement. He met afterward with Jenkins and State Alexander, executive assistant to the president and vice president of communications and public relations, to discuss strengthening the relationship between Livingstone and Liberia’s education institutions as a whole.

Livingstone has an agreement with the Liberian Organization of the Piedmont, based in Winston-Salem, to host two exchange students every four years from Liberia.

“This HBCU Africa Homecoming Initiative could not be more timely because we were already exploring those possibilities,” Jenkins said. “This initiative provides the platform to facilitate those relationships and create a win-win educational ecosystem for HBCUs and African universities.”

Boateng noted the connection between African leaders, such as James Aggrey, to HBCUs. When Aggrey attended Livingstone, he became the first person from Ghana to attend an HBCU. He later became a professor there and then a minister through Hood Theological Seminary.

Global politics is changing; China is competing hard for Africa; and Ghana is calling for the African diaspora to return home for the 400th anniversary of slave trade, Boateng said. “It looks like everything is aligned. … Education is the foundation for this awakening. We need to work hard.”

Arikana Chihombori Quao, African Union ambassador to the United States, delivered opening remarks at the media launch on the need for the African diaspora to unite and form partnerships.

The initiative is also endorsed by the National Association for Equal Opportunity in Higher Education.

“North Carolina has more HBCUs than any other state, so it was also special to be the only one represented,” Harrington said. “This initiative substantiates our historic purpose, reinforces our relevancy today and solidifies our hope for tomorrow.”