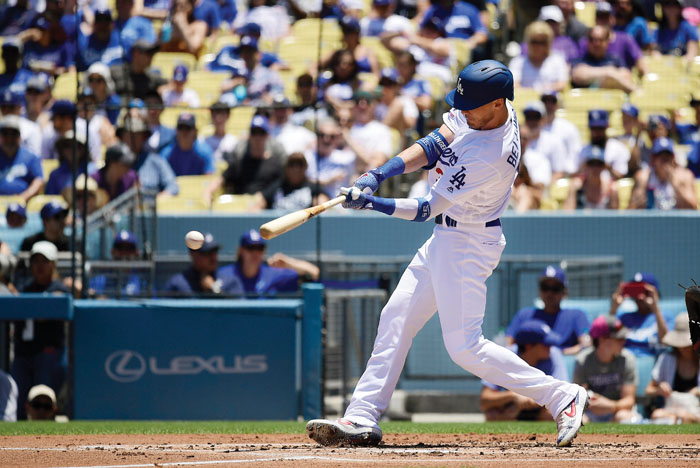 AP Photo/Mark J. Terrill ... Los Angeles Dodgers’ Cody Bellinger puts a ball in play during the first inning of a baseball game against the Colorado Rockies, last Sunday, in Los Angeles. Bellinger will start in the outfield for the National League in this year’s All-Star game, along with Atlanta’s Ronald Acuna Jr. and Milwaukee’s Christian Yelich.

NEW YORK (AP) — Cody Bellinger and Christian Yelich have been elected starters for one of the youngest All-Star Game lineups ever, leading the millennial-heavy National League for the Midsummer Classic in Cleveland.

Major League Baseball revealed the results from fan balloting for its All-Star starters Thursday. The All-Star Game is July 9.

The Dodgers’ Bellinger, Brewers’ Yelich and Braves’ Ronald Acuña Jr. are set to play outfield for the NL, leading a lineup averaging just 25.8 years old. Depending on who is chosen as the club’s designated hitter, the starting position players could be younger than the 1967 NL and 2017 AL clubs, which averaged 26.0 years old.

“I’ve never seen this much young talent in the game,” said Dodgers manager Dave Roberts, who will lead the NL. “There’s a lot of fun players to watch — talented and the personalities from some of these young players.”

Angels star Mike Trout was the leading vote getter in the final round. He’ll be joined on the AL squad by three Astros — Alex Bregman, George Springer and Michael Brantley — and two Yankees — Gary Sánchez and DJ LeMahieu.

“It was quite a wild journey from this year to last year,” Pence said. “And to even be speaking about this now, is a miracle. It’s a blessing, and I’m very grateful.”

The elder statesmen in the NL lineup will be 29-year-old Freddie Freeman from Atlanta and 28-year-old Nolan Arenado of Colorado.

“It shows how good these young guys are,” said Arenado, making his fifth All-Star appearance. “Some of these young players are unbelievable players. We’re fortunate to be in this time, when you get to see how good they are.”

Indians first baseman Carlos Santana was elected to start in his home park in the 33-year-old’s first All-Star selection. He’ll be joined in the lineup by Brantley, a former teammate who left the Indians in free agency last offseason for a $32 million, two-year deal with Houston. Brantley edged Yankees slugger Aaron Judge by 0.9% for the final outfield spot.

The Cubs’ Willson Contreras and Javier Baez will each start for the NL for the second straight year. Baez was elected at shortstop a year after starting at second. Only three other All-Stars have started in consecutive years at different positions.

“I just enjoy going to them,” he said. “Every year it seems like I am slowing it down and embracing the experience. The first couple I was running around and it went so fast.”

Yelich was second in voting behind Trout. He homered in last year’s All-Star Game, then staged a second-half tear that ended in him winning NL MVP. He’s been just as good in 2019, leading the majors with 29 homers while hitting .332 with a 1.149 OPS.

“In spring, there were a lot of questions if I could do it again,” Yelich said. “Was it a fluke? Am I a good player? That stuff kind of lights a fire in me.

“I didn’t know how the year was going to go, but I wasn’t going to look back on last year and think anything was guaranteed. Just because you’re an MVP the previous year, you’re not going to just walk through the next year and everything was going to be fine.”

The league adopted a new balloting structure this season, which operated exclusively through Google. Fans voted up until June 21 to determine finalists for All-Star starters. The top-three vote getters at each position — top nine in the outfield — in each league then entered a second phase of voting, which ran Wednesday and Thursday. Vote totals were reset prior to the final round.

Fans elected the nine starting players for the AL team and eight for the NL — with the extra AL player being the designated hitter. The rest of the 32-man rosters for each league, including the DH for the National League, will be determined by player balloting and selections from the Commissioner’s Office. Those All-Stars will be announced Sunday.

The first All-Star Game was in 1933 in Chicago. All-Star starters have been elected by fans since 1970. Balloting was moved exclusively online in 2015.