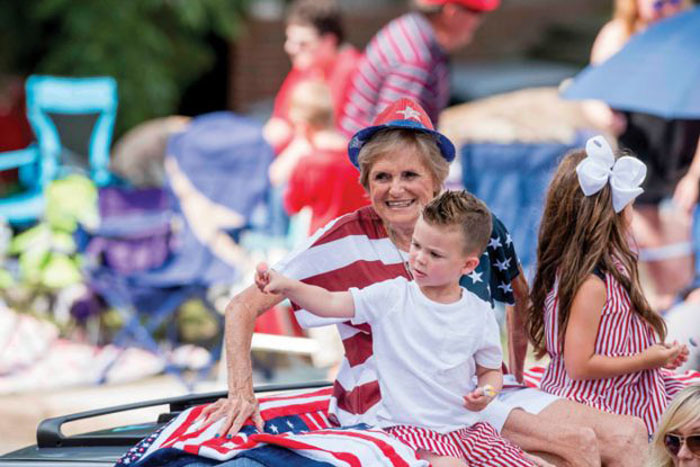 Daisy Bost was the grand marshal of the 2018 Faith Fourth of July parade. She rode with her great-grandchildren, Easton and Mia Spinella. Jon C. Lakey/Salisbury Post file photo

FAITH — The town of Faith has hosted Fourth of July celebrations annually for more than 65 years, and this year will be no different. A street dance was held Saturday to kick off the festivities, and a parade and fireworks on the Fourth will be the culmination of a week full of celebration.

“I don’t know any other thing to do on the Fourth of July,” said Randall Barger.

Four generations of his family have helped organize the celebration, stretching as far back to his grandfather; his parents, who are the grand marshals of the parade this year; and his son, who is working with Barger to line up the parade.

The town has hosted Fourth of July celebrations since 1946, although unofficial celebrations date all the way back to when the town was incorporated in 1903. Old-fashioned activities like a sack race, watermelon-eating contest and egg toss pay tribute to this history.

Some people attend the celebration year after year for the barbecue, hamburgers, country ham and hot dogs. Kevin Cauble, chairman in charge of Faith’s Fourth of July celebrations this year, plans to get to the kitchen at 6 a.m. July 4 to start chopping barbecue shoulders. He estimates that about 75 are sold on the Fourth each year.

A new stage for nightly performances will be a prominent part of the festivities this year. It includes a dressing room and restroom for performers and is handicap-accessible.

“We’re pretty proud of that thing,” Cauble said. “It is a pretty nice stage.”

Faith received a state grant to build the permanent stage, and it will be put to work throughout the week with artists performing on it every evening at 7:30 from Friday through Wednesday, and at 8 p.m. on July 4. The concerts will be staged behind Town Hall.

The line-up for the entertainment includes the Randy Clay Band on Friday; Too Much Sylvia on Saturday; the Entertainers on Sunday; the Embers on Monday; Band of Oz on Tuesday; Jim Quick and Coastline on Wednesday; and Motel Soap at 8 p.m. July 4. Organizers recommend that fans bring chairs.

Food vendors and rides will be featured. They open at 6 p.m. Friday, Monday, Tuesday and Wednesday at Faith American Legion Park. The rides are set to stay open until about 11 each night.

A $25 unlimited ride wristband will be sold, although discounted $18 armbands can be purchased in advance online through today. The armbands are valid on any one day of the celebration from open to close, including all day on the Fourth. They do not include games. Without armbands, rides are typically about $5 each, although they will be $2 each on Tuesday.

On Saturday, a matinee will be held beginning at 1 p.m., and the wristbands will be good all day.

On Sunday, the food booths are rides are scheduled to open at 5 pm following a performance by the Rowan Big Band at 3:30 at Faith Baptist Church. A patriotic program is also scheduled for Sunday at 5 pm.

The celebration is an all-day affair on July Fourth. The rides open at the same time that the parade begins at 10 am on Main Street with grand marshalls Buddy and Sylvia Barger and master of ceremonies Buddy Poole. That will be followed by the flag raising and national anthem by Neil Wilkerson, and the crowning of Miss Rowan County Veteran. Faith idol games will take place at 7 p.m., along with the races games, watermelon eating contest and egg toss at the Faith School ballpark.

After Motel Soap performs at 8 pm, a hot dog eating contest will take place a 9:30. Finally, fireworks at the Faith School Ballpark will end the day at 10:30 pm.