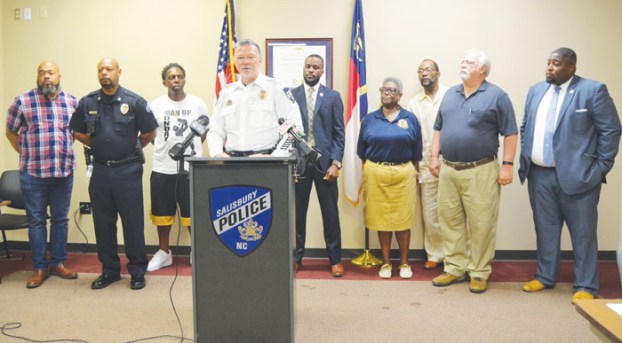 Salisbury Police Chief Jerry Stokes speaks about a collaboration with the NAACP that will employ community partners like those who stand behind him to act as interrupters who could potentially de-escalate violence in a community before it happens. Shavonne Walker/Salisbury Post

Darts and laurels: Program can be part of holistic approach

Laurel to a partnership between the Salisbury Police Department and the local NAACP this summer to “interrupt crime.”

The program has components that include detecting the interruption, identifying and treating it as well as mobilizing people.

We think the program is a good part of a multi-pronged approach to reducing some incidents of crime in our city. As organizers and law enforcement likely realize, other critical components of a holistic approach to combating crime includes programs that provide mentors for children without them and good jobs, which provide stability for families.

Nightcrawlers, which has patrolled the streets at night armed with joyful songs and fervent prayers, as well as the combination of Gemstones and COMPASS, affiliated mentorship programs for at-risk boys and girls, are good examples of programs that have made a difference.

Dart to the quick alterations of a bill in the legislature to provide East Spencer and China Grove with the ability to exceed a 10% cap on voluntary satellite annexations.

East Spencer’s removal from a bill that appears primed for passage effectively leaves it without one tool for growth.

We hope the town and volunteer fire departments nearby will discuss concerns at length so that a similar bill can be reintroduced in a later legislative session.

The local company is brining four, 800- to- 850-square-foot flats to the intersection of Innes and Lee streets. And as project manager Ben Fisher said, street-level apartments haven’t existed in downtown Salisbury.

More downtown residents will bolster the vitality of our city’s core. We hope downtown will see the development of more residential space and an increase in the diversity of offerings, too.

What does our community want itself to become? With Interstate 85 widening nearing completion, Rowan County has been asking itself... read more