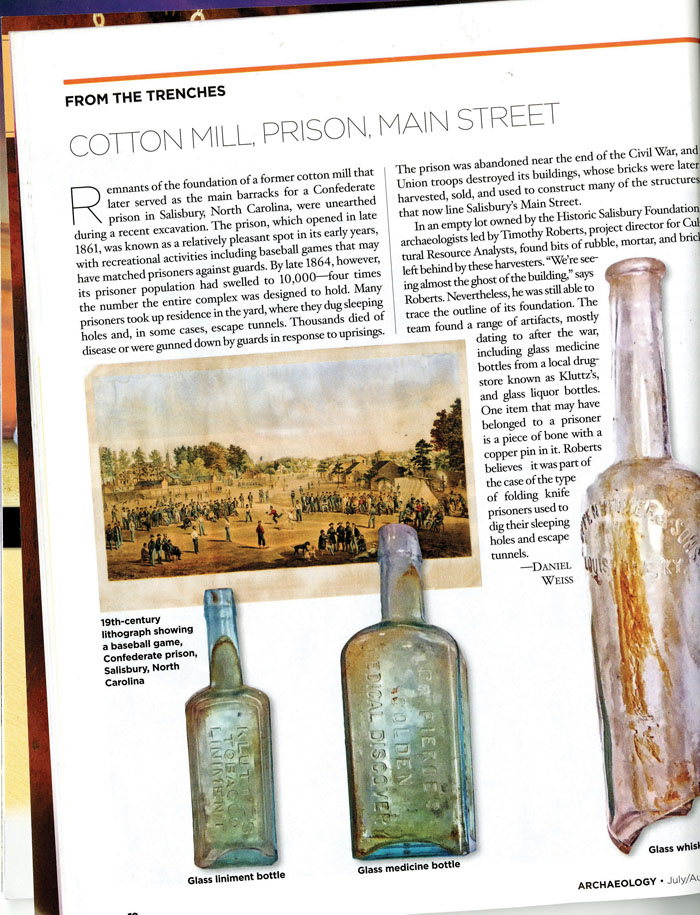 In its July/August issue, Archaeology magazine has this story about a recent dig conducted in relation to the Salisbury Confederate Prison site.

On Page 18, senior editor Daniel Weiss writes about the archaeological dig related to the Salisbury Confederate Prison that was conducted last November by Cultural Resource Analysts of Richmond, Virginia.

The excavation was led by project director Timothy Roberts, who reported on his company’s findings at a March program hosted by Historic Salisbury Foundation.

The limited diggings were on a lot at 313 E. Bank St. Historic Salisbury Foundation owns the property, and a $10,000 National Parks Service grant and $7,500 from the foundation went toward the dig.

The aim of the excavation was to substantiate what ground-penetrating radar had possibly revealed in 2016 — that the back of the property was home to a portico of the cotton mill that served as the prison.

Roberts confirmed that the dense concentration of brick, mortar and stone indicated a corner or edge of the prison structure. The configuration of a “robber trench” still remaining supported the findings of the previous ground-penetrating radar study, that part of the old cotton mill definitely was on that site.

Weiss, the senior editor, continued, “The team found a range of artifacts, mostly dating to after the war, including glass medicine bottles from a local drugstore known as Kluttz’s, and glass liquor bottles.

“One item that may have belonged to a prisoner is a piece of bone with a copper pin in it.”

Weiss wrote that Roberts believed it to be part of the case “of the type of folding knife prisoners used to dig their sleeping holes and escape tunnels.”

Weiss included brief notes on the history of the prison, which held Union captives in 1861. It started out big enough to accommodate as many as 2,500 prisoners, but by 1864 conditions had worsened considerably because it was thousands over capacity.

Disease and starvation led to thousands of deaths, prisoner uprisings and killings, and numerous attempts to escape.

Most all the prisoners were transferred out in February 1865, just a couple of months before troops led by Union Gen. George Stoneman came to Salisbury and burned the prison.

Illustrations with the Archaeology magazine article include a lithograph showing a baseball game on the prison grounds when conditions were not so terrible. It also has three images of glass bottles recovered during the dig.

Historians know the portico to have existed from drawings made of the mill building and Confederate prison site, especially illustrations sketched by Union prisoner Robert Knox Sneden in late February 1864.

The expansive prison site spread east of the railroad tracks on both sides of today’s East Bank Street.