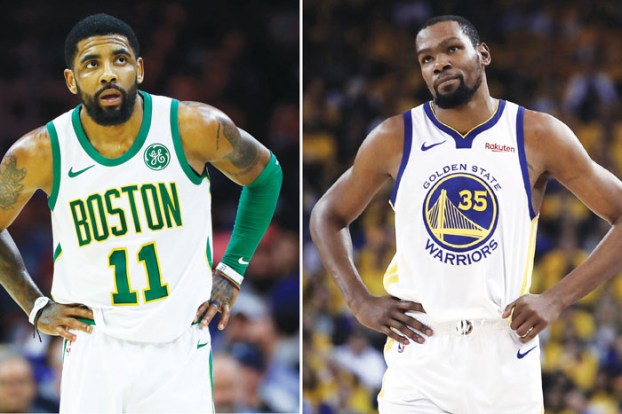 FILE - At left, in a March 20, 2019, file photo, Boston Celtics' Kyrie Irving is shown during an NBA basketball game against the Philadelphia 76ers in Philadelphia. At right, in a May 8, 2019, file photo, Golden State Warriors' Kevin Durant is shown during the first half of Game 5 of the team's second-round NBA basketball playoff series against the Houston Rockets in Oakland, Calif. Rarely relevant at the same time on the basketball court, the Knicks and Nets are front and center in the free agency race, two of the teams best positioned to make a splash when the market opens. Both can afford two top players, with hopes of landing not only a Kevin Durant or Kyrie Irving, but possibly even both. (AP Photo/File) 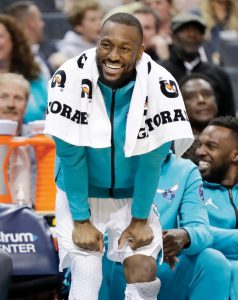 AP Photo/Chuck Burton, File … In this file photo from March 26, Charlotte Hornets’ Kemba Walker laughs at a play from the bench during an NBA game against San Antonio. The three-time All-Star point guard is a free agent and reports have him possibly heading to the Boston Celtics.

NEW YORK (AP) — It’s been seven years since the Nets crossed the Hudson River and took up residence in the Knicks’ city.

Rarely relevant at the same time on the basketball court, the Knicks and Nets are front and center in the free agency race, two of the teams best positioned to make a splash when the market opens.

Both can afford two top players, with hopes of landing not only a Kevin Durant or Kyrie Irving, but possibly both. New York, home of the worst team in the NBA in two of the last seasons, could be the epicenter of the league in early July.

After years of bad play, bad trades and often bad basketball, at least one team in the city could look really good in a few days.

Brooklyn is feeling good about its chances of winning it. Having recovered from an ill-fated trade with Boston in 2013 that cost the Nets years of high draft picks, Brooklyn has constructed a team that surprisingly made the playoffs. Even if it lets D’Angelo Russell go after an All-Star season to pursue bigger fish, there are young core pieces such as Caris LeVert, Jarrett Allen, Spencer Dinwiddie and Joe Harris, along with a player-friendly style under Kenny Atkinson that should be attractive to many players.

Forced to build slowly and small for years, the Nets appear ready to make a big move. A trade with Atlanta to shed Allen Crabbe’s $18.5 million contract for next season left the Nets in position to go for two top players, without having to gut a promising roster to do so. Throw in a well-regarded medical staff and a recently built training center with nice views of Manhattan, and the Nets have plenty to sell.

They believe someone will want to buy.

“All I can say is a team like Brooklyn, when they look at us from afar, I think we’ve got to give them some credit. Because the guys that are free agents, all of them I would assume have spent the last year or two surveying the league,” Nets general manager Sean Marks said. “I mean, they know where they want to go. They know what they want to be a part of. I think our young guys have done a nice job to put themselves in that position.”

The Knicks were first to signal their plans to look to free agency. During a 17-65 season — the worst in the NBA — they traded star Kristaps Porzingis to Dallas. The deal also allowed them to move the contracts of Tim Hardaway Jr. and Courtney Lee, clearing nearly $70 million. The Knicks can easily be positioned to offer two max deals.

Now, they have to see if anyone wants them.

The allure of Madison Square Garden hasn’t proven to be enough, not with the years of bad play and bad press under owner James Dolan and a series of front-office executives. The current leadership of president Steve Mills, general manager Scott Perry and coach David Fizdale hoped landing Zion Williamson would be the first step to a big summer and help interest free agents, but the lottery put them third instead of first — though they were happy to get RJ Barrett.

At the news conference to introduce Barrett last week, the Knicks didn’t exactly tell their fans to prepare for big news.

“I think we’re asking them to continue to be patient,” Mills said. “We laid out a plan when Scott came on board and then David joined us that we were going to build this team the right way. We were going to draft well and we were going to be diligent about how we built this team and not take any short cuts, and not follow a path.”

Their path could lead them in plenty of successful directions, even if they miss out on the biggest targets. There is still a wide range of All-Star players below the top tier — including Jimmy Butler, Kemba Walker, Tobias Harris and Al Horford. If the Knicks can’t or won’t get any of them, there would be plenty of cap space and future first-round picks available to use in trades.

But the easiest way to make a leap is with a quick strike or two next week, and the fact that both teams can make one has the Big Apple buzzing. There was hope that a rivalry could be created when the Nets moved from New Jersey in 2012, but even with stars such as Carmelo Anthony and Amare Stoudemire in New York, and Paul Pierce, Kevin Garnett and Deron Williams in Brooklyn, it never really took off before both teams crashed.

Now appears to be the time.

By Matt Carlson Associated Press CHICAGO (AP) — Craig Kimbrel dodged trouble for a save in his season debut when... read more