White Sox rally as Boston pitching blows another save 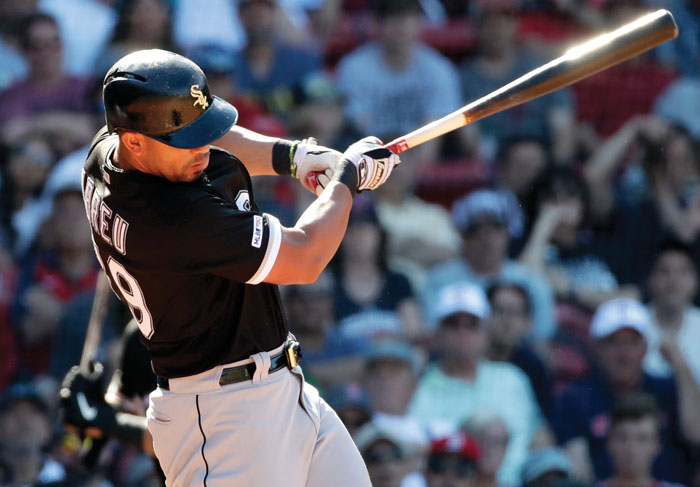 BOSTON (AP) — Boston starter Chris Sale won’t mind getting just about as far away from Fenway Park as he can.

The Red Sox left-hander had yet another rough start at home against the Chicago White Sox on Wednesday, and by the time he returns it will be an entire year since he last won a regular-season game in Boston.

“For some reason, I suck here,” he said before the ballclub left for London for a two-game series against the New York Yankees. “I don’t know what it is.”

José Abreu hit a two-run homer over the Green Monster in the ninth inning — his third hit of the game — and Chicago recovered after blowing the lead in the eighth to beat Boston 8-7. Abreu had four RBIs, and Leury García also had three hits for Chicago.

James McCann had an RBI single and added a solo home run against Sale as Chicago pounced on the Boston starter for five runs in the first three innings. In all, Sale allowed six hits and a walk, hitting two batters and striking out 10 against his former team.

Chicago had leads of 3-0, 5-2 and 6-4 before the Red Sox scored three in the eighth to take a 7-6 lead and hand White Sox closer Alex Colomé (3-1) his first blown save in 17 opportunities. But Matt Barnes (3-3) gave up three straight hits in the top of the ninth — García was caught stealing — including Abreu’s 19th homer of the season.

“When they took the lead, we didn’t feel down,” Abreu said through an interpreter. “We kept our head up and we kept fighting until the end.”

Sale, who allowed six of the first seven batters to reach safely, retired the last 10 he faced, striking out the side in the sixth. He avoided the loss when Xander Bogaerts hit a two-run single in a three-run eighth inning to make it 7-6 — Boston’s only lead of the game.

Rafael Devers, who went 4-for-4 on Tuesday night, had three more hits and scored three times for Boston. J.D. Martinez hit a two-run homer and also had an RBI double for the Red Sox.

After blowing the save in the eighth, Colomé walked Jackie Bradley Jr. to lead off the ninth and then retired the next three batters to end it.

“He’s not a guy that lets it bother him,” Chicago manager Rick Renteria said.

Didi Gregorius and DJ LeMahieu connected as the Yankees extended their major league record to 29 straight games with a home run. The AL East leaders overcame two homers and a double by Lourdes Gurriel Jr., plus an early 5-0 deficit, to finish a power-packed 9-1 homestand.

Now, they’ll head straight from Yankee Stadium to England, where they’ll enjoy two days off before playing the Boston Red Sox at London Stadium on Saturday and Sunday in the first major league games in Europe.

Zack Britton wasn’t so great in giving up Cavan Biggio’s RBI single in the ninth that made it 7-all. But Britton (3-1) wound up with the win to close out a three-game sweep.

Gregorius got an infield hit off Nick Kingham (3-2) with one out in the ninth, Aaron Hicks walked and Torres followed with his hit.

Bauer (6-6) had the 23rd double-figure strikeout game of his career and his fourth this season. The right-hander gave up one run and didn’t allow a hit until rookie Humberto Arteaga singled with two outs in the fifth.

Bauer matched a career high by throwing 127 pitches and held the Royals to three hits.

Jake Bauers and Tyler Naquin homered off Jakob Junis in the fourth.

Lucas Duda homered in the ninth for Kansas City off Nick Wittgren.

It marked the 10th time this season that Baltimore yielded at least five home runs. Bundy gave up two of them and now has allowed 19 homers in 16 starts.

Jonathan Villar and Pedro Severino homered for the Orioles, who have lost 13 of 14. Baltimore owns the worst record in the majors (22-58) and the worst at home (9-30).

SAN FRANCISCO (AP) — David Dahl hit a go-ahead grand slam in the third and drove in a career-high five runs to lead Colorado.

Dahl connected off Jeff Samardzija for his second career grand slam, with the other coming last Sept. 10 against Arizona. It marked the first grand slam ever hit by a Rockies player in San Francisco.

Dahl added an RBI single in the seventh. He had a two-run shot in the series opener.

The big swing in the series finale backed German Márquez (8-3), who immediately surrendered Pablo Sandoval’s homer the next inning but won his second straight decision. Márquezallowed three runs and seven hits, struck out two and walked two over five innings. Wade Davis finished for his 11th save.

Samardzija (4-7) was tagged for five runs and three hits in five innings.

PHOENIX (AP) — Eduardo Escobar’s three-run home gave Arizona a four-run lead before Los Angeles recorded an out, and the Diamondbacks cruised to the win.

The Dodgers, with the best record in the majors at 55-27, lost for just the second time — both to Arizona in the three-game series — in nine games, while Arizona finished a nine-game homestand 3-6.

Jarrod Dyson had three hits, an RBI and swiped two bases to raise his NL-leading total to 19. He also had a home run-stealing catch over the right-center field fence.

The Dodgers’ Cody Bellinger hit his 26th home run of the season, tying him for for fourth-most before the All-Star break in franchise history.

The Diamondbacks roughed up Tony Gonsolin (0-1) right away in his major league debut.

Gonsolin got his first major league hit in his first career at-bat in the thirdn eight starts at Triple-A Reno.

PHILADELPHIA (AP) — Jay Bruce ripped an RBI double in the bottom of the 10th inning against his former team, and the Philadelphia Phillies rallied to beat the reeling New York Mets 5-4 Wednesday night.

Mets lefty Jason Vargas tied a career high with 10 strikeouts in his first start since being fined for an expletive-filled confrontation with a reporter, but was pulled after only 77 pitches and the Phillies overcame a 4-0 deficit against New York’s leaky bullpen.

Rhys Hoskins drew a walk from Stephen Nogosek (0-1), and J.T. Realmuto singled. Roman Quinn ran for Hoskins and Bruce, traded by the Mets twice in the last two years, sent a long drive over center fielder Juan Lagares’ head to give Philadelphia its third straight win over New York after a seven-game losing streak.

Vargas baffled hitters with his assortment of off-speed pitches, allowing two runs and three hits in 6 1/3 innings. But he exited after Realmuto doubled to start the seventh and Bruce flied out to deep center. Cesar Hernandez greeted Seth Lugo with a ground-rule double into Philadelphia’s bullpen, cutting the deficit to 4-2. Pinch-hitter Brad Miller walked with two outs and Scott Kingery reached on a wild pitch after striking out swinging.

Jean Segura then hit a tying, two-run single to right-center.

Dominic Smith and Jeff McNeil hit solo homers for the Mets, who have lost four in a row.

Vargas had to be restrained from going after a Newsday beat writer in the team’s clubhouse following a loss at Wrigley Field on Sunday. He called it “an unfortunate distraction” but hasn’t answered questions since the altercation.

Segura hit a solo homer off Vargas in the sixth after he retired 11 straight batters.

Philadelphia’s Nick Pivetta gave up four runs and nine hits in 5 2/3 innings. He has a 4.30 ERA in six starts since a brief demotion to Triple-A.

Smith gave the Mets a 1-0 lead in the fourth on his seventh homer and third in three games. He drove a 1-1 pitch the opposite way into the left field seats. McNeil led off the fifth with an opposite-field shot to left-center to make it 2-0.

The Mets chased Pivetta with two runs in the sixth. Tomas Nido lined an RBI single and McNeil drove in a run with a double.

The Mets selected right-hander Chris Mazza’s contract from Triple-A Syracuse. He was 3-5 with a 3.59 ERA over 12 starts in the minors. RHP Walker Lockett was optioned to Syracuse and left-hander LHP Ryan O’Rourke was designated for assignment.

Mets: RHP Noah Syndergaard is expected to return from the injured list and start Sunday night against Atlanta after striking out nine in a rehab start for Class A Brooklyn on Tuesday. He has been out with a strained right hamstring.

Phillies: RHP Tommy Hunter could join the bullpen in Miami this weekend after one more rehab appearance. He has been sidelined all season with an elbow injury.