Legion baseball: Rowan lets a big one get away 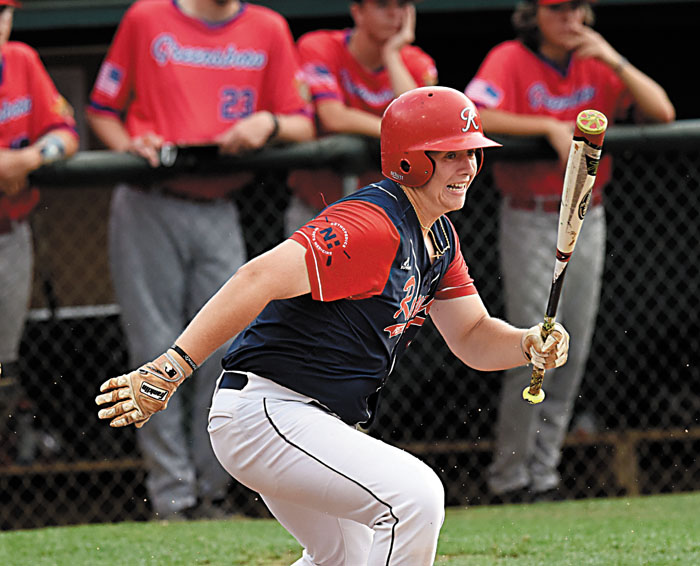 Wayne Hinshaw file photo/for the Salisbury Post ... Rowan’s Bo Rusher, shown during an earlier game this season, smacked a home run on Tuesday night against Concord, but it wasn’t enought, as the locals fell in the American Legion game, 4-3.

MOUNT PLEASANT — Rowan County’s American Legion baseball team had all numerous opportunities to win at Concord on Tuesday — but didn’t.

Rowan hitters left the bases loaded twice and stranded 12 baserunners in a 4-3 setback.

Rowan fielders made three miscues.  Rowan got good enough pitching to win from starter Daniel Durham and reliever Cole Hales, but the errors and the failure to produce timely hits proved costly.

It was a huge victory for Concord Post 51, which is a modest 8-8 overall, but 3-0 in the Southern Division of Area III.

Rowan still has a solid overall record (19-8), but is 4-3 in divisional games, with losses to Mocksville, Mooresville and now Concord.  Rowan is on the road tonight at Kannapolis. Concord visits Newman Park on Friday.

Rowan took a 1-0 lead in the second inning when Hales singled home Jordan Goodine. Rowan had three hits in that inning and Concord contributed its only error, but Rowan was still only able to score one run. Parker got two strikeouts in the inning, and Bo Rusher flied out to end it with the bases full.

Concord tied it in the bottom of the second when Parker singled, Evan McGee doubled him to third, and Adam Wilkerson lifted a sacrifice fly.

Parker smacked a tie-breaking homer to lead off the bottom of the fourth. McGee whacked his second double and scored on a throwing error to give Concord a 3-1 lead.

Rusher, who started at third base with Hales at shortstop, smashed his fourth homer of the summer to lead off the fifth to cut Concord’s advantage to 3-2.

The top of the sixth provided serious frustration for Rowan, which got only one run out of a single, three walks, a wild pitch and a sacrifice fly. Hales hit the sacrifice fly for a 3-all tie. With the bases loaded and two out, Rowan slugger Luke Barringer drove a delivery by Swan hard, but Concord left fielder Larken Lancaster made the catch.

Concord scored the winning run in the bottom of the sixth. Hales was saddled with the loss, although not much of what happened was his fault.

Hales got Parker to pop up to start the inning. He struck out McGee swinging, but catcher JT Fecteau couldn’t glove the ball, and McGee reached first base safely. Wilkerson singled through the left side to move McGee to second. McGee scored from there on an error on a ground ball.

Rowan’s top of the seventh against Swan was eventful. Goodine walked to start the inning, but was thrown out trying to steal second.

With two men out, CP Pyle walked. Chandler Lippard, on the mend from a hamstring injury, pinch hit, his first appearance in some time, and stroked a solid single to put two men on. Rowan tried another pinch-hitter Daniel Sell, but Swan got him out to end the ballgame.