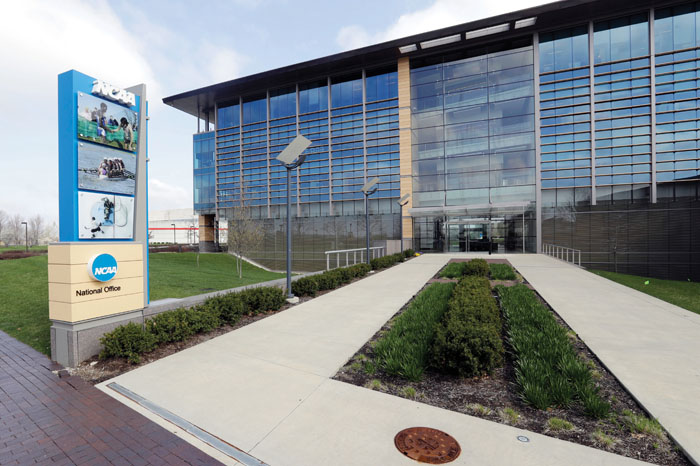 FILE - This is an April 25, 2018, file photo showing NCAA headquarters in Indianapolis. The NCAA has adjusted some of the guidelines used to determine transfer waiver cases, attempting to clarify requirements in response to complaints of ambiguity in the process of requesting immediate eligibility for an athlete switching schools. The adjustments approved by the Division I council Wednesday, June 26, 2019, will require schools requesting a waiver for an incoming transfer to provide more documentation to support a case and more detailed verification of an athlete’s claims from the original school. (AP Photo/Darron Cummings, File)

More than one-third of college athletic trainers say coaches influence the hiring and firing of their schools’ sports-medicine staffs, a finding that counters an NCAA-recommended protocol urging medical staff to make decisions about athlete health independent of coaches and administrators.

Among the 1,796 athletic trainers who answered a recent survey, more than 48 percent said their school was not following the NCAA-directed guidance . Nearly one in five respondents said a coach had played an athlete who had been deemed medically ineligible to participate.

The National Athletic Trainers’ Association sent survey questions to more than 9,200 athletic trainers who work in all divisions of NCAA, NAIA and two-year schools in an attempt to generate baseline data about how institutions are following NCAA guidelines. About 775 of the 1,796 respondents said they worked in Division I.

The crux of the guidelines call for coaches and administrators to be left out of the decision-making process when it comes to an athlete’s health.

But those who answered the survey painted a picture that shows those guidelines are far from being met — and portrayed coaches as still having an influence on who runs the programs’ medical staffs.

“When a coach comes to an institution and maybe gets rid of, fires, or replaces a sports medicine staff in place that’s doing quality work, is that right thing to do?” said Kansas director of sports medicine Murphy Grant, who chaired the committee that conducted the survey. “The institution’s role is to take care of the student-athlete. We want to look at the influence of why those things occur.”

—Nearly three in 10 said the autonomy of medical staff differed depending on sport.

—Just short of half the athletic trainers said there was no formal document describing their school’s model regarding independence of the medical staff.

—More than 76 percent of respondents said they feel they have unchallengeable authority to determine medical management of athletes.

“It’s concerning that 24 percent feel they do not,” Grant said.

Following fresh concerns about the handling of athletes switching schools, the NCAA approved several adjustments Wednesday to the guidelines used to determine when waivers can be granted to transfers seeking immediate eligibility to play.

The adjustments approved by the Division I council will require schools requesting a waiver for an incoming transfer to provide more documentation to support the argument — and more detailed verification of athletes’ claims about why they are leaving the original school.

“The overall goal of these adjustments was to provide the membership with as much information and knowledge and education as to what they need to be including in their waiver requests,” said Brandy Hataway, NCAA director of academic and membership affairs. “I don’t know if I’d say it’s extra (information).  A lot of it is information that was already being requested in the process. It’s just now letting schools know on the front end rather than them submitting their requests and staff going back to them and saying we need x, y,  z.”

The move comes 14 months after a directive helped clear the way for immediate eligibility for all approved requests. Previously, the legislative relief available to athletes requesting a transfer waiver was a sixth year of eligibility. Only in cases where the student was a victim of egregious behavior by a school could immediate eligibility be granted.

Since the change, high-profile cases involving quarterbacks Shea Patterson of Michigan and Justin Fields of Ohio State have been decided in favor of the players. But the overall rate of approval of waiver requests during that time has been about the same as previous years.

What has gone up significantly is the number of waiver requests.

Attorney Tom Mars, who has worked on waivers for Patterson, Fields and other college athletes, said “massive, widespread confusion” about why waivers are granted has caused the uptick in requests. He said he gets two or three calls and email a day from parents and head coaches seeking assistance.

“More often than not, the parents and coaches asking for my help have already convinced themselves that the student-athlete they want me to represent should get a waiver just because some other player they read about was given one,” Mars told AP in an email.

“On top of that, some head coaches have been putting undue pressure on their compliance staff to pursue waiver requests that don’t stand a chance of being granted.”

The waiver process affects football and basketball players more often because those sports do not allow students to transfer without having to sit out a season at their new school. In most of the so-called Olympic sports, athletes are allowed to use a one-time exception to the so-called year-in-residence rule and play right away.

The year-in-residence rule was debated and examined anew by college sports administrators in 2017 and ‘18. A package of transfer rules reforms passed last year by the NCAA — separate from the change to the waiver process — left the status quo in place. Sitting out a season was still required for most transfers in high-profile sports.

Changing the waiver rules to allow the opportunity for more athletes to become immediately eligible seemed like a compromise move, but it has only led to more complaints about how the waivers are granted. There was recent criticism of the NCAA after the denial of a waiver to Illinois tight end Luke Ford, who says he transferred from Georgia to be closer to home because of ailing grandparents.

The latest changes focus on the four guidelines (out of 13) most frequently cited in waiver cases: Claims of athletes being run off a team by a coach; claims of egregious behavior by the original school; injured or ill immediate family member; and injury or illness to the athlete.

The changes could lead to fewer requests being granted since it appears to raise the bar on what is required by a school to make a case for immediate eligibility for an athlete. Hataway said the measure approved by the council was not meant to curb the number of approvals and a review of the guidelines is annually done by the committee.

“Most of what’s in here is what was already being done,” she said. “It’s just putting it in writing so that way the members would have better clarification on the front end.”