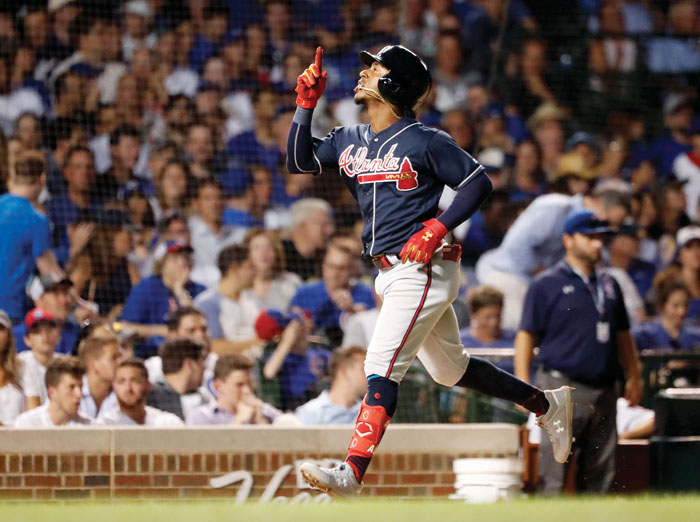 By MATT CARLSON Associated Press
CHICAGO (AP) — Ozzie Albies and Ronald Acuña Jr. homered, Max Fried pitched six innings of two-hit ball and the Atlanta Braves beat the Chicago Cubs 3-2 Tuesday night.
Acuña crushed the first pitch of the game from Cubs rookie Adbert Alzolay into the left-field bleachers for his 19th homer of the season. Albies hit a towering two-run shot to right center off Mike Montgomery (1-2) in the seventh that gave Atlanta the lead.
Fried (9-3) got the win in the second of a four-game set between the NL division leaders. The 25-year-old left-hander struck out eight, walked a season-high five and allowed two runs in winning his second straight start.
Relievers Sean Newcomb, Anthony Swarzak and Luke Jackson, who threw a perfect ninth for his 12th save, combined to complete the four-hitter. Newcomb pitched one-plus inning in his first game since being hit in the head by a line drive 10 days ago.
Willson Contreras had two RBIs and fellow Venezuelan Alzolay tossed one-hit, one-run ball through 4 2/3 innings in his first major league start.
After Acuña launched Alzolay’s fastball just short of the left-field video board for a quick 1-0 Atlanta lead, the 24-year-old right-hander retired 12 of the next 13 Braves batters. He was replaced by Montgomery after walking the bases loaded in the fifth and the Cubs leading 2-1.
Alzolay tossed four innings of one-hit relief in his major league debut last Thursday and got the win.
Fried walked three in the second to load the bases with one out, but poor Cubs baserunning led to a rally killing double play.
Catcher Brian McCann caught Javier Baez flatfooted about 25 feet down the third base line and fired to Josh Donaldson, who tagged Baez for the second out. Donaldson threw to Dansby Swanson, who tagged out Contreras as he tried to advance to third.
Contreras made amends in the fourth with a double down the left field line that extended his hitting streak to nine games and put Chicago ahead 2-1.
Charlie Culberson made a sliding catch in left-center to rob Baez of a hit in the ninth.
KIMBREL COUNTDOWN
Closer Craig Kimbrel was slated to pitch at Triple-A Iowa on Tuesday night, then Cubs management planned to evaluate his progress. The right-hander, who finalized a three-year $43 million deal with the Cubs on June 7, could be activated this week.
TRAINER’S ROOM
Braves: Returned LHP Newcomb from his rehab assignment and reinstated him from the seven-day concussion IL. RHP Chad Sobotka was optioned to Triple-A Gwinnett to make room on the roster. Newcomb was hit in the back of the head by J.T. Realmuto’s liner in start against Philadelphia on June 15. … Rookie RHP Mike Soroka (right forearm) played catch on Tuesday after being hit by a pitch in Washington on Sunday. Manager Brian Snitker said Soroka could throw off the mound on Wednesday.
UP NEXT
LHP Dallas Keuchel (0-1, 5.40) makes his second start for the Braves and faces Chicago RHP Yu Darvish (2-3, 4.75) on Wednesday night. Keuchel, who signed a one-year, $13 million contract with Atlanta on June 7, labored through five innings and lost in his Braves debut at Washington last Friday. Darvish has no-decisions in his last 10 starts and has yet to win at Wrigley Field as a Cub.