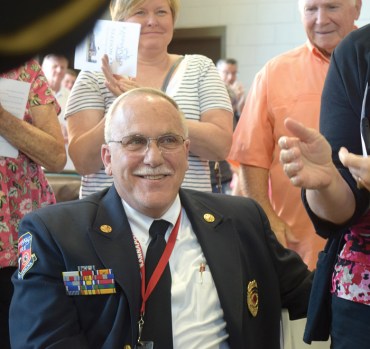 Submitted photo Retiring Kannapolis Fire Chief Ernie Hiers smiles during a round of applause for him. 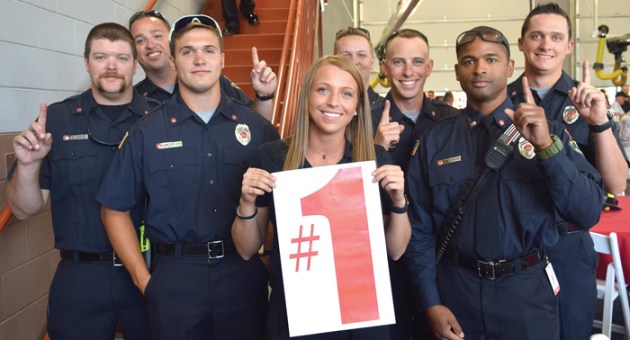 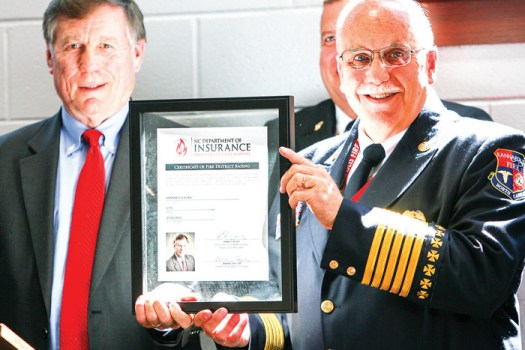 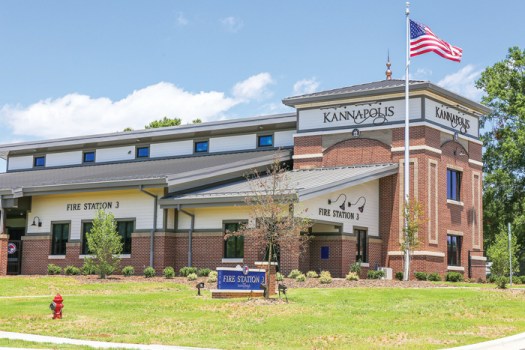 KANNAPOLIS — Kannapolis Fire Chief Ernie Hiers is retiring after 39 years of service, more than 10 of which were spent in Kannapolis.

The Fire Department also announced that it received a No. 1 fire insurance rating and held a dedication for a new fire station.

The No. 1 is the best possible rating for fire insurance. The lower rating means that retail, commercial and industrial businesses will have lower fire insurance costs because insurance rates are set using the rating system.

The Insurance Services Office rating is based on three major components: the Fire Department, water supply and emergency communications. Specific ratings include the number of engine and ladder companies, fire personnel and equipment. Water system evaluation includes the number of fire hydrants, water pressure and flow of water. Community risk reduction benchmarks such as fire prevention, education and investigation efforts are also helpful to the city’s rating.

State Insurance Commissioner Mike Causey made a surprise visit for the opening of Fire Station No. 3.

“This is a remarkable feat. Only 10 other departments in North Carolina and only 63 across the nation have been able to achieve this distinction, and to go from a Class 4 rating to a Class 1 rating is unheard of,” Causey said. “The city and all of you should be commended for your hard work to make this happen.”

Hiers was 21 years old when he joined the Fire Department in Temple Terrace, Florida. He earned his bachelor’s degree in fire and safety engineering technology from the University of Cincinnati and a master’s degree in public administration from City University in Bellevue, Washington. He joined the Kannapolis department as the second full-time fire chief and emergency management coordinator in 2007 after 27 years of service at Temple Terrace Department in Florida.

“I never said I wanted to be a chief someday — it just happened,” he said. “I enjoyed taking on leadership responsibilities such as the budget and new technology and one thing led to another.”

Hiers’ career in Kannapolis has included overseeing growth in the number of firefighters per shift, from 33 to 84 firefighters; a transition from both paid and volunteer positions to an all-paid staff; a 911 system; emergency management plans; a reverse 911 system; computers in trucks; upgraded radio communications for the region; and thermal imaging systems.

The department has received grants for a Knox Box system for the elderly and disabled and smoke alarms for anyone who requests them; offers an outreach program for the hard of hearing and other special populations to teach them fire prevention and first aid; and initiated a Fire Explorer program to encourage teenagers who are interested in a firefighting career.

Most important, Hiers has overseen the planning for fire stations and the construction of two replacement stations, No. 2 and No. 3. He has also worked to improve the insurance rating.

“Not a week goes by that another department doesn’t call and want to know how we do things here, whether it is training and professional development or our community programs,” Hiers said. “I am also proud of the relationships our department has with all of our co-workers in the city and our mutual-aid relationships with our neighboring fire departments, such as the city of Concord.”

Hiers plans to travel more with his wife, enjoy time with their family and indulge in his hobby of as a master judge for the Kansas City Barbeque Society.

Division Chief Rich Barnhardt has been named interim fire chief, but Hiers was on hand to help dedicate Fire Station No. 3 before retiring. The Kannapolis Fire Department dedicated Fire Station No. 3 on Friday with a firehose uncoupling ceremony and tours of the facility on Concord Lake Road. A fire hose was uncoupled and stretched across the firetruck bay, signaling that the station is operational.

“This new station serves as a beacon and a symbol of where we are and where we are going,” said Kannapolis Mayor Darrell Hinnant. “A fire department with great firefighters who will continue to serve our city’s residents with excellence as our population grows.”

Fire Station No. 3 was relocated from Florida Avenue because a larger station could not be constructed at that location. The new site on Concord Lake Road is more central and in a commercial area and will facilitate quicker response times to a larger part of the city.

The original Fire Station No. 3 was built more than 50 years ago in 1967 and had 3,200 square feet with two bays, while the new one has 11,000 square feet with two larger bays, eight bedrooms and four bathrooms. The original station was made to be a volunteer department with no areas for sleep or training, so firefighters were using a mobile structure for living quarters.

“Our firefighters working out of Station No. 3 have waited years for this day,” Hiers said. “The citizens of Kannapolis can be as proud of this station as I am the courageous men and women who make up the Kannapolis Fire Department.”