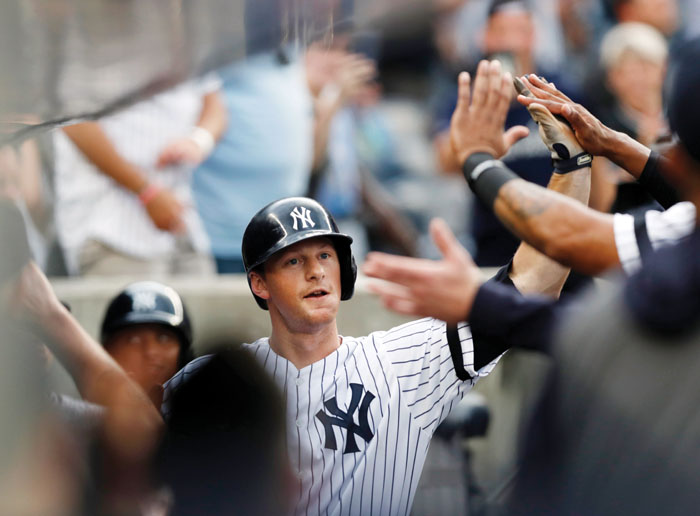 New York Yankees' DJ LeMahieu celebrates with teammates after hitting a solo home run during the first inning of the team's baseball game against the Toronto Blue Jays, Tuesday, June 25, 2019, in New York. With the home run, the Yankees broke a record in the majors for consecutive games with a home run. (AP Photo/Kathy Willens)

Gleyber Torres and Edwin Encarnación each poked a solo shot over the short right field porch for the Yankees, who shook off another injury to Giancarlo Stanton and won for the 10th time in 11 games. The AL East leaders are 8-1 on a 10-game homestand that wraps up Wednesday.

Aroldis Chapman allowed a run in the ninth before retiring Freddy Galvis on an easy grounder with two aboard for his 23rd save in 25 tries.

Stanton exited in the fourth with a bruised right knee and was scheduled for an MRI. He got tangled up with Toronto pitcher Clayton Richard (0-4) in the first while getting thrown out on a headfirst slide into third base.

The slugger just returned last Tuesday from a string of injuries to his biceps, shoulder and calf.

Nonetheless, the Yankees wasted no time rewriting the record book on this night.

LeMahieu hit his fourth career leadoff shot into the second deck down the left field line, breaking a mark New York shared for one day with the 2002 Texas Rangers, who also homered in 27 consecutive games.

The Yankees quickly added another one, too. Judge followed LeMahieu with an opposite-field drive into the right field stands. It was the first home run since April 20 for Judge, who returned Friday from an oblique injury that sidelined him for two months.

It was the second time this season and 11th in franchise history the Yankees started a game with consecutive home runs.

Danny Jansen’s double in the sixth set up Eric Sogard’s sacrifice fly and an RBI single by Vladimir Guerrero Jr. that chased Cortes and cut it to 3-2. Tommy Kahnle escaped trouble with two strikeouts and Stephen Tarpley, recalled from Triple-A earlier in the day, tossed a perfect seventh.

Zack Britton worked a 1-2-3 eighth and Chapman got three outs. Randal Grichuk’s run-scoring single with two outs trimmed it to 4-3.

New York improved to 7-0 when starting an opener.

When the Yankees play the rival Red Sox in London this weekend, fans on the other side of the pond will get a firsthand look at new-age baseball: New York plans to start an opener again in the series finale Sunday.

BALTIMORE (AP) — Manny Machado marked his return to Camden Yards with a performance reminiscent of his time with the Orioles, hitting a long homer and driving in two runs to help the San Diego Padres beat Baltimore 8-3 Tuesday night.

Machado played seven years with the Orioles before being traded last July, months before becoming a free agent. The third baseman signed a 10-year, $300 million contract with the Padres in February.

Back at the stadium where he made his major league debut in 2012, Machado received a standing ovation from many in the crowd of 21,644 before striking out in the first inning. In the third, however, he hit a shot off Jimmy Yacabonis (1-2) that traveled an estimated 455 feet and added a run-scoring single in the fourth.

MIAMI (AP) — Max Scherzer struck out 10 in eight innings and won his fifth straight start, leading the Washington Nationals over the Miami Marlins 6-1 on Tuesday night.

Scherzer (7-5) is 5-0 with a 0.92 ERA over his last seven starts and has fanned exactly 10 in three straight games. He allowed five hits and one run while throwing 71 of 94 pitches for strikes.

Franco hit a shot to right off Wilmer Font (1-2) for his 18th homer, lifting the Phillies to a 6-5 lead in the sixth inning. Miller made it back-to-back shots when he went deep for a pinch-hit homer.

There was one more shot in the inning — Kingery was drilled on the left shoulder by a Font fastball. Home plate umpire Joe West immediately warned both teams, and Phillies manager Gabe Kapler burst out of the dugout to argue. Kapler was quickly ejected for the second time in four games, likely grumbling that it was Font that needed to get tossed.

BOSTON (AP) — Chicago White Sox shortstop Tim Anderson has left the game at Boston in the bottom of the fifth inning with an injury to his right leg.

Anderson planted his right foot awkwardly on the wet dirt behind second base after fielding a grounder and throwing to first Tuesday night. He hopped a few steps on his left leg before falling to the ground in obvious pain.

Manager Rick Renteria and a trainer put Anderson on their shoulders and helped him to the dugout, keeping all weight off his right leg.

The start of the game was delayed 24 minutes because of rain, which continued to fall — heavily at times — through the first five innings.

Leury Garcia moved in from center field to play short and Ryan Cordell came off the bench and took over in center.